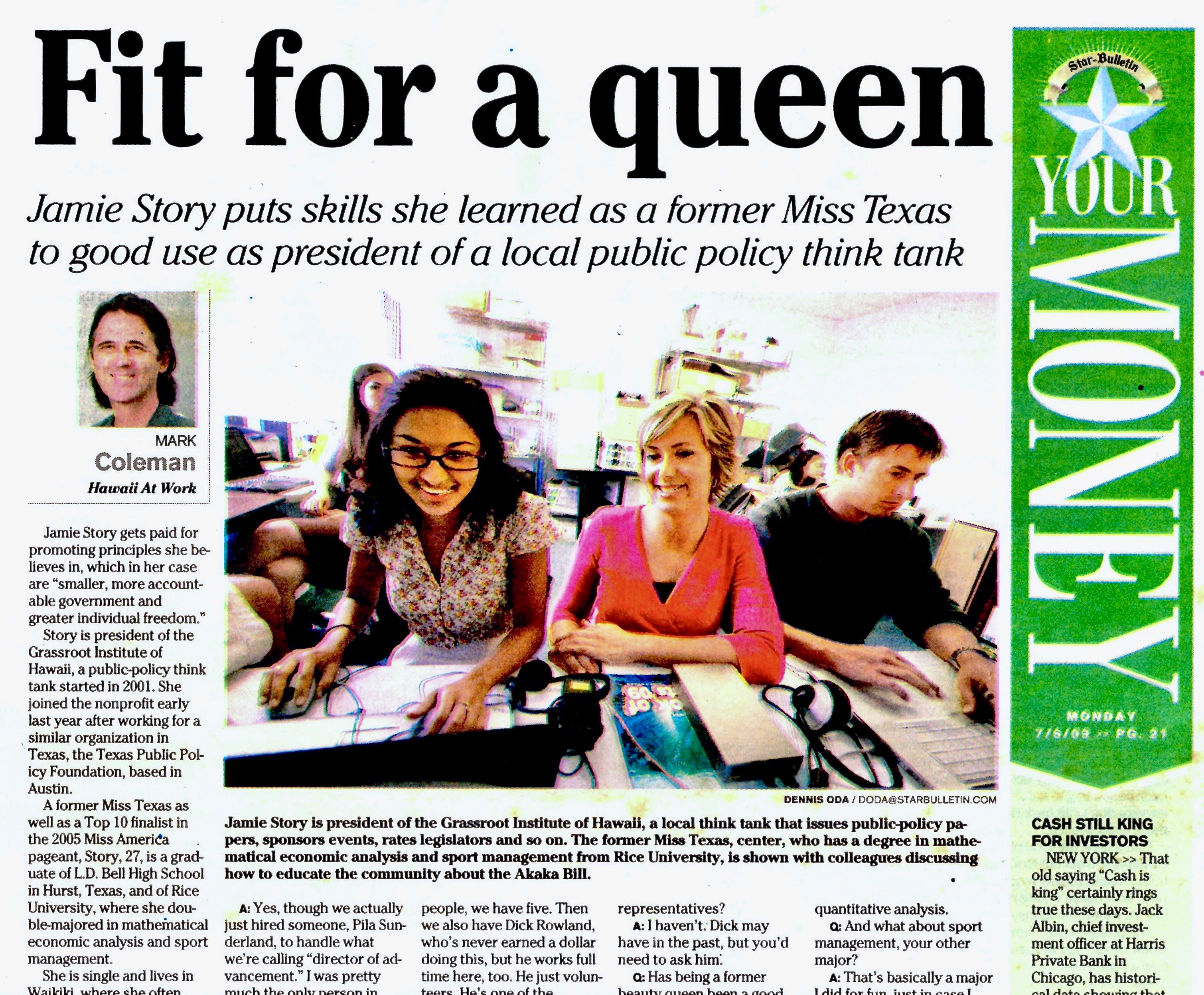 This interview originally appeared in the Honolulu Star-Bulletin on July 6, 2009.

Jamie Story gets paid for promoting principles she believes in, which in her case are “smaller, more accountable government and greater individual freedom.”

Story is president of the Grassroot Institute of Hawaii, a public-policy think tank started in 2001. She joined the nonprofit early last year after working for a similar organization in Texas, the Texas Public Policy Foundation, based in Austin.

A former Miss Texas as well as a Top 10 finalist in the 2005 Miss America pageant, Story, 27, is a graduate of L.D. Bell High School in Hurst, Texas, and of Rice University, where she double-majored in mathematical economic analysis and sport management.

She is single and lives in Waikiki, where she often swims with the idea of participating someday in a 2.4-mile “rough water” contest.

“I don’t think I can do that yet,” she said last week, “but we’ll see. I keep practicing.”

Mark Coleman: What are your responsibilities as president of the Grassroot Institute of Hawaii?

Jamie Story: They’ve changed a little over time because we’ve grown, but ultimately I’m responsible for hiring good people — and finding the money to pay them! (Laughter) And then, as there’s time, I get to do some writing myself, and media appearances and stuff like that.

Q: What kind of writing?

A: My background is as an education policy analyst, so when there is some time, it’s usually on education, but really it’s anything, like letters to the editor, commentaries.

Q: And you’re involved with the fundraising, too?

A: Yes, though we actually just hired someone, Pila Sunderland, to handle what we’re calling “director of advancement.” I was pretty much the only person in charge of raising money until I hired him, so I’ll be assisting him as needed.

Q: What kinds of people help support the institute?

A: Oh, all different types. We have hundreds of members and people giving anywhere from $2 on up; mostly individuals and then a few private foundations.

A: Not really. We’d be happy to take some, but in Hawaii the businesses are usually too scared to get politically involved.

Q: Why did you want to work for the Grassroot Institute?

A: Well, I’m passionate about the free market, and this really was an opportunity I couldn’t turn down, an entrepreneurial position promoting principles I believe in.

Q: How many people work at the institute, and what are their duties?

A: As far as full-time people, we have five. Then we also have Dick Rowland, who’s never earned a dollar doing this, but he works full time here, too. He just volunteers. He’s one of the founders of the Grassroot Institute, and he was president until I came on board last year.

Q: In terms of your duties with the institute, do you get out of the office much?

A: Oh yeah. The goal is for me to be out of the office as much as possible.

A: Two things really: either sharing information, and that could be with community organizations or with the media, and then the other is convincing people to invest in our work.

Q: What about making visits to the Legislature or the City Council?

Q: Have you ever had meetings with our federal representatives?

A: I haven’t. Dick may have in the past, but you’d need to ask him.

Q: Has being a former beauty queen been a good thing for you, on balance?

A: (Laughter) Well, we call them â€œ;titleholdersâ€; these days. (Laughter) But I think it’s been extremely helpful, as far as the experience goes, because I had spoken to groups of hundreds, if not thousands, of people before, and that’s one of my favorite parts of my job now, is public speaking.

Q: Is there a point at which that part of your background is a burden?

A: Certainly it’s one thing that someone could pick at, if they wanted to try to marginalize me. I think it’s inaccurate for them to do so, but certainly it’s happened before.

Q: Speaking of your background, what is mathematical economic analysis, which was one of your bachelor-degree majors at Rice University?

A: It’s essentially an economics degree but with extra course work in quantitative analysis.

Q: And what about sport management, your other major?

A: That’s basically a major I did for fun, just in case I wanted to enter the professional sports world someday. I’m a pretty big baseball fan.

Q: Do you feel like you’re making a difference working for the institute?

A: I do. You know, sometimes the nature of what we do here, you don’t always see immediate results, but I will say that we published the first-ever â€œ;pork reportâ€; this year, and since then we’ve seen additional columns and articles investigating the government by the local media.

Q: What’s your favorite part of going to work every day?

A: Oh, it’s definitely the people I get to work with. We’ve got a fun and eclectic group of people here.