Dick Rowland: The Grassroot Institute founder promotes the cause of liberty 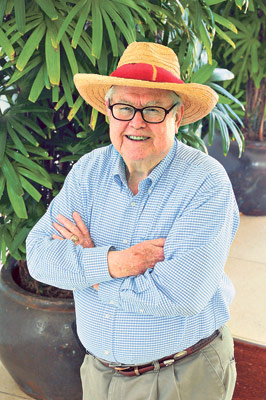 This interview was originally published May 6, 2011, in the Honolulu Star-Advertiser.
Photo by Craig T. Kojima.

Richard “Dick” Rowland was 71 when he set up the Grassroot Institute of Hawaii with the goal of educating isle residents about individual liberty, the free market and limited government.

That was 10 years ago. Now Rowland is back at the helm of the nonprofit — which has three full-time employees and an annual budget of $400,000 — filling in as acting president until a replacement can be found for Jamie Story, who was president of the group for three years before she returned last month to her native Texas.

Rowland also is from Texas; he graduated from high school in Port Arthur and has a bachelor’s degree in agricultural economics from Texas A&M. He also has a master’s degree in educational administration from Columbia University in New York that he earned while in the U.S. Army, in which he served for 23 years before retiring in 1975 as a colonel. In Hawaii since 1971, Rowland next had a successful, 26-year career as an insurance salesman with Northwestern Mutual, from which he retired to start the Grassroot Institute. Rowland lives in Aiea with his wife, Marie, with whom he has three grown daughters.

Question: What is the Grassroot Institute’s purpose?

Answer: The ultimate purpose is to get the people of the state to look at government as a servant and not as a source of revenue. And to get them to understand that there’s no such thing as a free lunch, that everything has to be paid for.

Q: How’s that working, in terms of the purpose?

A: It’s slow but sure. The fact is that any kind of a movement is generally one person at a time. Every now and again you get some phenomenon like the tea party, which tends to look like it appears spontaneously, but, you know, if it wasn’t for the Declaration of Independence, and the ideas that are enunciated in it, there would never be a tea party.

Q: What would you count as one of the institute’s biggest policy successes?

A: I think the biggest thing we have done is to become the rallying place where people who want smaller, more effective and more responsive government can get together with like-minded people. …

By the way, another driving force behind the formation of the Grassroot Institute was the concept of putting politics into a two-dimensional picture: You’re either going north toward individual liberty and the vision of the founders of the United States as enunciated in the Declaration of Independence, or you’re going south toward the vision of statism, in which the state gets bigger and bigger and bigger. Because of that we find that we don’t pay much attention to the left and the right. We do pay attention if something is going right, but we want it to be right and north (laughs), and if it’s going left, we want it to be going left and north.

So that makes things a lot simpler from the standpoint of trying to bring people into our ohana. Because, you see, the bigger the government gets, the smaller you get, and so you finally end up in some system that’s all government-operated — communism, or Nazism or one of those things. You end up with the government having so much power that all the people who have been going right or going left and screaming at the top of their lungs are all equally serfs.

A: Sure am. As a matter of fact, we have a donor who provides me with copies of the book that we give out at various meetings.

Q: What kinds of things does the institute do to reach out to supporters?

A: We have events. And then we do thoughtful papers — investigations and policy papers.

Q: What are some recent topics?

A: “The Real State of the State” is a recent topic, by Danny de Gracia. It’s an uncensored report about the fiscal challenges facing Hawaii. It’s on our website.

Q: What is the state of the state, in your opinion?

Q: The institute has always been out front on the Akaka Bill, being opposed to it. Where do you think that stands?

A: I think momentarily it’s kind of halted. We’ve got some activity going on at the state level, but better minds have prevailed on the national scene, and so I don’t think it’s going anywhere nationally for a while, at least, unless or until there’s a change in the political climate.

A: Yeah, boy, is that popular. We’re doing a new one right now.

Q: Is it that hard to find places to cut government spending?

A: No, the pork report covers probably 1 percent of the waste and silliness that goes on. It’s a happy hunting ground. We turn interns loose on it and they find all kinds of things. [Editor’s note: The 2010 pork report claimed to have found about $300 million in wasteful Hawaii state spending.]

And, you know, that leads me to perhaps one of my favorite subjects, and that is that one of the things that is wrong with our whole political system is that over the years, slowly but surely, there has evolved a system in which it’s very, very difficult, if not almost impossible, to hold elected officials accountable.

The mystery is, to me, why in the world do we have a different standard for government than we do for private enterprise, or for private companies? If a private company ran the schools like the Department of Education did, they’d go broke, they’d be canned. And then there’d be somebody else to take their place and eventually we get some efficiency and some educated students, perhaps.

Q: Do you have any pearls of wisdom for the governor?

A: Please have an epiphany. (Laughs) No, I don’t have anything for the governor. You know, I think most of the people who are advocating more government interference and so forth don’t see that once they do that it’s the old thing about the slippery slope: How do you stop it before it just consumes everything?

I think our job is to try and slow it down, bring it to a halt and just start turning things into a direction where the individual has more freedom, more responsibility and more accountability.

Q: What about Mayor Peter Carlisle?

A: (Long pause.) I think I would say to him, “Control your checkbook.” The obligations for the future for the city are downright frightening. Just two things — the sewer business and the rail — are just awesome problems.

I went to Washington, D.C., recently and I landed at Reagan National Airport and I went outside to catch a cab and I looked up at the train — the Metro or whatever the heck they call it — and everything was rusting up there — the platform and all this stuff — and I’m thinking, “Oh my, repairing that sucker is going to cost as much as it took to install it.” And, you know, that’s what we have to look forward to in our future. (Sigh) Except I won’t be here.

Q: You won’t be here? You going somewhere?

A: (Laughs) I think by then, you know, the Lord will see my thumb sticking out and pick me up, as a hitchhiker, yes.