Sustainable Development is an Oxymoron 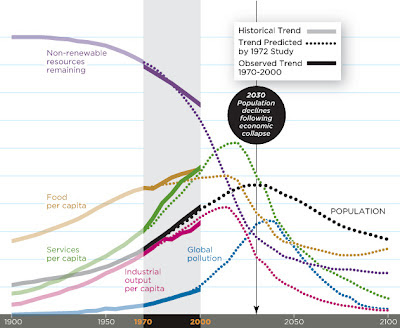 On March 2, 1972, a team of experts from MIT presented a groundbreaking report called The Limits to Growth. Read more in the Smithsonian Magazine.

More recently, Australian physicist Graham Turner of CSIRO Sustainable Ecosystems shows how actual data from 1970 to 2000 almost exactly matches predictions set forth in the “business-as-usual” scenario presented in The Limits to Growth.

Looking at the thick line updates of the 1972 trends, I find the energy trend alarming. The rest of the trends do no seem to be as alarming as originally forecast in 1972. Significantly, the population growth in China is under substantial control. But growth in China, Brazil and Nigeria counterbalance the population reduction of China.

The retired MIT professor who led the original study had this to say:

Panos Prevedouros is a member of the Grassroot Institute of Hawaii’s Board of Scholars.

Panos Prevedouros’ blog, which is from where this has been reposted (with permission), can be found at :http://fixoahu.blogspot.com

Panos D. Prevedouros, Ph.D. is a professor of traffic and transportation engineering at the Department of Civil Engineering, Univ. of Hawaii-Manoa since 1990. Panos graduated from the Aristotle Univ. of Greece in 1984, and with Masters and PhD degrees in 1990 from Northwestern Univ. (Evanston, IL), a leading academic institution in engineering and transportation. He chairs the Freeway Simulation Subcommittee of the Transportation Research Board. He was president of the Hawaii Highway Users Alliance from 2006 to 2008. Panos co-authored a Transportation Engineering textbook and over 100 reports and technical papers. He received the 2005 Van Wagoner Award of the Institute of Transportation Engineers. He co-organized the 1st International Symposium on Freeway Operations (ISFO) in Athens, Greece, and the 2nd ISFO in Honolulu in June 2009. Dr. Prevedouros served in the Transit Advisory Task Force in 2006 and in the Technology Selection Expert Panel in 2008 of the City Council of Honolulu. He ran for mayor of Honolulu in the 2008 elections and finished 3rd in the primary elections with 18% of the vote from a field of nine candidates.