Constitution 201: Woodrow Wilson and the Rejection of the Founders’ Constitution

This article was originally published here on Hawaii Reporter.

This lesson is taught by Dr. Ronald Pestritto, Charles and Lucia Shipley Chair in the American Constitution, Associate Professor of Politics, and Dean of the Graduate School of Statesmanship at Hillsdale College. Dr. Pestritto is a senior fellow at Hillsdale’s Kirby Center for Constitutional Studies and Citizenship. He teaches courses in American politics and political philosophy. Dr. Pestritto is also a senior fellow at Claremont Institute and an academic fellow of the Foundation for Defense of Democracies. He has published extensively, both books and articles, particularly concerning his main focus on the political thought of the Progressives. He received his BA from Claremont McKenna College, and his MA and PhD in Government from Claremont Graduate University. This lecture was posted on the internet September 17, and those interested may register at constitution.hillsdale.edu. There is no fee. The next lesson in this series will be Overview: Founders vs. Progressives, taught by Dr. Thomas West.

We must ask why Woodrow Wilson, and other Progressives, wanted to transform theUnited Statesfrom a constitutional republic into an administrative state. Wilsonwas first an academic, and he continually disparaged politics as dirty, corrupt, and in the control of corporate special interests. On the other hand, he viewed the rising science of government administration as a potentially pure and objective enterprise, fit for the direction of experts with university training.

“The Study of Administration” is an 1886 essay from the early period ofWilson’s scholarly career; it captures his lifetime beliefs about the place of public administration in national government. Wilsonidentifies the role of administration in three periods of historic development found in modern nations. In the time of absolute rulers, the administrative system is adapted to absolute rule. Administration can be popular or not as a ruler is enlightened or not. When popular control is substituted for absolute rule, constitutions are framed to establish and protect the transfer of power. Administration is neglected for these higher concerns. A third historical phase occurs when the sovereign people are secure enough in their power to turn their attention to the efficient and effective organization of government administration. In Wilson’s view theUnited Stateswas overly concerned with Constitutional principle and tardy in addressing administrative necessity. “The English race, consequently, has long and successfully studied the art of curbing executive power to the constant neglect of the art of perfecting executive methods. It has exercised itself much more in controlling than in energizing government. It has been more concerned to render government just and moderate than to make it facile, well-ordered, and effective. English and American political history has been a history, not of administrative development, but of legislative oversight.”

Constitutions are to properly concern themselves with those government institutions establishing general law. The detailed execution of such plans is the province of administration. The people through their representatives establish broad policy, while expert administrators apply policy to particular cases.

This theory provides substantial power to unelected administrators, certainly much more power than the Founders would have found congenial. Yet, we need only consider the powers of agencies like the EPA, or like Health and Human Services under the Affordable Care Act, to see howWilson’s view of an administrative state has influenced our contemporary government practices.

We have already discussed how Wilson considered separation of powers as at the heart of what was wrong with national government. Government must not be mechanical a laNewton, but adaptive a laDarwin. An organic government is undone by the limitations of checks and balances. At the level of general policy, there should be no roadblocks in the way of popular will. In a true democracy, the government will efficiently implement that for which the people vote. New historical conditions create new problems requiring new solutions from the government.

Wilsonadvocated the separation of politics and administration as a substitute for the separation of powers. Politics would be substantially democratized to allow changes in broad general policy decisions, while national administration would be empowered by freeing it from the corrupt influence of politics. Again from “The Study of Administration”: “I know that a corps of civil servants prepared by a special schooling and drilled, after appointment, into a perfected organization, with appropriate hierarchy and characteristic discipline, seems to a great many very thoughtful persons to contain elements which might combine to make an offensive official class….Certainly such a class would be altogether hateful and harmful in the United States….Steady, hearty allegiance to the policy of the government they serve will constitute good behavior. That policy will have no taint of officialdom about it….The ideal for us is a civil service cultured and self-sufficient enough to act with sense and vigor, and yet so intimately connected with the popular thought, by means of elections and constant public counsel, as to find arbitrariness of class spirit quite out of the question.”

On the one hand, we should recognize that politics has been too unresponsive and inefficient, and that we need to drastically reduce the distance between evolving public opinion and the establishment of broad general policy. On the other hand, the real future power of government should be in the hands of university trained administrators practicing rational and objective governing at the level of particulars. We must keep politics out of administration’s way.

When viewed from the perspective of consent of the governed, this combination is something of a set of paradoxes. On the one hand, the Founders were too concerned about the adverse consequences of ephemeral popular passions. We should pursue an end to checks and balances, and a more democratized politics. On the other hand, we should insulate our thoughtful administrators from corrupt political influences. On the one hand, trained administrators could be relied on to coolly and objectively implement broad public policy. On the other hand, the cacophony of opinions among a motley assortment of American types adversely compromises any detailed decision making. Wilsontried to square the circle by distinguishing between the general and the particular, but his solution begged many questions. Nevertheless, it is true today that most of our opinion leaders consider it a bad thing for Congress to intervene into matters that might be best left to “the experts” in the bureaucracy.

Madison had warned that men are not angels, and are not governed by angels—that men are subject to the realities of unchanging human nature. Wilsonbelieved that human nature had changed for the better through historical development. Madisonwould have warned that a specially schooled corps of civil servants would be as subject to power abuse as any other men. Wilsonbelieved we could rely on the intimate connections of the civil service to popular thought. Of course, this would mean that civil servants would never be subject to personal prejudices and interests, would never be captured by powerful interest groups, would never enmesh themselves in a bureaucratic culture. Yeah, sure.

Wilson noted that the Constitution provided no focal point for leadership; rather, there were leaders of the several branches. Wilson believed that leadership must be lodged in some man or group of men (institution) who could transcend the separation of powers and bring all of government together in a unified direction. Wilson’s ideas of where this locus of leadership must be were to change over time. At first, he thought Congress was the right place. He became disillusioned with that idea after some years of actually observing Congress in action (or inaction). By the time he published Constitutional Government of the United States in 1908, he had observed the energy of Teddy Roosevelt, and had come to the idea that the appropriate locus of leadership is the President. What America needs “is a man who will be and who will seem to the country in some sort an embodiment of the character and purposes it wishes its government to have, a man who understands his own day and the needs of the country…”

The President is the only person for whom the whole nation votes. He is the only person who can embody a national will, a very powerful consequence of the office. Wilsonadvised that there are two ways to think about the President. He is the legal executive as established in the Constitution. His powers here are limited by Constitutional provisions, and by the realities of necessary delegations of authority to his department heads and supervisors. The President is also the extra-constitutional political leader. His powers here depend on whether his public popularity will enable him to move the other branches to action. He possesses a popular mandate that allows him to lead the whole government, not just the executive branch, through his rhetorical and leadership skills. He has what TR called “the bully pulpit.”

Wilson was obsessed with the art of rhetoric, and was active in debate and public speaking throughout his life. He believed the essence of leadership is the ability to see the path history has established, and to effectively use rhetoric to convince others to follow that vision. The President must both embody the popular will and be able to clearly and convincingly express that will by drawing attractive pictures of the future. If you readWilson’s writings and speeches, you will experience a masterful ability to illustrate his ideas in analogies of pleasing pictures.

Wilson could be overconfident in his rhetorical skills. He attempted to convince the people to pressure the Senate to ratify the Treaty of Versailles, which included a provision for aLeague of Nations. Wilsonhad bypassed Republican Senators in negotiating the treaty, and it was never possible to put together a two thirds majority for ratification. We had to execute our own separate treaty with Germany and its allies, and we never joined the League. Stress from the ratification effort may have contributed toWilson’s stroke and resulting incapacity at the end of his administration.

The influence of Wilsonian Progressivism may be clearly seen in the operation of today’s democratized political institutions, and in the substantial power of an unelected independent national administration. Nevertheless, Wilson’s idea of responsive, objective, rational rule by disinterested experts far overstates the reality of the operation of the administrative state. One may call what we have created a case of Madison’s revenge.

Stephen Zierak, CPCU/ARM, graduated from Boston University with a BA in Political Science in 1969. After a forty year career in property casualty insurance underwriting, Mr. Zierak retired as a Vice President of Swiss Re America in 2010. At that time, he relocated to Hawaii, a move he had always wanted to make, but had delayed due to lack of appropriate professional opportunities here. Mr. Zierak plans to continue his studies in Political Science, never really abandoned even during his professional career, and to write on matters of public policy. Recently, he produced for Grassroot Institute summaries of Hillsdale’s ten part internet course on our Constitution. Stephen Zierak is married to the love his life, Teodora, and they reside in Honolulu. 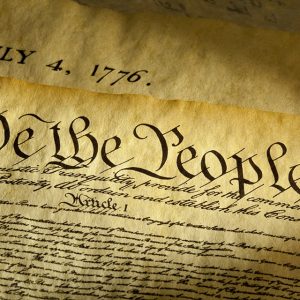