Is Illinois Hawaii’s Canary in the Coal Mine? 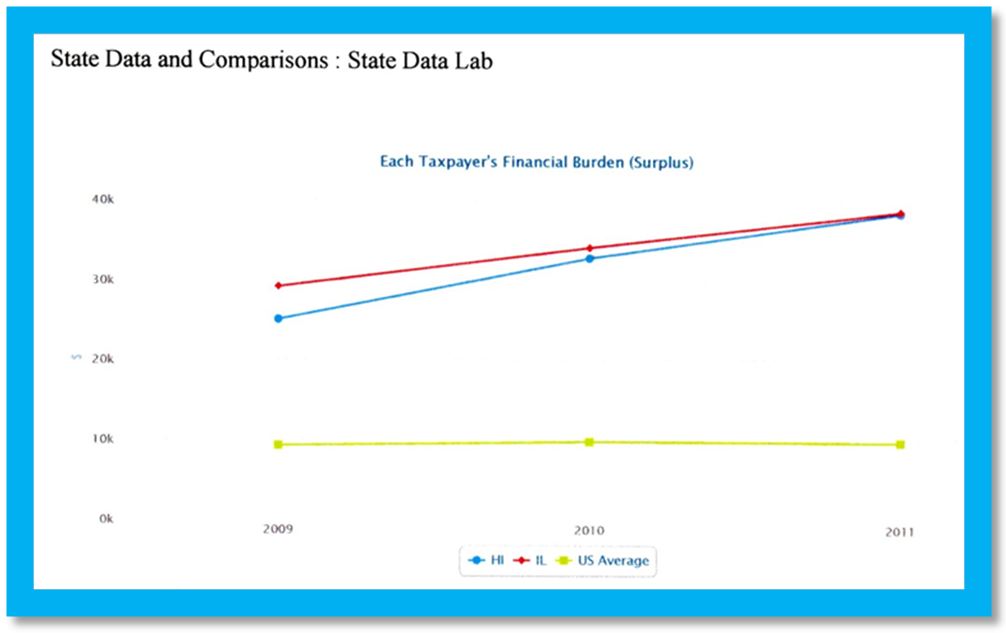 Irresponsible management of government finances has caused Standard & Poor’s to drop its Illinois credit rating to A-.  This is not like your improvement in school that brought your C to an A-, thus making your parents pleased and proud you had finally learned something.  No, it is another step down the road towards junk bond status for one of our largest states.  S&P has ten investment grade ratings, from AAA to BBB-, and A- is 7th out of the 10.

Only one other state has been rated as low as A- in the past ten years, and that is California, another state with persistent mismanagement of government obligations.  Now Illinois has attained that dubious distinction.  Unlike private businesses, state governments can compel revenue via taxation.  It is unusual  for state governments to carry low ratings.  However, at some point credit ratings agencies have to wonder whether it is really possible for a state to raise enough taxes to cover ever increasing long-term obligations.  S&P referenced the level of state pension underfunding as a primary reason for the rating drop—and for the negative outlook that means Illinois’ rating could fall further into the BBB area.  All this is not due to low taxes.  Indeed, Governor Quinn and the Illinois legislature have boosted taxes to the point that Illinois is not economically competitive with surrounding states.  Yet, Illinois has only $23 billion in assets to cover accumulated long-term liabilities of $182 billion, of which unfunded pensions contribute $83 billion and unfunded retiree health care $45 billion.  Each Illinois taxpayer is on the hook for over $38 thousand (as of 2011 statistics) to pay their share of the unfunded liabilities.  This burden is not only well over the all states average of around $10 thousand, but has been on a pronounced upward path for the past several years.

Somehow it must have escaped the attention of S&P that our very own bullets and beaches economy features Illinois-like mismanagement of state pension obligations, just on a smaller scale.  Hawaii has $4 billion in assets to cover accumulated long-term liabilities of $23 billion, of which unfunded pensions are $6 billion and unfunded retiree health care is $14 billion.  While an obligations ratio of six times assets may be a bit better than Illinois’ ratio of eight times assets, our taxpayer burden (as of 2011) is also over $38 thousand, and has been growing even faster than in Illinois over the past three years.  To provide some context, Hawaii’s total state budget is in the $5 billion area.  Yet, we still carry an S&P rating of AA, 3rd out of the 10 investment grade ratings.  That puts us in the bottom 40% of states, but is not a credit rating crisis—for now.

The purpose of the canary in the coal mine was to warn the miners of dangerous air below.  The most foolhardy miner would not continue down the shaft until the problem was resolved.  The Illinois rating downgrade gives warning that states with large unfunded liabilities will be evaluated as to the likelihood that taxes can be raised sufficiently to deal with them.  States operating uncontrolled pension/retiree health systems, like Hawaii, must eventually face credit downgrades, making our bonds more expensive to finance, not to mention the financial destruction that will occur as the bills come due.

So, will Governor Abercrombie and the legislature rein in further expansion of retirement obligations?  Will they convert some of their excessive spending into a funding program for past promises to retirees?  Do they have the common sense of the miners who knew to avoid clear dangers suggested by the fate of the unfortunate canary?

While Hawaii’s fiscal position becomes ever more precarious, the legislature is taking up the really important bills.  People have to be bullied into wearing their seat belts, so our nanny state is planning to expand mandatory seat belt use to the back seat passengers.  Thank goodness we will no longer have to worry about some idiot injuring himself due to inadequate seat belt-ness!  He will have to find some other way to injure himself!  And who can live on a $7.25 minimum wage?  The legislature is studying a state minimum wage of $8.50.  Pikers!  Why not $15?  After all, $30 thousand a year is hardly princely wages.  Hawaii businesses will find a way to pay it—somehow.

As Hawaii’s political class continues to concern itself with nonsense, the rating downgrade is putting additional pressure on Illinois politicians.  A modest pension reform bill is before the Illinois legislature, although it is opposed by all the usual suspects, even now.  State and municipal politicians are looking for creative ways to offload state and city irresponsibility onto federal irresponsibility.  Rahm Emanuel, now Mayor of Chicago, at one time point man for Obamacare, has come up with a really clever idea.  A 25 year old legal settlement that has required Chicago to pay between 40% and 55% of its retirees’ health care costs is about to expire.  If it is continued, the $194 million bill for this year will grow to $540 million by 2023.  It would cost tens of billions to fund a going forward obligation.  So, Chicago will probably dump all the pre-Medicare retirees onto Obamacare.  The subsidy structure of Obamacare will actually mean that most of the retirees will pay less than what they now pay under the Chicago program.  Let the federal taxpayers pick up Chicago’s bill!  (We might remember that critics of Obamacare suggested that businesses and governments would do precisely this:  offload health care obligations onto the exchanges.  This will drive Obamacare costs through the roof.  In the case of retirees, there is not even a modest penalty to be paid since coverage for retirees is not “mandatory.”)

Progressives sell their vision of government as a triumph of good planning and expert execution.  Not much of that to be found in Illinois—or in Hawaii.  Here in paradise, under the warm winter sun, it is always pau hana.  The weekend is always upon us, time for sipping mai tais while looking out on white sands and blue waters.  Don’t worry, be happy!  Tomorrow is but another day.

For those of you who do have the sense to examine the canary’s condition, please consult the chart below.  It will give you something real to consider.  Note the taxpayer burden increases for Hawaii, compared to all states flat line—and how Hawaii has caught up with Illinois.  This will not end well for us. Stephen Zierak, CPCU/ARM, graduated from Boston University with a BA in Political Science in 1969.  After a forty year career in property casualty insurance underwriting, Mr. Zierak retired as a Vice President of Swiss Re America in 2010.  At that time, he relocated to Hawaii, a move he had always wanted to make, but had delayed due to lack of appropriate professional opportunities here.  Mr. Zierak plans to continue his studies in Political Science, never really abandoned even during his professional career, and to write on matters of public policy.  Recently, he produced for Grassroot Institute summaries of Hillsdale’s ten part internet course on our Constitution.  Stephen Zierak is married to the love his life, Teodora, and they reside in Honolulu.