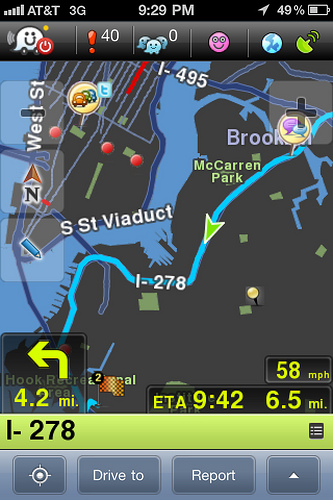 Google’s acquisition of Waze hints at decisive digital technology shifts for the next presidential election. The RNC has hired a young new Chief Technology Officer, Andy Barkett, from Facebook.  It is much to be hoped that RNC Chairman Reince Priebus will do what is needed — both in tech and policy — to get the Republicans to start winning again.

Why does Waze matter?  For those just returned from the ISS, Waze, which crowdsources mapping, is a big breakthrough. It is going to change how we live.  Of far greater significance to business and investors … it will change how we shop.

How is this relevant to politics?  Because the more you know about your customers (in politics, voters), the better you can serve them and the more you (and they) will thrive. Facebook FB -4.12%, as recently explained in theAtlantic Monthly, begins to look like the wave of the past.

The Republican National Committee recruited Barkett from, most recently, a brief gig at Facebook. According to the HuffPo:

In 2006, Barkett went to work for Google GOOG -1.79%, where he was a technical program manager for two years. During that same period, he co-founded Greenlight Apparel, a “fair-trade, organic clothing company.”

Barkett left Google in 2008. He was a senior IT management consultant at Taos Mountain Inc. for several months, then a senior director for engineering at Livescribe Inc. for almost two years. In January 2011, Facebook hired Barkett as an engineering manager.

GOP technorati wish Barkett well.   The big question being quietly asked has little to do with his qualifications.  It is whether Chairman Priebus really will give him the level of authority (and the political heat shield) he needs to get the job done.  The Obama campaign gave its Ubergeek, Harper Reed, serious authority.  The RNC has a history of undermining the authority of its tech execs.   Will Chairman Priebus protect Barkett from meddling by clueless National Committee people (on a majority of whose votes Mr. Priebus’s chairmanship depends)?

Barkett’s technical credentials are impeccable.  The jury, necessarily at this stage, remains out on his strategic political cred.  Facebook, his most recent gig, is built on what are called “weak bonds.”  This columnist calls Facebook the “High School Cafeteria of the Internet.”

Harper Reed got his chops from Threadless.com.  Threadless uses a vastly different model of user engagement than does Facebook.  Threadless is a crowdsourcing icon.  Threadless is fundamentally different, too, from Barkett’s Greenlight Apparel a good but generically top down business-to-consumer e-commerce business.

What do Threadless, Narwhal (the Obama 2012 campaign tech) and, yes, Waze have in common (that Facebook, Greenlight, and Romney 2012’s Orca do not)?  Crowdsourcing.  Crowdsourcing is geek speak for honoring the American principle known as subsidiarity: delegating authority to the front lines.  Subsidiarity is at the tactical heart of the left’s recurring victories.

Central planning vs. subsidiarity is a critical distinction.  Weirdly, it is the libertarian faction that is pushing central planning on the Grand Old Party.  And not just in tech.

“Looking ahead to the 2014 congressional races and the 2016 presidential contest, many Romney donors said they were concerned about the ease with which sharply conservative Republican candidates … had tainted the party’s image.

“A number of donors also said damage persisted from Romney’s shift to the right on issues such as … his emphasis on his opposition to gay marriage.

“The views expressed by many donors in interviews this week about the direction the party should take stood in stark contrast to the current concerns of the 168 members of the Republican National Committee, who determine the party platform and its rules.

“At an RNC gathering this spring in Hollywood, committee Chairman Reince Priebus had hoped to keep the focus on the party’s rebuilding efforts after being vastly outmanned by Obama’s campaign operation, including the Democrats’ sophisticated voter identification systems and the strength of their ground organization in the key swing states.

“Instead, many RNC members wanted to talk about how the party should not stray from its core principles on social issues, which remain singularly important to many party activists. During the meeting, RNC members unanimously pushed through a resolution affirming that marriage should be between a man and a woman.”

It is crucial for the Republicans to resolve this predicament — the tension between its two key factions.  If it fails to do so the party will end up paralyzed by what psychologists call “learned helplessness.”

There is a straightforward resolution.  The GOP thrives when, and only when, it is able to persuade its conservative and libertarian factions to collaborate.  When it has thrived it has been thanks to a doctrine called fusionism, formulated by the great Frank Meyer, described by E.J. Dionne as “utilizing libertarian means in a conservative society for traditionalist ends.”

For the GOP to seek to distance itself from its activist base makes as little political sense as would the Democratic Party ejecting, or marginalizing, its progressive base.  Alienating oneself from one’s base is a recipe for political suicide.  The suicidal implications, apparently, are not self-evident to many low-information GOP donors.

Rampant progressives are carrying out an across-the-board assault on our constitutional rights.  The First Amendment’s guarantees of freedom of speech are under assault from progressives Hell bent on repealing Citizens United.   Freedom of the press is under assault under the euphemism of “net neutrality.”  Freedom of religion is under assault from those who seek to “define devotion down” to mere liturgy.   Freedom to peaceably assemble and petition the government for the redress of grievances recently was under (and remains vulnerable to) violent assault by the IRS.

The Second Amendment right to keep and bear arms remains under shameless recurring progressive assault.  The Fourth Amendment protections against unreasonable search are being violated, in spirit if not in letter, by massive government surveillance.  The Fifth Amendment holds that “no person shall be … deprived of life … without due process of law.” The Supreme Court blithely withdrew that protection from persons awaiting transit through the birth canal.   It then sustained its withdrawal on the extra-constitutional (and philosophically incoherent) grounds of “the mystery of human life.”

The GOP can get right with both of its key factions also by leaning on the Declaration of Independence — life, liberty, and the pursuit of happiness — replacing the Declaration’s 18th century bill of particulars with a litany of 21stcentury outrages.  The Republicans’ moneyed elites have not thought through the politically suicidal prescription of marginalizing the party’s base.  But these are smart people — dummies rarely get rich. The party elite can be brought around to a smart strategy of valiant constitutionalism — which is as modern, and hip, as anything the Democrats have to offer.

The proposition that this nation, under God, shall have a new birth of freedom—and that government of the people, by the people, for the people shall not perish from the earth—is the lost soul of the GOP. It is time for the GOP to regain its soul by catching the clue train … from the Waze Craze.

Ralph Benko is an economist and pundit specializing in new media.  You can read him regularly at Forbes.com.