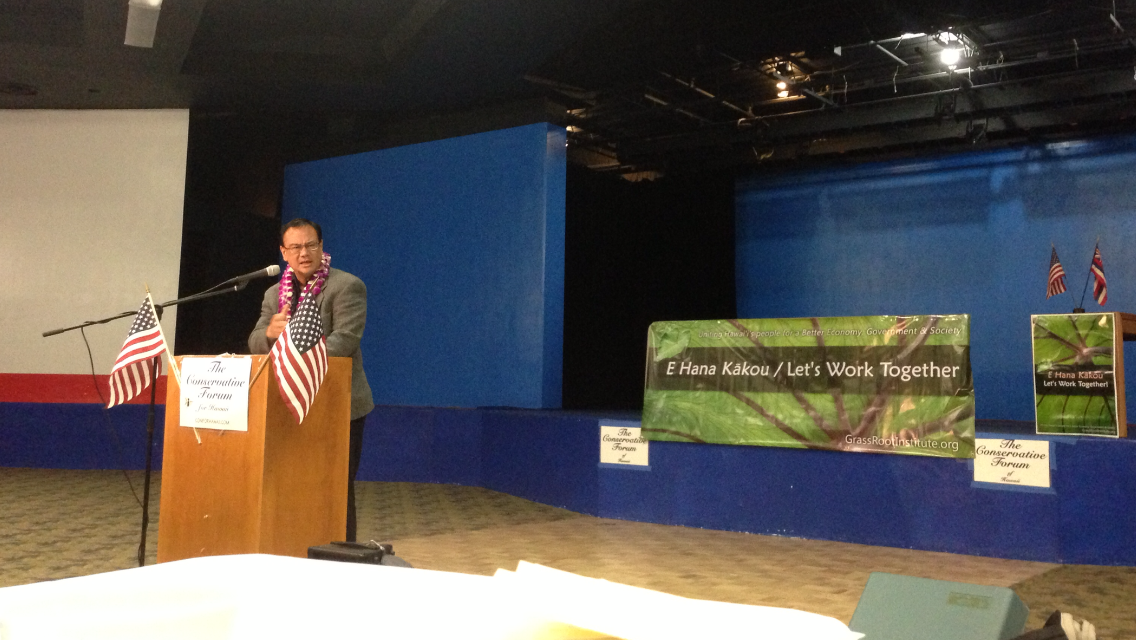 To watch Dr. Akina’s presentation in its entirety, see the video below.

By Ed Gutteling and Ross Armetta

Dr. Kelli Akina, the new CEO of the Grassroot Institute of Hawaii and former OHA trustee candidate, addressed the Conservative Forum for Hawaii at the Naniloa Hotel Crown Room in Hilo Hawaii, on Sunday June 2. Dr. Akina’s topic was “E Hana Kâkou: The Advancement of Native Hawaiians and All Residents of the Aloha State.”

He was preceded by CEO emeritus and Grassroot Institute founder Richard Rowland who spoke of the concept of promoting individual liberty in our communities “2×2”.

Mr. Rowland, Paraphrasing Ronald Reagan, noted that the true decisions facing all citizens were not between the left and right politically, but between “up and down,”

Mr. Rowland stated that the average person does not know or care about the many political ideologies and divisions of government. He believes that they evaluate the decisions as moving us “up” and towards personal liberty and well-being, or “down” the accelerating path of government restriction of liberty and reducing people’s well-being. He stressed the importance of speaking to our daily contacts: to spread this concept of how to view the political ideologies and decisions made in our society.

After Mr. Rowland finished, Dr. Akina began with the moving Oli Aloha welcoming chant taught to him by his mentor Winona Beamer, emphasizing aloha for all. He then defined the biggest threat to all Hawaii, and all Hawaiians, as being the present threat of ending the aloha spirit of inclusiveness (Relating to the Hawaiian Roll Call Bill). Specifically he addressed the Akaka Bill as wanting to impose a government entity on Native Hawaiians similar to that of Native American Indians which would establish government to government relations but impede government to people relations.

We wish to correct an inaccurate statement made by the authors of this article.  Dr. Akina did not accuse the Office of Hawaiian Affairs of “scandals of corruption and cronyism” as mentioned in “a recent series of three articles in the Honolulu Star-Advertiser.” Those articles refer to the Department of Hawaiian Homelands.