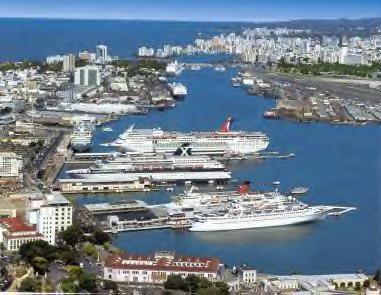 The Senate of Puerto Rico’s Legislative Assembly is planning to study the economic impact of the Jones Act on the Commonwealth.  The purpose of the study is to review the germane literature especially three recent reports addressing the Jones Act and Puerto Rico and determine what changes are needed in the law so as improve the island’s economy.

The forthcoming study would be authorized by Senate Resolution No. 237 (SR 237).  The Resolution is currently awaiting a hearing by three Senate Committees:  The Committees on Rules, Calendar and Internal Affairs; the Committee on Government, Government Efficiency, and Economic Innovation; and, the Committee on Civil Rights, Citizen Participation, and Social Economy.  After the Resolution is passed out of committee, it will go to a vote on the floor of the Senate to be adopted by a simple majority.  No action by the House would be required.

The Resolution is supported by the majority leadership in the Senate and is expected to be adopted.  The Popular Democratic Party (Partido Popular Democratico) (PDP/PPD) holds majorities in both legislative chambers and the governorship.  The current governor, Alejandro Garcia Padilla (PDP/PPD), supports an exemption from the Jones Act for Puerto Rico.

SR 237 would authorize two Senate Committees  — the Committee on Government, Government Efficiency, and Economic Innovation and the Committee on Civil Rights, Citizen Participation, and Social Economy – to undertake the study and issue a report.  The Committees will hold public hearings now tentatively scheduled for January 15-17, 2014, and they will call witnesses.

The Committee staffs will prepare the report, which is projected to be released in February 2014.

The investigative committees will start with three recent studies of the impact of the Jones Act on Puerto Rico.  The “Report on the competitiveness of Puerto Rico’s economy,” The Federal Reserve Bank of New York, June 29, 2012, which identified the Jones Act as a major impediment to the island’s economic development recommended a full exemption.  The “Characteristics of the Island’s Maritime Trade and Potential Effects of Modifying the Jones Act,” GAO-13-260, Mar 14, 2013, Government Accountability Office (GAO), which was unable to reach any conclusions regarding the liner container trade, but did recommend exemptions for the tramp bulk trades between the United States Mainland and Puerto Rico.  “The Maritime Industry in Puerto Rico,” Estudios Tenicos Inc. for La Alianzna Maritima de Puerto Rico, the trade association of the Jones Act industry in Puerto Rico, May 3, 2013, that concluded the higher freight rates in the domestic Puerto Rico trade are justified by a higher level of service.

SR 237 was introduced by Senator Rossana López León, Majority Whip and President of the Committee on Civil Rights, Citizen Participation, and Social Economy, one of the two standing Senate Committees that would be changed with conducting the study.  Senator López León invited the Hawaii Shippers Council to submit testimony to the Senate Committees hearing the Resolution, which we have done.

Senator López León will be a panelist discussing the Jones Act at an event to be held on Tuesday, November 12, 2013 by the Chamber of Commerce of Puerto Rico (La Cámera de Comercio de Puerto Rico).  The event, “Foro sobre Ley de Cabotage” (Cabotage Law Forum), will include both critics and supporters of the Jones Act.  For those on Puerto Rico, the event is open to the public and registration is still open on the Chamber’s website.

Michael Hansen is President of the Hawaii Shippers Council and an Advisor to the Grassroot Institute on issues related to the Jones Act.