A Theory of Business Regulation 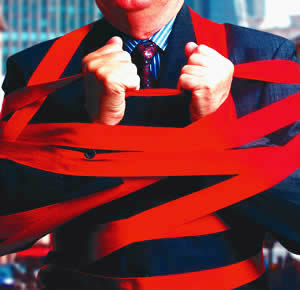 I should start out by admitting that we already have too many laws here in the United States.  There are about 375,000 pages of federal law and regulation in addition to the laws of each State and each city and county.  Clearly, if we were to add as many laws over the next hundred years as we did over the last hundred years, we would strangle our economy.  But that being said, it doesn’t follow that all business regulation is bad.

Some business regulation exists to correct for market imperfections.  One example is where the buyer cannot evaluate the price or the product on his own.  Drugs are good example of this.  If the FDA did not regulate drugs, it is unlikely that drug buyers would know all of the side effects or even the efficacy of what they were buying.  Another example is insurance regulation, where it is difficult for buyers to evaluate the premium prices or know whether the insurance company might go insolvent.  Under these circumstances, where the buyer cannot act effectively on their own, regulation is warranted.  Another example is environmental regulation which goes under the theory that businesses will only internalize the costs of their polluting behavior if the law forces them to do that.  We don’t want third parties to bear the full costs of pollution because it is not their fault.

Some business regulation exists because we believe action must be taken on a prospective basis rather than a retrospective basis.  A good example is the building code.  If a building falls down and kills people, we could let the lawyers pursue litigation remedies and handle it that way, but it would be cold comfort for the people that died.  Letting the market solve it is not likely to work.  Instead we have a building code which is a tool to solve this problem before it becomes a problem.  Lawsuits create an incentive for good behavior, but it is not a perfect incentive.  When it comes to our desire to have structurally sound buildings, the compelling interest requires slightly more aggressive regulation.

Free marketers often claim that the market will solve all of our problems.  But markets are made up of people and they have the same infirmities that people have.  Markets don’t know everything that is going on.  If I go to a restaurant and have spoiled food, how does the market find out about it?  If the market doesn’t know about it, how can the market correct for the problem?  I will admit that if something ends up on the front page of the newspaper and the television set like the collapse of Enron, the market response is swift and certain.  My only point is that the market doesn’t know about everything because information does not transmit through the market with equal evenness and efficiency in every case.  Another example is the case of fraud.  My organization has dealt with people who have committed many frauds on elderly people, but the market didn’t fix it.  It took a lumbering, clumsy law enforcement establishment to take the fraudsters off the street.  But by the time law enforcement got there, a lot of people got hurt.

It is not the case that we don’t need business regulation.  What we need is smart, targeted regulation.  We need regulation that avoids micromanagement.  We need legislators that have some kind of theory of regulation and an understanding of when adults can be left to their own devices to protect themselves.  We need to avoid a nanny state that treats people like children.  We shouldn’t build our legal system entirely for the lowest common denominators.  But in the end, we need to recognize that sometimes business regulation is justified.

Lloyd Lim regulates health insurance in the State of Hawaii as the Health Branch Administrator of the Hawaii Insurance Division within the Department of Commerce and Consumer Affairs. He was previously the Executive Director and In House Counsel for the Hawaii Hurricane Relief Fund and a bond lawyer with the law firm of Brown & Wood. He has a B.A. from Columbia University, a J.D. from UCLA, and an M.B.A. from the University of Hawaii. He also holds the Chartered Property and Casualty Underwriter designation.