How the Jones Act is Causing Road Woes in New Jersey 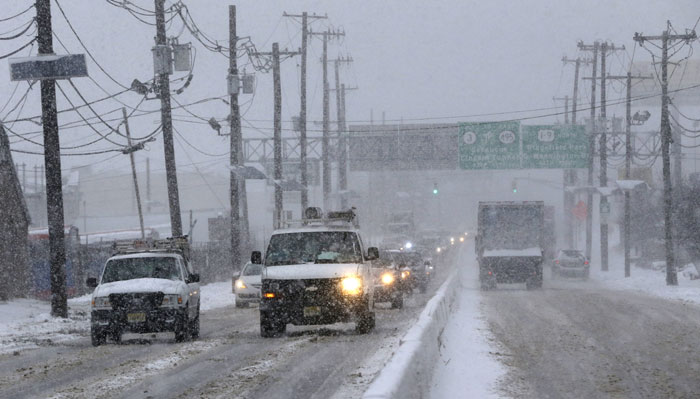 Talk to someone on the East Coast right now, and you’re likely to get an extra helping of jealousy over Hawaii’s beautiful weather. That’s because the last week has seen as much as a foot of snow in parts of New Jersey (and throughout the NorthEast and Mid-Atlantic). Road conditions are extremely hazardous in the Garden State–one report said that as of Feb. 13th, the New Jersey State Police had been called to 157 accidents and 353 additional calls for assistance from motorists throughout the state.

In such wintry, icy conditions, states depend heavily on road salt to keep their streets safe for drivers, but New Jersey’s salt supplies have been running low. An emergency supply of salt was ready to be shipped from Maine, when the shipment was held up by nothing other than the Jones Act–or, more specifically, the failure to get a Jones Act waiver from the Department of Homeland Security. Townsquare Media gives a great picture of the absurdity of the situation:

Jim Simpson, head of New Jersey’s Department of Transportation, would confirm only that the state’s salt supply is dangerously low and may only last through two more snowfalls, with one expected Saturday. He also confirmed that federal officials were asked for help concerning a 94-year-old law preventing foreign vessels from moving cargo from one U.S. port to another. Meanwhile, New Jersey has been unable to transport 40,000 tons of available road salt in Searsport, Maine in time to meet the urgent need here. Townsquare Media has learned federal help was actually refused, literally causing New Jersey’s road salt shipment to miss the boat. A foreign transport sitting ready to load in Searsport is now approaching Port Newark empty, because the Department of Homeland Security denied the state’s request for a waiver of the requirement for an American-flagged vessel. Simpson alluded to the situation in an exclusive interview with Eric Scott, aired on New Jersey 101.5 Friday morning but said he was hopeful the federal government would help. But Townsquare Media has learned that the state’s request to Homeland Security, which has granted such emergency waivers in the past, was turned down and New Jersey officials have spend the past week trying to get it reconsidered. The law in question is the 1920 Maritime Act, also known as the Jones Act, a measure originally enacted to protect the American shipping industry from foreign competition. In 2012, Gov. Andrew Cuomo of New York was able to get Homeland Security to waive the requirement in order to facilitate petroleum shipments to the Northeast during the gasoline shortage. In his interview on the Townsquare Radio Network Friday morning, Simpson said: “I’ve got a shipload of salt, 400 miles from here.” He added: “The only thing that we’ve been able to define as an American flag vessel would take us a month to get the salt here when I can have the salt here in a day and a half.” Further details obtained by Townsquare paint an even stranger picture. The longer, slower solution described by Simpson for getting the road salt from Maine to Port Newark would involve two barges that would not only take at least three weeks to make the trip but would also be able to carry only 10,000 tons each, leaving half the shipment still stuck in Maine. Worse yet, while New Jersey waited unsuccessfully for a federal waiver, at least one available transport ship, under a Marshall Islands flag, was docked in Searsport ready to accept all 40,000 tons. Instead, the “bulk carrier”, called the Anastasia S, is now en route to Port Newark empty.

According to CBS New York, Senators Cory Booker and Robert Menedez are working with federal authorities to find a solution to the situation. However, none of these have involved the efficiency of using a non-Jones Act ship to bring the entire shipment, but break it up into smaller shipments brought by various vessels on a much longer schedule. When we at Grassroot Institute talk about the damage caused by the Jones Act, we are usually focusing on its cost to Hawaii and our citizens. But the Jones Act is not just a Hawaii problem. From an oil spill clean-up in the Gulf of Mexico to keeping roads and drivers safe in New Jersey, the Jones Act has consistently shown itself to be an obstruction to safety … and common sense. We hope that as more people experience first-hand the absurdities of the Act, we will see more widespread support for reforming its harmful and outdated cabotage provisions.