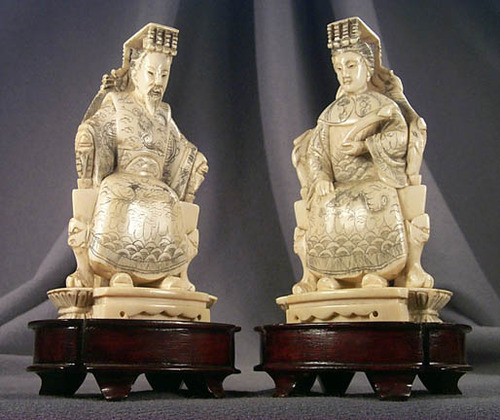 As I’ve written before, the Obama administration plans to effectively ban the sale of all ivory in America, even if purchased or inherited legally years ago. If you can’t prove its age, you can be arrested and have your property confiscated—unless you are well-connected and exempted.

Elephants are being killed for their ivory. Activists unable to protect the animals now are targeting Americans who followed the law in buying and selling legal old ivory objects.

But as I point out my latest piece in the American Spectator:

advocates of banning antique sales seem more interested in punishing people who bought and sold ivory legally because they bought and sold ivory, not because doing so would prevent poaching.  It is an exercise in moral vanity and political posturing, not practical conservation.

Nor do collectors of and dealers in antiques seek out poached ivory. Punishing people who followed the law and invested in legal objects might make a few extremists feel good, but won’t save a single elephant today.

Ivory entered America legally until 1989. Antiques with proper certification could be imported after that. But in mid-February the administration announced that if you had followed the law, it planned to render your collection or inventory essentially valueless.

The new guidance from the U.S. Fish and Wildlife Service indicated that most every auctioneer, collector, and dealer—and anyone else who has purchased or received something made of ivory—better hire a lawyer before selling their ivory possessions.

The prospective rules are biased against average folks. If you represent the non-profit cultural establishment, you’ll get around the rules.

Point one, no “commercial” imports even of antiques will be allowed. However, the rules apparently will exempt “museum and educational specimens.” According to the administration’s reasoning, non-profit institutions will have a unique right to continue driving elephants to extinction.

Point two, exports are banned, except antiques in what the government calls “exceptional circumstances.” But “certain noncommercial items” will be allowed, so people with friends in government likely will be able to hurdle any new burdens in a single bound. Everyone else better hire a lawyer or lobbyist.

Point three, only antiques, proved through “documented evidence” will be eligible for sale across state lines. How many antiques in America have “documented evidence” attesting to their age? At least a wealthy collector with a valuable item can try to find an expert and procure a CITES certificate. Of course, museum transfers likely won’t be considered commercial and non-profits may be able to engage in low-key extortion: “Donate it to us and we can ensure a generous appraisal to get you a substantial tax deduction.”

Point four, only documented old ivory, imported before 1990, can be sold even within a state. Say you acquired a bunch of ivory items over the years and retired in, say, Bozeman, Montana. Got notarized certificates for everything? See what you can get for your collection in Helena.

More likely, of course, you won’t have any documentation when items were brought to America. Then you can’t even take the objects—legally, at least—to a local flea market. Not that people would pay you more than a pittance there.

Ironically, the new policy will reduce genuine conservation efforts. The Fish and Wildlife Service will have to shift resources away from those linked to the killing of elephants and toward thousands of Americans who’s only mistake was to follow the law.

The administration should reverse course to focus on poaching. If not, Congress should block implementation and enforcement of the rules.  Punishing average Americans for lawful behavior isn’t fair to them—or helpful to elephants.

Doug Bandow is a Senior Fellow at the Cato Institute and an Advisor for the Grassroot Institute of Hawaii. Click here to find The Politics of Plunder and other books by Bandow on Amazon.