Crimea, Venice, Colorado Are Saying That The Era Of Big Government Is Over 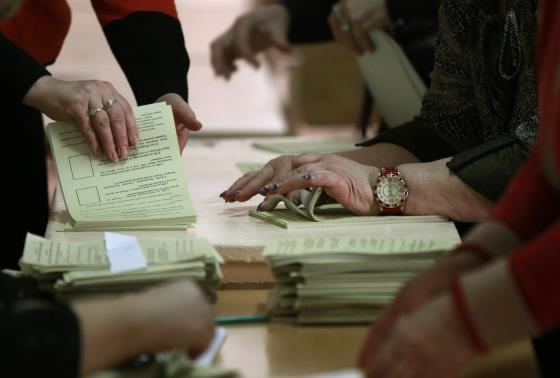 Crimea’s vote, a popular vote of no confidence in Kiev, to leave Ukraine (and rejoin Russia) is in some ways unique.

In other ways it appears part of an emerging, worldwide, trend.

Venice voted this week, in a non-binding referendum, to secede from Italy. 89% in favor: a popular vote of no confidence in Rome.

Scotland will vote next September on whether to disunite from the United Kingdom. Much to London’s dismay.

Parti Québécois is quite likely to take control of the Quebec legislature within a few weeks. PQ’s core mission, albeit currently soft pedaled, has been to establish Quebec as a sovereign nation. In 1995 it came within millimeters of winning a referendum to do just that..

Catalonia proposes a November 9 vote to separate from Spain. Madrid considers this illegal and has promised to quash the voting process. Yet the proposal is an indicator of public disaffection with Madrid.

In the United States, eleven Colorado counties recently narrowly voted down seceding to form a new state (a process requiring more Constitutional steps than were in evidence). The Washington Times, reporting on a somewhat comparable movement to break the governance of New York State into two autonomous regions, writes: “Campaigns for ‘secession’ or a 51st state have been on the rise since the 2012 presidential election — see California, Colorado and Maryland ….”

As “woman-on-the-street” Kristina Kristoforina from Rab Island off the Adriatic coast of Croatia expressed it well to this columnist (via Facebook):

It is because of overwhelming centralization of everything. We’ve seen that in the former Yugoslavia, and sadly enough the elites are repeating the same again so our regions are also in this trend (specially Istria). It seems like big politics is doomed to centralization. Seems regionalization is people’s way to send a message to the Big Heads. It is so easy to see it and yet someone has to write a long exquisite article on the subject so the the political elites can read it from a ‘reputable source.’ The elites forget to listen to the people. It’s the system’s fault. Too much power creates the fog around decision-makers’ heads.

This trend does not imply a wholesale redrawing of national borders as in the offing. It presents, rather, as a signal of popular dissatisfaction with remote capitals and big, inept, governments. It is a signal to national governments to dial it back … and get it right.

Yeats, in the aftermath of the Great War and during the uneasy interregnum that would lead to World War II, wrote in The Second Coming,

Turning and turning in the widening gyre
The falcon cannot hear the falconer;
Things fall apart; the centre cannot hold;
Mere anarchy is loosed upon the world,
The blood-dimmed tide is loosed, and everywhere
The ceremony of innocence is drowned….

A lament that “the center cannot hold” was redolent of a nostalgia for … empire. Four of the five empires governing 80% of humanity at the beginning of the Great War were gone or going soon. The British empire, the least autocratic, entered slow terminal decline. And, yes, the blood-dimmed tide was, then, loosed.

Today’s circumstances are different. “Things” are not “falling apart.”

People all over the world are rejecting being held by a “center.”

We, the people, yearn to dismantle the antiquated superstructure of central planning.

This trend appears to be the apotheosis of President Clinton’s 1996 State of the Uniondeclaration that “the era of big government is over….” Clinton softened his declaration with “but we cannot go back to the time when our citizens were left to fend for themselves. We must go forward as one America, one nation working together, to meet the challenges we face together. Self-reliance and teamwork are not opposing virtues — we must have both.”

Clinton’s qualification was a call to social solidarity. Not big government.

We are seeing a worldwide application of the great Tip O’Neill’s Law: “All politics is local.”

One of the central tenets of the Tea Party movement was, and remains: “The government has become too big and too powerful and many of those in Washington have grown out of touch with the citizens they represent.” The anarcho-anti-corporatist Occupy Wall Street declares “As one people, united, we acknowledge the reality: that the future of the human race requires the cooperation of its members; that our system must protect our rights, and upon corruption of that system, it is up to the individuals to protect their own rights, and those of their neighbors; that a democratic government derives its just power from the people….”

Times change. The iconic Cold War application of technology was the Space Race, a spectacular flexing of government muscle. It turned out that most of us did not wish to go so far out. Elton John brought it down to Earth in Rocketman: “Mars ain’t the kind of place to raise your kids/ In fact it’s cold as hell/ And there’s no one there to raise them if you did.”

The iconic technology of today isn’t governmental, it’s people-to-people, and powers ways of connecting: the Internet, the World Wide Web, and, especially, social media. People want the intimacy of interconnections rather than big, impersonal, institutions.

Another emerging sub-trend goes by “localtarian,” defined by the Urban Dictionary as someone “more likely to buy at a farmer’s market, stores that specialize in local products, or to buy foods produced by companies with local resources.”

Provided, of course, that the geopolitical reorganization we are undergoing does not undermine international cooperation — such as free trade — smaller, in its most literal fashion, government simply is better adapted to human nature. As Alexander Hamilton said in the debates of the Convention of the State of New York on the adoption of the federal Constitution:

There are certain social principles in human nature, from which we may draw the most solid conclusion with respect to the conduct of individuals and of, communities. We love our families more than our neighbors; we love our neighbors more than our countrymen in general. The human affections, like the solar heat, lose their intensity as they depart from the centre, and become languid in proportion to the expansion of the circle in which they act.

That expresses simple human nature. The great spiritual (and proto-libertarian) classic, the Tao Te Ching, in its penultimate chapter, beckons us to a radical form of this:

Small country, few people
Let them have many weapons but not use them
Let the people regard death seriously
And not migrate far away

Let the people return to tying knots and using them
Savor their food, admire their clothes
Content in their homes, happy in their customs

Neighboring countries see one another
Hear the sounds of roosters and dogs from one another
The people, until they grow old and die
Do not go back and forth with one another

“We love our families more than our neighbors.”

“The era of big government is over.”

The peoples of the world are proposing to dismantle big government superstructures as atavistic relics of a past, or fast fading, era. Relics of empire, perhaps. The peoples of the world are working at dismantling derelict systems of painfully obsolete central planning. The sentiments demonstrated by the Crimeans, and emerging from Venice, Scotland, Quebec, Catalonia, and Colorado are not, this time around, a manifestation of a “rough beast” slouching “toward Bethlehem to be born.”

Perhaps popular sentiment even will restore a rocking cradle alluded to by Yeats.

The trend looks more like green shoots of vital new growth piercing the decayed concrete of the warfare/welfare state. A century-long political winter — the long, slow, aftermath of the fall of the imperial order — appears, at long last, to be ending. And ending well.

Welcome, just possibly, to the dawn of a golden age.