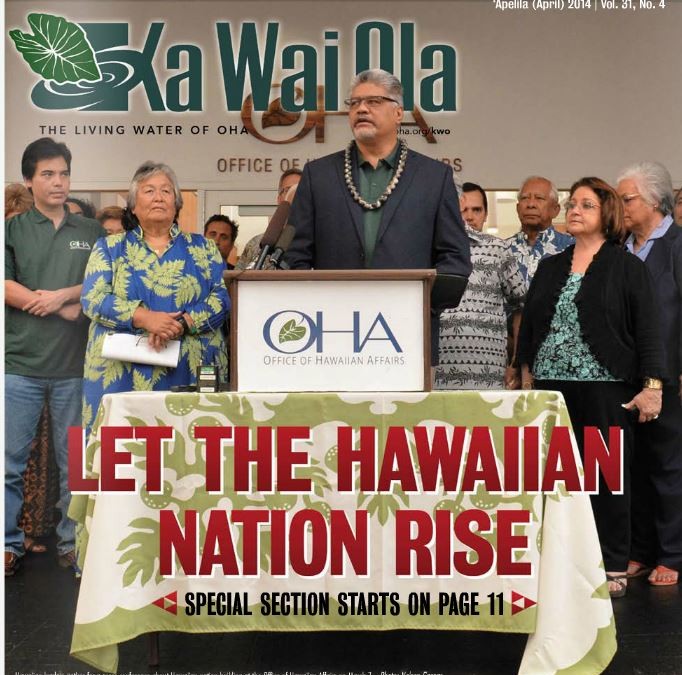 HONOLULU, Hawaii—May 10, 2014—The trustees of the Office of Hawaiian Affairs have embarrassed the State of Hawaii and must be held accountable for recent statements in a letter by its CEO to the U.S. Department of State questioning the legitimacy of American and Hawaii State sovereignty in the Hawaiian islands. The letter was ostensibly motivated by legal questions “..that stem from an illegal and prolonged occupation by the United States as a result of the illegal overthrow of the Hawaiian Kingdom government.” Although the trustees have rescinded the May 5th letter from OHA CEO Kamanao Crabbe to U.S. Secretary of State John Kerry, the board’s policy of pursuing the establishment of a sovereign government of Native Hawaiians may be consistent with the questioning of American and Hawaii State sovereignty. The Office of Hawaiian Affairs and the Native Hawaiian Roll Commission are on record for requiring applicants for the Native Hawaiian Roll to “…affirm the unrelinquished sovereignty of the Hawaiian people.” OHA’s own promotion of “Nation-building” efforts is premised upon the same historical arguments of Keanu Sai presented by Crabbe in the letter as grounds for questioning the legitimacy of the Hawaii State Government. Thus, while distancing themselves from the letter of its CEO, the trustees of the office of Hawaiian affairs have propagated policies that would naturally give rise to such a letter.

Keli’i Akina, Ph.D., president of the Grassroot Institute says: “How embarrassing and offensive that sitting government officials on the board of OHA should allow for the questioning of US and Hawaii state sovereignty in the Hawaiian Islands. We call upon the trustees of OHA to take responsibility themselves for giving rise to the confusion evident among the staff of OHA and throughout the community. We also call upon all voters in the State of Hawaii to exercise their right and duty to hold government agencies such as the Office of Hawaiian Affairs accountable as we go to the polls in 2014.”

The ultimate responsibility of OHA’s trustees for the views expressed in CEO Crabbe’s letter is evident upon close reading. Apparently, Crabbe does not consider his views to be personal but representative of the leaders of OHA and the leadership of the Native Hawaiian Roll Commission. He writes, “My executive staff, as public officials, carry out the policies and directives of the Trustees of the Office of Hawaiian Affairs.” He also cites a panel discussion and presentation at the University of Hawaii Richardson School of Law, involving John Waihee III, Chairman of the Roll Commission, as authoritative for the claims in his letter.

The letter from OHA CEO Kamanao Crabbe to U.S. Secretary of State John Kerry can be read in its entirety here.