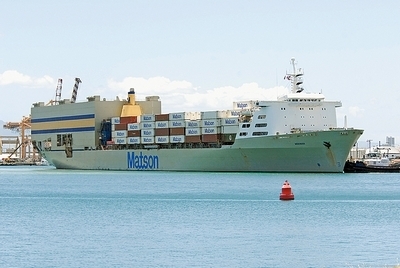 The Hawaii Republican Party meeting in convention on May 17, 2014, adopted eight platform resolutions including one calling for Jones Act reform that would exempt the noncontiguous trades – Alaska, Guam, Hawaii and Puerto Rico – from the domestic ship build requirement.

The Jones Act is a federal cabotage law enacted as Section 27 of the Merchant Marine Act of 1920 and requires a vessel be U.S. built, flag, owned, crewed and managed to transport cargo by water between two domestic points.

The resolution addresses the very high cost of major ship construction in the U.S. that contributes to high shipping costs and a lack of competition in the Hawaii trade.  It is now well recognized the cost of major shipbuilding in the United States is four to five times that of building comparable ships in Japan and South Korea.  Together with China, South Korea and Japan now construct more than 90% of the world’s self-propelled new ships over 1,000 gross tons each year.  The U.S. build requirement has created an artificial shortage of capital ships in domestic trades disproportionally penalizing the noncontiguous jurisdictions, which are completely dependent on ocean shipping for interstate surface transportation.

The party resolution follows from four companion resolutions were introduced in the Hawaii State Legislature during its 2014 session. The resolutions called on the Hawaii Congressional Delegation to introduce and Congress to enact federal legislation that would exempt the noncontiguous trades from the domestic build requirement of the Jones Act.   Two of resolutions (SR 45, SCR 93) were introduced by State Senator Sam Slom (R) and the other two (HR 113, HCR 153) by State Representative Gene Ward (R) with six Democratic House members including the Speaker Joseph Souki .

To reach out to the other noncontiguous jurisdictions, three Hawaii State Legislators held a bipartisan press conference at the Hawaii State Capitol on March 13, 2014, with participation of legislators from Alaska, Guam and Puerto Rico, demonstrating widespread support for Jones Act reform.  A month later on April 15th, the Legislature of Guam adopted a resolution calling on their Congresswoman Madeleine Z Bordallo to introduce federal legislation to exempt the noncontiguous trades from the U.S. build requirement.  The Senate of Puerto Rico is readying a report due out shortly covering the extensive hearings held earlier this year (Jan. 27th – Feb. 10th) to learn the impact of the Jones Act on the Commonwealth.

Further buttressing these legislative initiatives, the Governor’s Hawaii Refinery Task Force released their Final Report on April 28th recommending that the State pursue a Jones Act exemption to lower the cost of energy in Hawaii.  And, the Congressional Research Service issued on May 5th a report on the rail transportation of crude oil, which among other things detailed the adverse impact of the domestic build requirement of the Jones Act on U.S. energy markets.

Former Congresswoman, gubernatorial candidate and current Chairwoman of the Hawaii Republican Party, Patricia Saiki, said in response to the adoption of a party resolution calling for Jones Act reform: “Many in politics have expressed their concern over the high cost of living here in Hawaii.  Being the most expensive state in which to live, with goods and services including food costs higher than any other state in the nation, is of real concern to our people.  But few in power today have done much to alleviate this situation.  Getting an exemption from the Jones Act, as expressed in the Resolution recently passed by our Republican Party is one of the ways by which we can effectively change things for the better.  Our Party is committed to finding such solutions to a serious problem and we seek support for our candidates to lead the way.”

Former Hawaii State Lt. Governor and 2014 Republican gubernatorial candidate, James “Duke” Aiona, stated in respect of his prospective role as governor, “The Jones act is a federal regulation that affects all the people of Hawaii. It is time for all stakeholders to come together and resolve this issue in a manner that is in the best interests of our state.  I am encouraged and excited by the Hawaii Shipping Council’s recent proposal and the Republican Party’s resolution relating to the Jones Act.  I look forward to providing the leadership needed for this resolution.”

U.S. Senatorial candidate Campbell “Cam” Cavasso (R), who will face the winner of the Democratic primary (either U.S. Senator Brian Schatz or U.S. Representative Colleen Hanabusa) in November, said, “It is time for our Hawaii to free our people from the bonds of federal regulations which artificially increase the cost of living for every family by multiplied thousands of dollars. It is time to set our people free from extreme, external regulations costing every man, woman, and child in Hawaii.  We can do this now.”

Hawaii State Representative Gene Ward (R), minority leader emeritus, and introducer of Jones Act resolutions in 2013 and 2014, said,  “As the cost to feed ourselves escalates and we continue to import over 80% of everything we consume, the most sustainable approach to food security in Hawaii is lowering the cost of living by lowering the cost of shipping. We know we can cut the grocery bills of Hawaii’s struggling families through a minor exemption to the Jones Act-but we have not acted. Now is the time to press for real food security and sustainability by using all the ships in the world to come to our shores, not just a select expensive few under the Jones Act. If only a fraction of the people understood the Jones Act and how it punishes us, Hawaii would be quick to act for an exemption as we have done with Obama Care to protect our Pre-Paid Healthcare in Hawaii. National security will not be effected and in their hearts, the naysayers know this is true.”

Hawaii State Senator Sam Slom (R), minority leader and introducer of a Jones Act reform resolution in 2014, said, “Thanks to the work of the Hawaii Shippers Council and others, I feel after 20 years of activity, the public has a better understanding of the cost impact of the Jones Act and our options. We welcome support from the Hawaii Republican Party but reiterate this reform is a non-partisan issue that negatively affects all residents of Hawaii. We welcome future support from political, social and business organizations. We can win this issue.”

Michael Hansen is President of the Hawaii Shippers Council and an Advisor to the Grassroot Institute.