Senator Slom calls out the Governor on the Jones Act 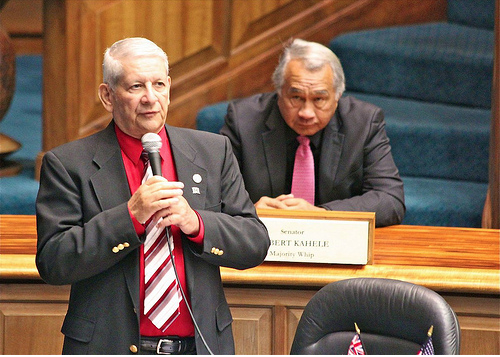 A note from the Grassroot Institute: For years, Senator Sam Slom has been part of the small, but vocal group pushing for Jones Act reform. Along with groups like the Hawaii Shippers Council and the Grassroot Institute, Sen. Slom has pointed out the economic costs of the Jones Act in Hawaii and has been a critical in keeping the issue alive. Now, we are finally seeing a consensus build as to the dire need for Jones Act reform. After a bipartisan effort in the legislature to introduce a resolution endorsing a limited exemption, more and more policy makers are seeing the need for change. Now, with the Governor’s own task force recommending the state seek a Jones Act exemption, the usual excuses and arguments against supporting action on the Jones Act seem even more hollow. Thus, the Grassroot Institute is eager to see the Governor’s response to Sen. Slom’s demand that the state stand up for the interest of its citizens and that the Governor use his influence in Washington to support Jones Act reform.

Honolulu – May 8, 2014 — Today, Senator Sam Slom called for the governor to seek an exemption to the Jones Act ship build requirement.  Senator Slom says “The Governor should follow the recommendations of his committee and should immediately seek an exemption from the Jones Act, particularly the ship build requirement. The Jones Act ship-build requirement is the main contributor to the high cost of living in Hawaii.  Hawaiian residents are paying 68% more for food than mainlanders. I want to know, and I am sure the people of Hawaii want to know, when the Governor is going to ask for a Jones Act exemption for Hawaii?”

Senator Slom’s comments address the news today that Matson shipping will be increasing the cost of fuel surcharges from 39.5% to 42.5%.[i] The Governor’s own task force, the Hawaii Refinery Task Force (HRTF), proposed the state seek relief from the Jones Act ship build requirement in its final report published by DBEBT on April 9, 2014, and released April 28, 2014.  Senator Slom wants to know “What the Governor plans are for seeking a Jones Act exemption and what is his timeline for relief to our state taxpayers?”

Senator Sam Slom has been a vocal opponent of the Jones Act ship build requirement and most recently, joined a multi-jurisdictional movement for a Jones Act exemption with Alaska and Puerto Rico.  Senator Slom notes that Guam passed a resolution on April 15, 2014, also seeking relief from the effect of the Jones Act.  Slom wonders why the governor has not already placed a plan for Jones Act U.S. ship build requirement relief into motion, “Our governor can contact the White House, federal senators and congressmen if he chooses to, in order to petition for an exemption.  It is a simple matter of writing a letter or two, and making some phone calls.  Hawaii needs relief from the Jones Act now.” Recommendations made by a governor appointed HRTF support Slom’s position that Hawaii will benefit from a Jones Act exemption.

The Hawaii Shippers Council president (Michael Hansen) also summarized DBEDT’s press release and the Governor’s response to the HRTF Final Report[ii]: “Hawaii Governor Neil Abercrombie (D) established the 30-member Task Force by Executive Order No. 13-19 dated February 19, 2013 to identify the challenges and risks if one or both refineries in the State were permanently closed.  The Task Force was attached to the DBEDT’sHawaii State Energy Office for administrative purposes and two private sector consultants – ICF International and Poten & Partners Inc. – were contracted to provide technical support and compile the Task Force report. Governor Abercrombie endorsed the Task Force’s Final Report in the official press release announcing its public availability, “This final report validates the importance of a sustained and reliable energy supply for the people of Hawaii.””

Senator Slom responded to the Governor’s HRTF endorsement saying, “What we need now are real solutions, with real economic impacts, that relieve our local residents from the escalating prices they pay as a consequence of the Jones Act.“