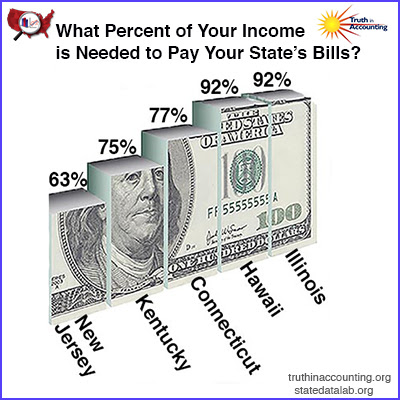 HONOLULU, Hawaii—July 14, 2014—Hawaii’s mounting state debt now represents $41,300 per taxpayer, the second highest in the country. This, according to Truth in Accounting’s State Data Lab, which calculates the Per Taxpayer Burden (the debt remaining after all assets are tapped) for all 50 states.

The continued growth of the state’s debt has caused some to ponder the viability of current spending practices and state benefits.

“Hawaii’s Taxpayer Burden is one of the 5 highest across the 50 states, and has increased every year since 2009.  Most of Hawaii’s debt is unfunded retiree pension and healthcare benefits, left for tomorrow’s taxpayers who may not receive services today’s taxpayers should have fully paid for,” stated Donna Rook, President of StateDataLab.org.

“It is time to face some hard truths when it comes to government spending,” stated Keli’i Akina, Ph.D., President of the Grassroot Institute of Hawaii. “Hawaii’s unfunded liabilities threaten to sink our future. We cannot pass such a burden on to the next generation, but must make the hard decisions that will ensure the fiscal health of our state for decades to come. I urge our state’s policymakers to put aside partisanship and embrace a ‘best practices’ plan of action that reduces our state debt.”