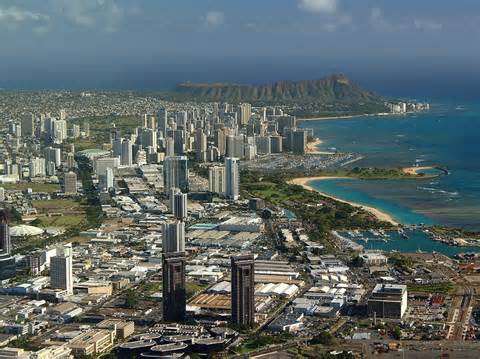 The recession and recovery have brought turmoil and strife to cities like Detroit, but many cities have not suffered nearly as much. Cities experience economic turmoil in differing ways and luckily Honolulu has retained a relatively strong economy. Based on government spending, property development, and tourism, Honolulu performed better through the recession than most other major American cities. Unfortunately, Honolulu’s recovery was not as impressive.

To help evaluate shifting city economies in recent years, the Brookings Institute recently released the 2014 edition of the Metro Monitor, a report that tracks relative change in economic indicators for the 100 largest metropolitan areas in the US during the recession and recovery.

Florida and California cities’ performance support these points. Both states’ cities performed poorly in the recession, the best ranking between the two being 71st of 100. Then during the recovery, these cities were able to regain much of the lost growth, propelling all but one city into the top 50% of Brookings’s rankings with the most dramatic jump coming from Cape Coral-Fort Myers, FL, which went from 100th to 5th highest out of 100. Looking at the Brookings maps of the recession versus the recovery reveals this pattern across the country: good recession, bad recovery or bad recession, good recovery.

Part of the reason Honolulu and Hawaii in general retain such good employment is that the state has the 3rd highest percentage of the labor force working in the government of US states. Even in the face of lower tax revenues, governments will run up debts to stimulate the economy. While temporarily beneficial in supplying jobs, continued overspending is costly to the state in the long run as its debts increase.  According to State Budget Solutions, (2) Hawaii has the second highest state debt per capita at $33,111 and the highest debt as a proportion of GDP at 64%.

Unfortunately, factors like a high cost of living (3) and a poor government climate for businesses (4) mitigate the advance of Honolulu’s economy, thereby limiting its potential for the kind of economic growth needed to climb out of the debt hole Hawaii has dug for itself.