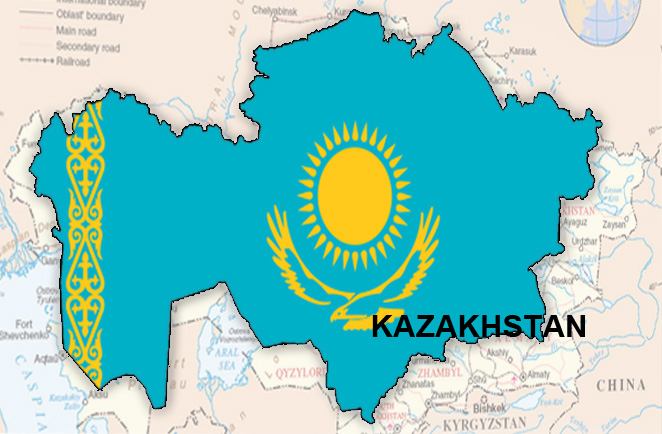 A note from the Grassroot Institute: We are lucky and privileged to have a respected international scholar and advocate of the free market on our Board of Advisors. Professor Ken Schoolland continues to travel around the world, sharing his work and bringing the ideals of liberty into every corner of the globe. His trip reports have become an opportunity to study any number of larger economic issues (property rights, banking, entrepreneurship) in a different light.  Here, he reports on a recent trip to Kazakhstan.

I’ve traveled a lot, but never to such an exotic destination as Kazakhstan. The country and the people are a mix of everything Asia—Russian, Mongolian, Turkish, Indian, modern, prosperous, intellectual, traditional, proud, friendly, and aware. I landed on the vast steppes of Astana, the amazingly glamorous new capitol fueled by vast new oil riches of the Caspian Sea. And departed from Almaty, the old capitol nestled at the foot of spectacular snow-capped peaks that skirt the ancient Silk Road.

Through the auspices of Pavel Kotyshev, Executive Director of the Institute for Development and Economic Affairs (IDEA), and the Entrepreneurship Development Fund (DAMU), I was fortunate to have been invited to join 10,000 other participants at the Astana Economic Forum & the UN World Anti-Crisis Conference. It was truly a gala affair. For all their extraordinary hospitality, I am very grateful.

If you are looking for a man of action to promote entrepreneurship and the ideals of liberty in Central Asia, Pavel is the star. Pavel is efficient and capable, he is a superior intellect, and he is good friends with everyone. At every turn, there were people and projects familiar to him.

Why such global events in Central Asia? I think the preeminent purpose was to showcase the strategic prominence of Kazakh oil and the leadership of President (for life), Nursultan Nazarbayev (above left). On a tour of a local park I found this quote from the national constitution: “The Republic of Kazakhstan proclaims itself a democratic, secular, legal and social state whose highest values are an individual, his life, rights and freedoms.” This was surely music to a libertarian’s ears. Yet, one could wonder if this was a reference in practice to the natural rights of all—or to one individual in particular.

Of course the conference brought ideas and contacts together from all over the globe. To my ears, the most fascinating words came from Muhammad Yunus, Nobel Peace Laureate for his creation of the Grameen Bank in Bangladesh. I’ve recounted his story to all my students of international economics, but it came alive at this forum.

Yunus noticed that banks ignored the poor in his village and only seemed interested in lending to prosperous, secure companies and the wealthy in cities. This left the village loan sharks to prey upon the desperate poor. But even they would not lend to women. He broke the pattern by starting off with a total loan of micro, or nano, credit totaling $27 to 42 people.

To his surprise, it transformed their lives in demonstrating that someone would trust them with such a tremendous amount of money. Much has been reported of Grameen bank representatives going to the villages and eventually making loans almost exclusively to women who were far more likely to use the money with wisdom and frugality in building enterprise to benefit their families.

Borrowers became a community of mutual support for education, good lifestyle, and encouragement that resulted in a 99% repayment rate. The bank now serves 8.5 million borrowers who are also depositors and owners of the Grameen Bank. Yunus advises people around the world on similar start-ups, including micro banks in France, Norway, and across the U.S.

What wasn’t explained was the role that government licensing and bank regulations play in eliminating the natural impulse to competition in finance. Surely the favored banks in Bangladesh had less motivation to assist the poor so long as they enjoyed protection of an exclusive market.

But Yunus did poke fun at the leading banks of the industrial world. It was always argued that the poor were not creditworthy and wouldn’t repay their debts. Now, after the financial crisis of 2008 and 2009, it is clear, says Yunus, that the largest of banks and financial institutions were the ones who were not creditworthy and would not repay their debts.

As powerful as these banks were, governments of the world ran to the rescue and bailed them out with taxpayer funds. There was so much talk of “the banking crisis,” while remaining silent about “the energy crisis” and “the food crisis” that existed at the same time. “Is it right that the banks say people are not creditworthy?” asked Yunus. “This should be turned around to say the banks are not people worthy!”

Another observation that was quite astute concerned the perpetual complaint about the problems of high unemployment. “Can you imagine and the beginning of time some Stone Age man sitting in a cave and filling out an application for a job…saying no one wants to hire me for a job? No!” said Yunus. “From the beginning of time people were thinking of how to solve problems, not how to get a job. Thinking of solving problems first creates jobs.” He went on to explain that young people shouldn’t be thinking of getting a job, but instead should be thinking of solving problems by starting businesses that create jobs as long term, self-sustaining enterprises, not just one time charities.

His last remark concerned patents and copyrights. He didn’t challenge the system of patents and copyrights, but observed that while companies hold thousands of patents, they may only be using the very latest ones. The rest, said Yunus, were languishing without benefit to anyone. “Why not pool these unused patents and let anyone use them? Of course they might still require permission, but at least they would be opened for use in poorer countries.”

Funds from the International Society for Individual Liberty (ISIL) supported the making of CD’s for the children’s musical production of stories from The Adventures of Jonathan Gullible (JG). Thus, Lyudmila Людмила Мельникова (top center) and Pavel Koktyshev (top left) have accomplished a magnificent success in Kazakhstan.

Pavel was instrumental in bringing the book to Kazakhstan and to Lyudmila who became fascinated with the concept. I met Pavel at the Asia Centre for Enterprise (ACE) conference in New Delhi in 2013. He wrote that he was impressed by the book and wanted to translate it into Kazakh. With his friends, Aigerim Kassimova and Dauren Kaysarov, he translated “The Philosophy of Liberty (PoL)” animation into Kazakh. The PoL is from the epilogue of the JG book.

Pavel tried crowdsourcing to raise funds for publishing several books, including Hayek’s Road to Serfdom, but this has not yet led to success. Translations of many different styles were not always good. Then he crossed paths with his long time friend, Lyudmila, and thought of doing something creative. Lyudmila is a dynamic music teacher at the No. 1 School of Karaganda. She and Pavel are both extraordinary singers who have performed together for years.

Lyudmila was new to these economics ideas, but became excited when reading a Russian edition of the book on the internet, provided by Alex Kouryaev. She composed lyrics for the scripts and music for the instrumentals. Eventually she plans versions in Russian, Kazakh, and English.

Lyudmila has directed the production of two chapters as a cartoon on television, two chapters as puppet theater for television, and four chapters for a theatrical cast of up to 25 children on stage. I have never known anyone with such energy and vision. Lyudmila is like the magical fairy who makes children’s dreams come true.

“Children  like it,” says Lyudmila. “It is done with lively audience interaction. We can ask questions of the audience and the children respond. It is a good way to learn lessons of economy between players and the audience. Kids are excited to have more plays and they always want new materials. And teachers like it, too. They are not so strict by ideology.”

Along with the internet distribution, Lyudmila traveled to Moscow to make CD’s of the production that are going to schools throughout the member countries of the Commonwealth of Independent States (CIS): Armenia, Azerbaijan, Belarus, Kazakhstan, Kyrgyzstan, Moldova, Russia, Tajikistan, and Uzbekistan. Pavel arranged a press conference for the release of the CD at the Astana Economic Forum and UN World Anti-Crisis Conference.

In August, Lyudmila will be presenting the play in Finland at “The Magic World of Theater,” a music festival competition of European theater for youth. Fifteen students will be accompanied by their parents at their own expense. The play has already been performed in numerous schools and on television in cities of Kazakhstan and recently I enjoyed a special performance at Kenesary St. School, School #31 in Astana.

At this conference, I presented evidence that migration is an excellent selection process for wealth creating entrepreneurial talent. Not only do 1st generation immigrants start businesses at twice the rate of native American citizens and 2nd generation immigrants, but they also contribute mightily to their home countries with remittances that are three times greater than official overseas development assistance—and far more constructive.

Remittances are from people who earned their own money and give it to people they know. This is much more effective than faceless bureaucrats taking tax money from people they don’t know and giving it as aid to people they also don’t know. My talk was limited to 10 minutes at the Astana Economic Forum, but Pavel arranged for me to expand on this in an hour presentation the next day at the Institute for Public Policy. (Did you ever notice how much more bright and colorful women are than men?)

Pavel and Lyudmila, two of the finest and most accomplished people I know, have shown me around Astana. On the first day of my stay, we visited a monument which memorializes a third of the Kazakh population that perished under Stalin’s collectivization famine in the 1930’s.

It is a stark reminder of reasons to remain diligent to the cause of advancing liberty everywhere. Indeed, these are two people who are at the forefront of making sure of a future for liberty in Asia.

Ken Schoolland is Associate Professor of Economics and Director of the Entrepreneurship Center at Hawaii Pacific University, President of the International Society for Individual Liberty, and a member of the Board of Scholars at the Grassroot Institute of Hawaii