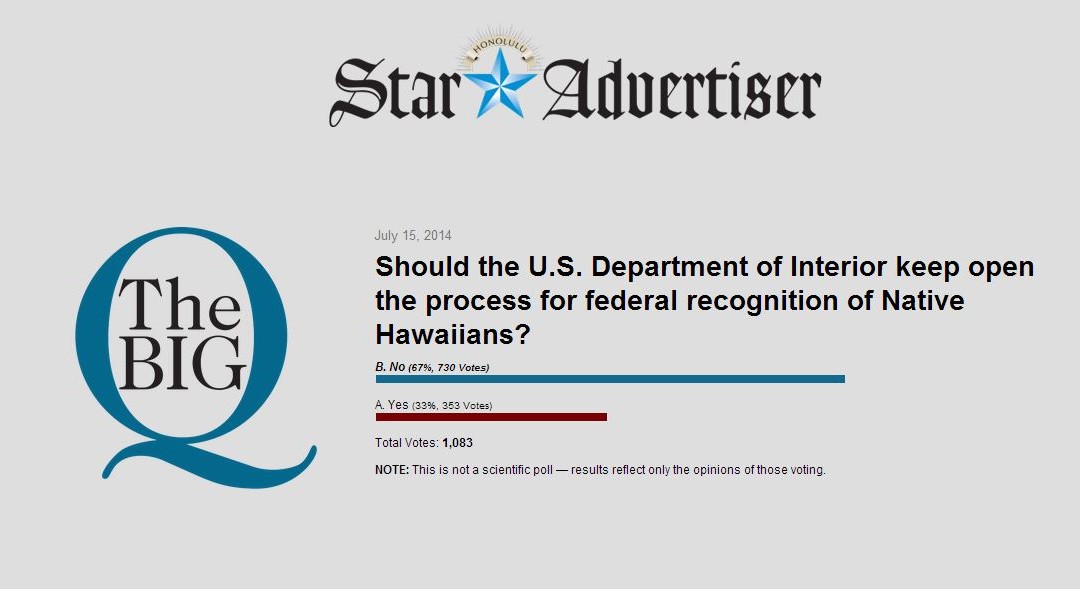 HONOLULU, Hawaii—July 16, 2014—A new online poll by the Honolulu Star-Advertiser confirms that despite continued support from the Office of Hawaiian Affairs, a significant majority are opposed to the federal government’s involvement in the creation of a Native Hawaiian government.

The poll, which appeared on the Star-Advertiser website as a daily poll question for July 15, 2014, asked, “Should the U.S. Department of Interior keep open the process for federal recognition of Native Hawaiians?” An overwhelming 67% of those responding voted “No,” while only 33% supported the continuation of the DOI’s efforts.

In light of the strong opposition voiced at the recent DOI hearings, these results were not a surprise. Support for the nation-building process has waned over the years, but the recent efforts from the Office of Hawaiian Affairs and the federal response from the Department of the Interior have met with increasing criticism. Many Hawaiian citizens are concerned to see the nation-building process pursued so vigorously despite the many questions that have been raised about it.

“The people of Hawaii have put up a giant flashing ‘Stop’ sign for OHA and the federal government to see” stated Keli’i Akina, Ph.D., President of the Grassroot Institute of Hawaii. “In every possible venue they are expressing opposition to the state’s race-based nation-building program.   The question shouldn’t be whether the people support a Native Hawaiian government. The question should be whether the State will finally listen to the voice of the people and abandon this wasteful and divisive effort.”

“After the expenditure of millions of dollars and considerable influence, the Office of Hawaiian Affairs has still failed to convince the People of the merit of its nation-building effort,” continued Dr. Akina. “How much more will they throw away on this process? These resources could be better spent helping the people of Hawaii in real and substantial ways such as improving educational achievement or job training. Let us hope that OHA finally hears what the citizens of Hawaii have been trying so hard to tell them–it’s time to get out of the nation-building business.”