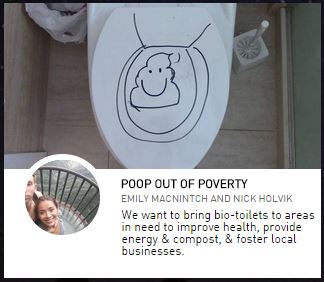 Note from Grassroot: We are so proud to see Nick and Emily’s efforts to apply creative free market thinking to solving the world’s problems. We urge you to visit the National Geographic Expedition Granted contest, watch their video, and vote.

If you have ever been to India, I’m sure you’ve smelled a problem. Many of the people openly defecate, which contaminates groundwater, crops, and drinking water. This spreads disease and kills millions worldwide. Most of these deaths are completely preventable. The World Health Organization and UNICEF estimate that in some villages, 65% of the people openly defecate, and the country has about a 50% open defecation rate as a whole. The situation gets worse when we look at women, who are often kidnapped, or become victims of sexual assault as they have to venture off alone to simply use the bathroom. Once adequate sanitation is provided, school attendance goes up, especially for women.

Newly-elected Prime Minister Narendra Modi thinks he has a solution to the problem. Modi wants to tackle the problem with government money. Modi is giving 15,000 rupees to each home without a toilet, for the purpose of building a toilet.

Will this solution work?

Well, according to Soutik Biswas of BBC News, many Indians don’t use toilets because it’s part of their culture.  Another report in the Economist showed that fixing dreadful sanitation in India requires not just building toilets, but also changing habits.

Princeton economist Diane Coffey found that even among households with a working latrine, more than 40% reported at least one member of the family still defecating in the open. The study showed that if the toilet was government built, they were even more likely to defecate in the open instead of using a toilet.

Government cannot solve this problem; we need the free-market to do so! Entrepreneurs need to find another way to provide incentive to the people of India to use toilets.

Emily MacNintch and I have an idea. We want to bring bio-digesting toilets to India that turn human waste into energy and compost!  We want to provide incentive for people to use the toilets.  We want to teach communities to use these in order to create a product to sell: energy and compost. This will create jobs, lower disease, and improve agriculture and the environment.

We came up with this idea through a random chain of events, that I’m sure most entrepreneurs also go through before their “aha” moment. Emily had used these toilets in Costa Rica at a sustainable ranch, which was part of a course during her undergraduate studies. She had told me about them, and how she felt it was a brilliant idea. While we were both at the Shanghai Austrian Economics Summit, I attended a talk by June Arunga. June had mentioned that in Sub Saharan Africa and India, there is a need for entrepreneurs to provide a solution to their sanitation problem, but there is a catch: it must be done without the need for traditional infrastructure (running water and sewage). I immediately thought of Emily, and we went to work at creating a plan.

These toilets capture the high methane content in human waste, and store them which can be used for energy.  Methane is highly flammable, and an attractive source for fuel.  If feces and urine are collected separately, and sanitized, they can be used for organic fertilizer as well.

These systems have been built for as little as 5000 rupees, one third of the amount Modi is giving to homes.

There have been successful launches of similar ideas. One, by LooWatt (backed by Bill and Melinda Gates foundation), operates in Madagascar.

We think these toilets will be different from traditional latrines.  The reason is because of the incentives it presents to the communities.

Surely, the people of India will use toilets if they get money from doing so! If a business owner runs a communal toilet in a village, he or she will spread awareness on how dangerous open defecation is, maintain the toilets, promote its use, and provide a service the people need, in order to increase his profits. If no one uses the toilet, he makes no money. The market will put pressure on the people to change their views.

Help us show how the free-market solves problems.  Please consider voting for our idea, which could win the National Geographic prize to help us pursue our goal: http://expeditiongranted.nationalgeographic.com/project/poop-out-of-poverty/.