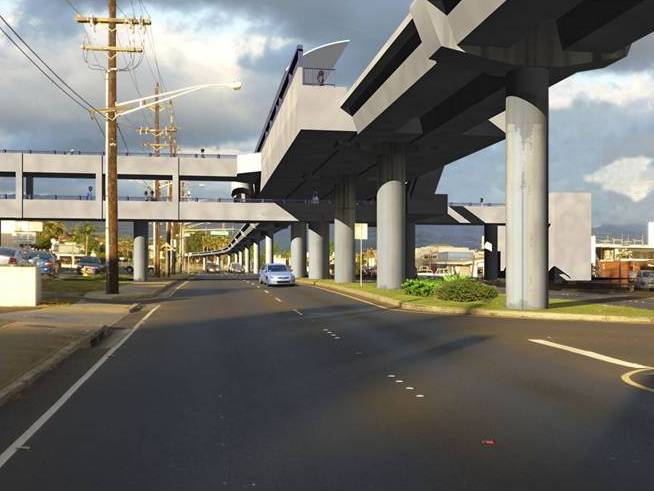 The city and county of Honolulu approved construction of a rail transit system in 2005 under the direction of the Honolulu Authority for Rapid Transportation (HART). Stretching 20 miles from East Kapolei to Ala Moana, this $5.26 billion rail line is projected to partially open in 2017 and be completed in 2019. But cost overruns created by an artificially compressed construction schedule are eating away at the financing. If HART does not act to rein in contract spending, moves to extend the GE Tax surcharge could lead to another rail showdown.

Passed by legislators in 2005, the 0.5% General Excise Tax surcharge was to aid only in construction costs, but recently some politicians have been intimating at an extension to the GET surcharge. Mayor Caldwell suggests continuing the GE tax “in perpetuity” to support operating costs.

The present rail surcharge will expire on December 31, 2022—two gubernatorial terms from today.

Public approval of the rail project is waning. In one poll performed by Civil Beat in October 2013, only 35% of residents supported the Honolulu Rail project, down from 43% in 2012 and 50.6% in the 2008 general election.

At the recent Grassroot Institute candidates’ forum, Republican gubernatorial candidate Duke Aiona said that “if they’re going to present any proposals as far as extending that financing, they will meet opposition from the 5th floor when I’m governor.”

Randal O’Toole in a recent Cato Institute analysis, explained: “Honolulu is building a 20-mile elevated rail line that costs well over twice as much as the average light rail. Yet those lines will be limited to little (or no) more than light-rail capacities.”

In addition, the increase in local jobs has been paltry compared to the grandiose initial estimate of 17,000 jobs. Based on numbers from a recent HART news release, only about 743 local jobs have been created by the rail project thus far. One could reasonably expect the new peak estimate of 4,000 jobs to be lowered again as the project continues.

With budget problems mounting and public doubt growing, the rail project could face a fiscal showdown before it ever goes into commission.

A practical evaluation of the rail project’s schedule with an eye to reducing contract costs by extending artificially short construction deadlines seems wise at this junction. By their own admission, HART executives underestimated the effect of litigation on construction costs and schedules. Will they now underestimate their ability to push through an unpopular tax hike?

It would be better to commence partial operation in 2018 than to make permanent the temporary 0.5% GE Tax surcharge.