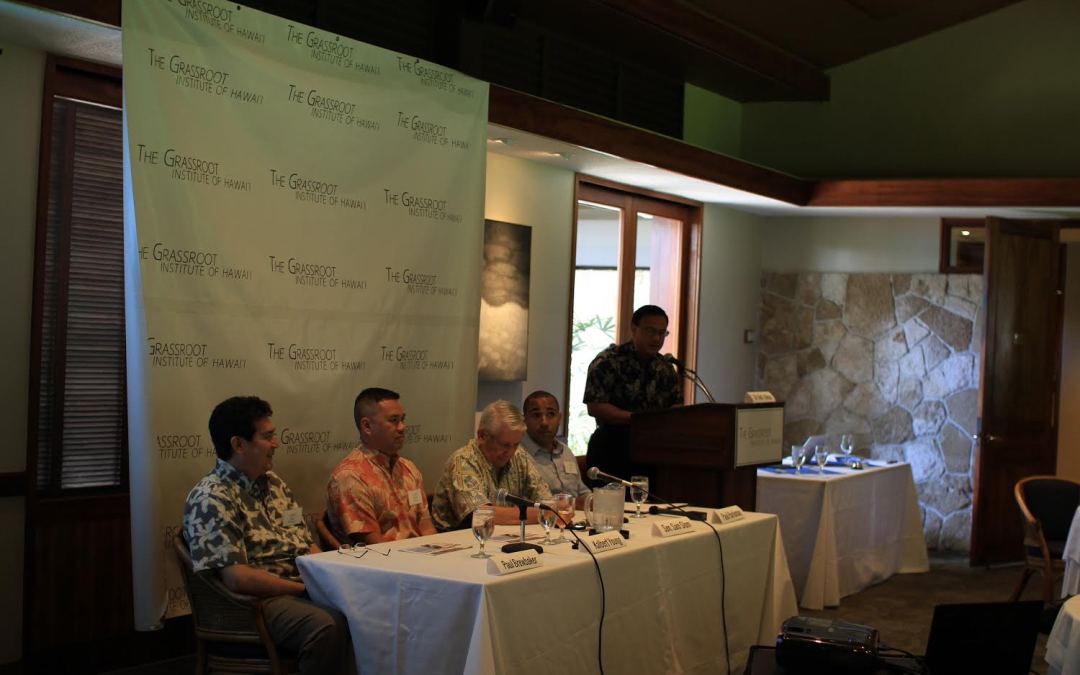 HONOLULU, HAWAII–Oct. 24, 2014–The state’s finances are a matter of controversy, the critical substance of which is often obscured by politics. In an effort to cut through the clutter and promote honest, unflinching discourse on Hawaii’s budget, the Grassroot Institute of Hawaii featured an expert panel to explore the issue. The highlights from this groundbreaking event will be broadcast for the first time this Sunday on OC16 at 10:30pm. The program will air courtesy of ThinkTech Hawaii, which partnered with the Grassroot Institute in hosting the event.

The panel, which featured former Bank of Hawaii Chief Economist Paul Brewbaker, State Budget Director Kalbert Young, Senator Sam Slom, and Senate Minority Research Office Budget Director Paul Harleman, included a wide variety of views on the state’s fiscal health and the measures needed to stave off a possible bust in the coming years. While Mr. Harleman predicted that only tax increases and spending cuts could correct the current problems, Mr. Young was optimistic about the ability of state policy makers to respond appropriately and bullish on the future of Hawaii’s economy in general.

Despite the variety of perspectives on display, there were important points of agreement among the participants. Most notable was the consensus that one of the most critical issues to be addressed is the state’s unfunded liabilities. Though it may require political courage to take on the problem, it is clear that experts agree that it is necessary for the future fiscal health of our state.

“As an independent think-tank, Grassroot Institute is pleased to feature a diverse and representative panel of experts who have agreed that our state government’s financial health is at serious risk,” stated Keli’i Akina, Ph.D., President of the Grassroot Institute. “Regardless of one’s political views, we need to take a realistic look at government spending and its long-term impact in order to move forward with the best solutions for everyone in Hawaii.”