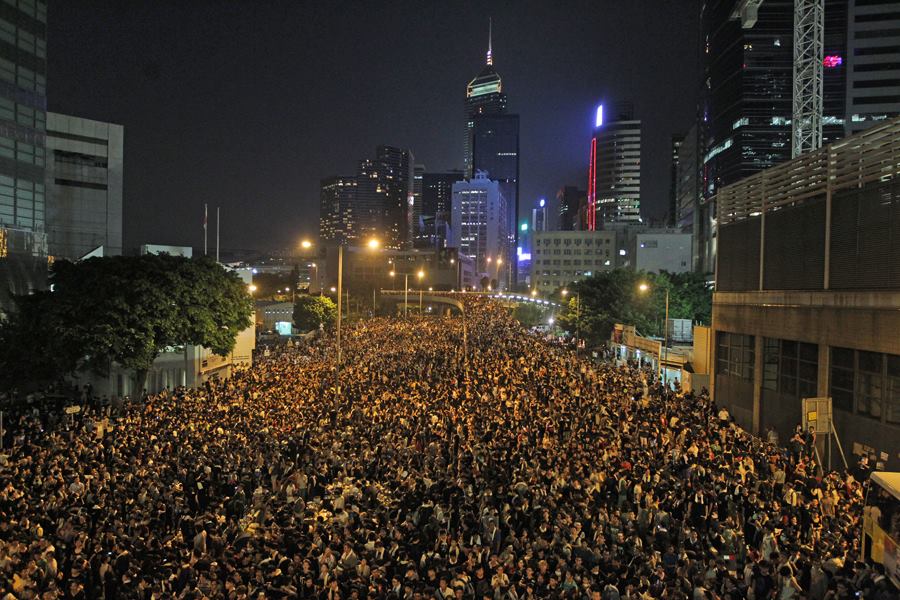 Hong Kong is part of China.  But administered separately from the rest of the People’s Republic of China, the territory respects civil liberties while hosting the world’s freest economy.

Demonstrators are pressing Beijing to make good on its promise of  democratic rule and free elections.  But the PRC will not, indeed, cannot, give residents of Hong Kong what it refuses to give the rest of its citizens.  The city’s future depends on finding a compromise that preserves Hong Kong’s freedom and peace.

The British colony grew out of imperial China’s weakness.  London seized Hong Kong Island, then the Kowloon Peninsula, and later “leased” the New Territories.  In 1997 the latter’s 99-year term ran out.  At which point Beijing was legally entitled to take back the New Territories.

Dividing Hong Kong would have been a practical nightmare.  And Beijing might not have continued to honor territorial cessions forced more than a century before.  So in 1984 London agreed to the full territory’s return.

One wonders:  What if Prime Minister Margaret Thatcher had scheduled a referendum in which the territory’s residents could freely express their decision?

At the time a still weak and isolated Beijing probably would have felt little choice but to accept an adverse vote.  However, the PRC might have chosen to bide its time, as it has done with Taiwan, and now would be demanding the territory’s return.

Returning Hong Kong meant transferring millions of people to communist China.  The PRC committed to respect Hong Kong’s uniqueness for a half century.

However, Beijing never promised to hold fully free elections.  Rather, it stated:  “The chief executive will be appointed by the Central People’s Government on the basis of the results of elections or consultations to be held locally.”

The Basic Law (essentially the territory’s constitution), approved six years later by Beijing, provided for “nomination by a broadly representative nominating committee in accordance with democratic procedures.”   The PRC claims that is what it is implementing.

As of 2017 residents will be able to elect their ruler, but only from candidates vetted by Beijing.  It won’t be real democracy, but then, there never was much chance that the Chinese Communist Party would institute real democracy in any area under its control.

That’s not fair to Hong Kong’s residents.  So it’s impossible not to admire the protestors.  However, their very passion threatens their objective.  They have divided over tactics and sparked criticism from some other residents.

The greatest risk is that the Chinese leadership might believe it must choose between repression and either chaos or democracy.  In 1989 the CCP sent in tanks to clear democracy-minded demonstrators out of Tiananmen Square.

Beijing would pay an even higher price for cracking down in Hong Kong.  Still, the Chinese regime places self-preservation above everything else.

Moreover, if China violently dispersed the protestors, it would not likely stop there.  Media freedom and judicial independence also would be at risk.

This week tensions eased as demonstrators and government officials agreed to talks.  Democracy advocates should temper their idealism with an acute sense of pragmatism.

Beijing might sacrifice the territory’s chief executive, Leung Chun-ying, and make other concessions, such as broadening the nomination process.  But the PRC will insist that Chinese officials, not Hong Kong residents, be in charge.

Unfortunately, as I write in Forbes online, “Nothing the U.S. does can bring democracy to the territory.  To the contrary, the more Washington attempts to intervene, the more likely China is to perceive the demonstrators to be threats.”

Democracy advocates have moral right on their side.  Still, raw power is likely to prevail in any showdown.  The protestors must temper idealism with prudence.  They must not allow the perfect to become the enemy of the good for their own sake—and ultimately that of Hong Kong and China as well.