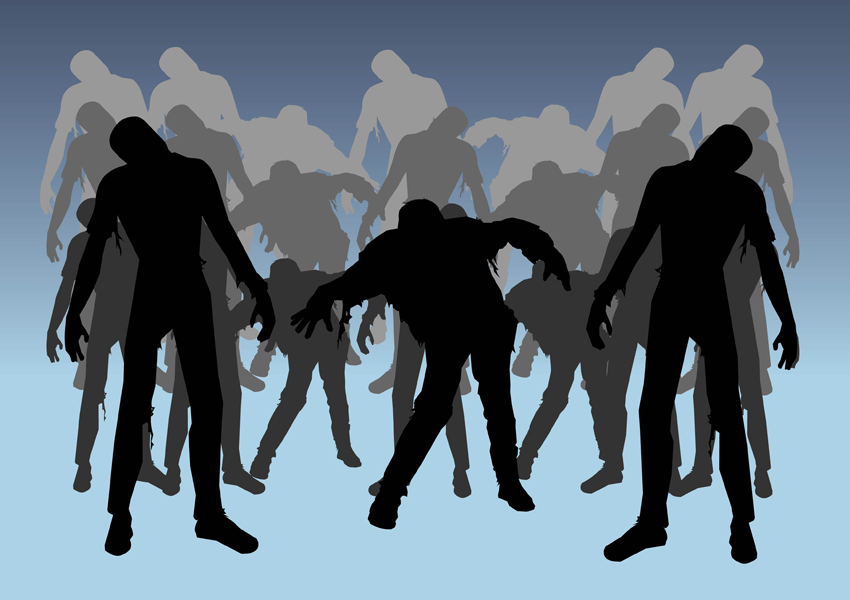 There has been a lot written about the harm caused by the Jones Act. On this very site, we’ve explored how the restrictive cabotage provision drives up the price of goods and contributes to Hawaii’s high cost of living. But while the Act certainly impacts the people of Hawaii on a day-to-day basis, there’s one element that no one is talking about:

The Jones Act has left Hawaii vulnerable to the Zombie Apocalypse.

It’s the dirty secret that no one in the state has uncovered … until now. Too many of Hawaii’s political leaders have been under the thumb of pro-Jones Act lobbyists like Big Zombie. But unless we take decisive action, you may find yourself cursing the price of nails while you search for materials to board up your windows.

Therefore, in the interest of preventing our state nickname from changing from “the Aloha State” to “Braaaaaiiiinnns” we present the top five ways that the Jones Act has made it more difficult for our citizens to fend off a zombie attack.

We joke about the high price of living in paradise, but what about when skyrocketing energy costs force you to choose between taking refuge in a stifling house or watching a desiccated zombie hand grope its way through your open window? The Jones Act currently prevents affordable access to Liquid Natural Gas (LNG), which would help lower our energy bills. When you’re frantically chopping off zombie fingers and trying to reinforce the window screen, you’ll wish the Legislature had sought an exemption.

4. No ferry system to help us escape to (or gather help from) the other islands after the infrastructure collapses and the airport is overrun.

So you’ve put together a small, but hardy band of survivors and fought your way to the airport, only to see the only guy who knows how to fly get bitten when he inexplicably wandered off by himself to use the bathroom and/or meditate on the human condition. As you use one of your precious remaining bullets to put him out of his misery, you’ll wish there was some other major mode of public transport that could get you off the island. (After all, you had heard rumors that Kauai is zombie-free, and one of your group has received a few ham radio signals from a sanctuary in Maui.) If only the Jones Act didn’t bar the existence of an inter-island ferry system. Then you and your group could fight your way to the pier and make your escape to one of the other islands. (Assuming, of course, that you’ve already ascertained that your ferry driver is also bite-free. You’re not rookies anymore.)

3. You will inevitably find yourself with people who—despite being quite aware of the danger that surrounds them—will constantly let their guard down at the worst moment and get bitten, forcing you to face the death of your friends and companions on a near-constant basis.

O.k., this technically isn’t the fault of the Jones Act, but I think we can all agree that it is very, very annoying. Especially when even a child could outrun the average zombie. Seriously, how do zombies catch people? And why don’t people double-knot their shoes and close doors behind them?

2. Significant barriers to the creation of makeshift zombie-slaying weapons.

Ammunition is precious in the Zombie Apocalypse. Assuming that you haven’t been so unfortunate as to end up with super fast rage zombies, but are instead facing the more conventional slow-trudging variety, you’ll want to save your bullets by constructing a number of makeshift traps and weapons to kill the zombie invaders. If you’re especially cool, you might also want to dispatch the zombies with a katana. (Warning: If you’re not sure you’re cool enough to kill zombies with a sword, it is suggested you stick with more conventional weaponry, such as a baseball bat studded with spikes. Nothing is more pathetic than someone who can’t pull off awesome samurai moves trying to kill hordes of zombies with a katana. You may end up being the first to learn whether zombies can laugh at you. Before they eat your brains.)

Unfortunately, the Jones Act presents a serious bar to the creation of makeshift zombie-killing weapons and traps. We are forced to pay a premium for the supplies to be shipped from the mainland and—as anyone who has been involved in a building project on an outer island can tell you—that’s when the supplies are there at all. Nothing could be more disheartening than learning that the red paint you need to leave vague, disquieting messages on your house for passers-by is going to be two weeks late and 30% more expensive than you thought. And all that time spent honing your katana moves will be for naught when you realize that the ship from Japan you heard about is bypassing Hawaii because the Jones Act requires it to unload in California.

1. The high cost of food will lead to the formation of scavenging bands of raiders and possible cannibal enclaves.

Ever gripe about the high cost of cereal or lunch meat? Every day, right? Well just imagine how much worse it will be during the Zombie Apocalypse. In fact, most of your daily existence will be spent scavenging for food and trying to remember to check behind half-closed doors before ransacking someone’s pantry. (Don’t worry. That thump you heard was only the cat. Or a zombie trapped in the basement. Pro tip: Don’t investigate it. Just make sure the doors are closed.)

You may think that you can solve this problem by pooling together to start a farm or seeking out other survivors who are better situated. But if we’ve learned anything from fiction, it’s that your small garden will inevitably be attacked by scavenging bands of raiders. And then again by zombies. Trying to find other communities will only lead you into situations where you are suddenly under the thumb of a charismatic local psychopath, or have run into a group that has taken to cannibalism with a startling rapidity and comfort.

If only the Jones Act didn’t make food so expensive in Hawaii. Then you could relax in your own barricaded home with your plentiful supply of hoarded foodstuffs, safe from the chaos outside.

Because we all know that in the Zombie Apocalypse, people are the real monsters. And so are the zombies. And also the Jones Act.