Greeks Vote Against Euro and For Democracy 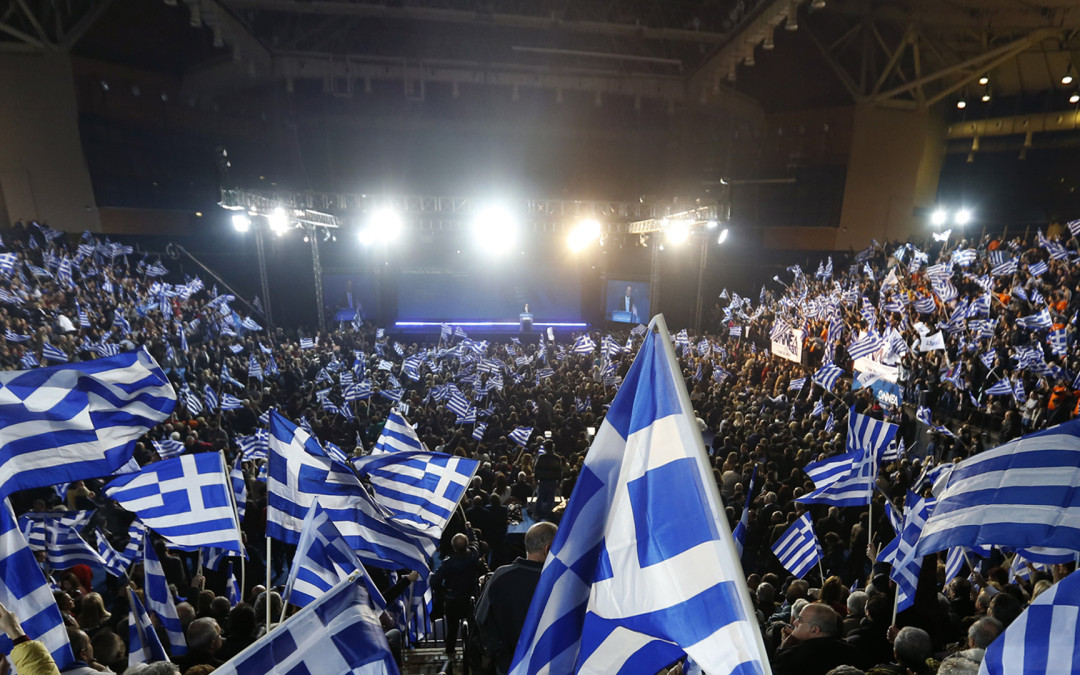 Greece’s parliamentary elections could reshape Europe. In voting for the radical left the Greek people have reinvigorated home rule and democracy across the continent.

Greece has been in economic crisis seemingly for eternity. Even in the Euro the system could not generate the growth necessary to repay the debt:  the economy was hamstrung by enervating work rules, corrupting political influences, profiteering economic cartels, and debilitating cultural norms.

Syriza, meaning Coalition of the Radical Left, arose to challenge the two establishment parties. Headed by Alexis Tsipras, Syriza won 36.2 percent and 149 seats, two short of a majority, on Sunday.

Most important, Syriza promised international debt renegotiation. Current debt runs a crushing $270 billion, or 175 percent of GDP (up from 109 percent in 2008).

European officials expressed hope that Tsipras would move to the center after winning office. But abandoning the promises that got him elected would wreck his credibility. Doing so also would threaten the unity of Syriza, a heterogeneous collection of smaller parties.

However, Athens does not have much time to win concessions. The current bailout plan expires at the end of February. Without a replacement program Greek banks would no longer have access to the European Central Bank.

Athens has few other revenue sources. Since the Syriza government cannot print Euros, it would have no way to fund a budget estimated to be in the red even before any new spending. Moreover, Athens would face default on its debt payments and a possible financial crisis.

At this point the only answer might look like exiting the Euro, or “Grexit,” which would allow Athens to print money freely. The process would be difficult, but would free Greeks to learn from their mistakes and find their own path.

Still, Syriza says it remains committed to a negotiated settlement within the Eurozone. But European leaders so far insist that the bail-out essentials cannot be renegotiated.

Syriza assumes its creditors are bluffing because they want to keep Greece in the Euro. That’s no longer clear, however. Greece accounts for just two percent the Eurozone’s collective GDP. The prospect of Greece’s departure no longer triggers panic elsewhere in Europe.

Indeed, if the EU does not hang tough, it will encourage other hard-hit governments to demand similar concessions. Moreover, a slowing economy has reduced the German public’s willingness to act as the Europe’s banker of last resort.

The political consequences might be more important than the economic impact. Grexit would return economic decisions to Athens.

Leaving also might stop further continental consolidation. The 19-member Eurozone is unstable because the unified monetary policy is not matched by unified budgetary policy. Eurocrats have been trying to expand their control. Moreover, while the Eurozone is separate from the 28-member European Union, a fracturing of the first would exacerbate tensions in the second.

A Eurocratic elite, consisting of politicians, academics, businessmen, journalists, bureaucrats, and lobbyists based in Brussels and national capitals, favors European consolidation in part because the system suppresses public accountability. But now popular opposition is exploding.

Euroskeptic parties did well in last year’s election for the European Parliament and having been gaining votes in national contests as well. If Syriza successfully flouts the Brussels consensus popular opposition to the EU as well as Euro is likely to grow.

As I note in Forbes online: “Europe will survive, whatever the fate of Greece, the Euro, and the EU. But the latest election in the birthplace of democracy offers hope for greater popular accountability and control across the continent. For this Tsipras and Syriza deserve Europe’s thanks irrespective of what happens next in Greece.”