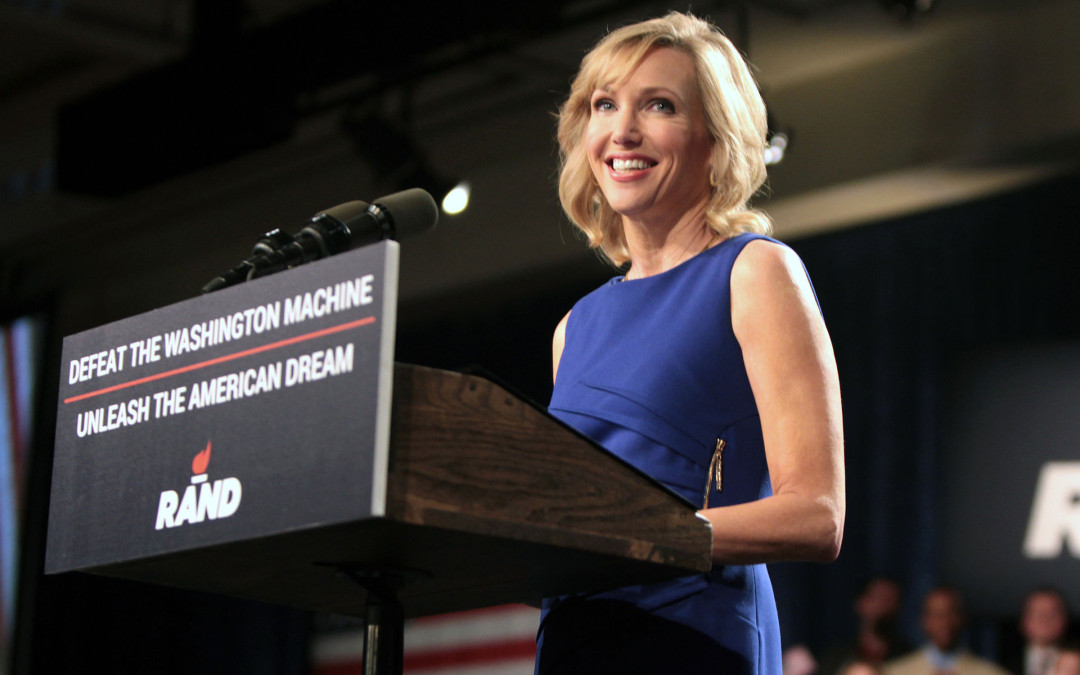 Americans have a deep ambivalence about the role of First Lady.

In a 1992 segment of Nightline correspondent Jackie Judd observed,

“Americans are most comfortable, for example, with first ladies who are gracious, stand – by – your – man wives, women who also adopt indisputably good causes. Any more than that, such as when Rosalynn Carter attended some cabinet meetings, makes people uneasy, and now there’s a potential president and first lady who say they’re a package deal.

“Gov Bill Clinton, (D), Presidential Candidate: I always say that my slogan might well be, ‘Buy one, get one free.’”

What ensued (observed Judd) is unprecedented scrutiny and criticism of a political wife’s thoughts, deeds and ambitions.

Presidential candidate Rand Paul has not similarly thrust his wife Kelley into the political debate. That said Kelley Paul now launches the publication of her new book True and Constant Friends: Love and Inspiration from our Grandmothers, Mothers, and Friends contemporaneously with her husband’s presidential campaign launch.

On the surface, a more nonpolitical topic than “the female bond” would be hard to imagine. Per the publisher’s website:

Feeling blessed to be one of seven friends who met and grew close in college-and looking forward to their celebration of a milestone birthday together-Kelley Paul wanted to know more about the women who were their first sources of love and inspiration, as her own grandmother and mother have been to her.

So she asked each friend to tell her the story of a woman who influenced and guided her, who fostered her sense of joy, independence and courage. As you read each one, you’ll discover, as Kelley did, that they’re the stories of women everywhere, for they are personal yet universal, ordinary yet extraordinary.

Nonpolitical? Let’s take a peek beneath the surface. There are several aspects that make this book relevant to the 2016 presidential race. (For those of my readers who are not political junkies — if any — this book, and its topic, is lovely on its own terms. That said, it has political relevance even if unintended.)

First, feminist cultural critical Carol Hanisch wrote a 1970 essay entitled “The Personal is Political.” This is a concept that became axiomatic to Second Wave feminism and remains relevant today. As nicely summed up at About.com in Women’s History, “(Hanisch’s) essay ‘The Personal Is Political’ … noted that ‘political’ refers to any power relationships, not just those of government or elected officials.”

Next. There seems to be a profound evolution ongoing within libertarianism. It has not fully been assimilated by the culture but … could have big political ramifications, especially in the 2016 cycle. What is this about?

To oversimplify matters… libertarianism emerged as an intellectual reaction to the many pretensions and excesses of Big Government. That gave libertarianism an oppositional cast.

Now, thought leaders such as Cato Institute’s David Boaz, in his book, The Libertarian Mind, and Jeffrey Tucker, “Chief Liberty Officer” of the 4,000 member online social network Liberty.me, are beginning to address the important question of what libertarians stand for, rather than that to which they stand in opposition. There is a backstory to this.

According to an essay on Hayek in the Stanford Encyclopedia of Philosophy:

“His life’s work, for which he won a Nobel Prize in 1974, illuminated the nature and significance of spontaneous order. The concept seems simple, yet Hayek spent six decades refining his idea, evidently finding elusive the goal of being as clear about it as he aspired to be.

“Cooperation evolves among people who need not share a language, need not be aware of each other’s existence, and need not be aware of their mutual dependence. They are only vaguely aware of the thousands of jobs that need doing so as to supply inputs that enable them to have a finished product to sell. Particular agents seldom if ever have more than a glimpse of the big picture, yet they manage to come together to form a community, and almost all are vastly better off as a result.”

The answer to the question of what libertarians stand for which seems to be emerging: society (of which the market is a subset) and culture. This potentially has profound political implications. True and Constant Friends implicitly is supportive of that process. The political elite’s Keepers of the Conventional Wisdom find Rand Paul baffling. As I have earlier written at Who Is Rand Paul?, “As Aaron Blake, a columnist for the ever-conventional Washington Post, says, “Rand Paul is an enigma wrapped in a riddle. And four years after he burst on to the scene in the 2010 Kentucky Senate race, we’re still trying to figure out precisely who he is.'” True and Constant Friends – although not a book of social philosophy — offers a wonderful exemplum of the very values that New Libertarian Thought appears to be settling upon.

Now, having saved the politically best tea leaf for last, the introduction to this work is by Senator Rand Paul. Most public writings by officials and candidates are tendentious, calculated, and tedious. Sen. Paul’s seven page foreword to True and Constant Friends is, rather, an intimate, joyful, and very personal tribute to the women who proved powerful examples in his life. Rand Paul pays respectful, vivid, and affectionate tribute, without condescension, to the powerful woman to whom he is married and to the strong women from whom he descended.

Consider his recollection of his father’s mother, Margaret Dumont Paul. “I interviewed my grandmother when she was ninety about her work … as a volunteer for the American Bible Society. She spoke of taking the trolley to downtown Pittsburgh to deliver Bibles to an African American church. … Her trip to downtown Pittsburgh, especially alone, was considered daring at the time. She never told her husband of seventy years about delivering those Bibles.”

Democratic strategists and Progressive propagandists accuse Republicans and conservatives of prosecuting a “war on women.” Not so. Rand Paul’s introduction to True and Constant Friends — although not a document of militant feminism — provides a becoming celebration of strong women, including his wife and to the matriarchs of his bloodline.

There is an additional subtly fascinating aspect to True and Constant Friends. It is beautifully illustrated … and in a way that runs counter to the caricature of conservatives, libertarians, and Republicans as hardhearted philistines. Kelley Paul:

“The paintings in this book are original works of art created by the women of the HomeFront Family Preservation Center in Lawrence, New Jersey. Every day, HomeFront changes lives by providing refuge and hope to homeless mothers and their children. Many of the women at HomeFront have struggled with addiction, violence, and abuse. And yet once in a supportive, healthy environment that offers them and their children a safe haven, these same women have been able to express themselves through artwork that is hopeful, thoughtful, and life affirming.”

In True and Constant Friends Kelley Paul has written and compiled an extraordinary work. Its only significant potential political complication resides in its risk of triggering a Draft Kelley Paul for President movement that could consign Rand Paul to future duty in the White House’s East Wing as America’s first First Man. There are worse fates.