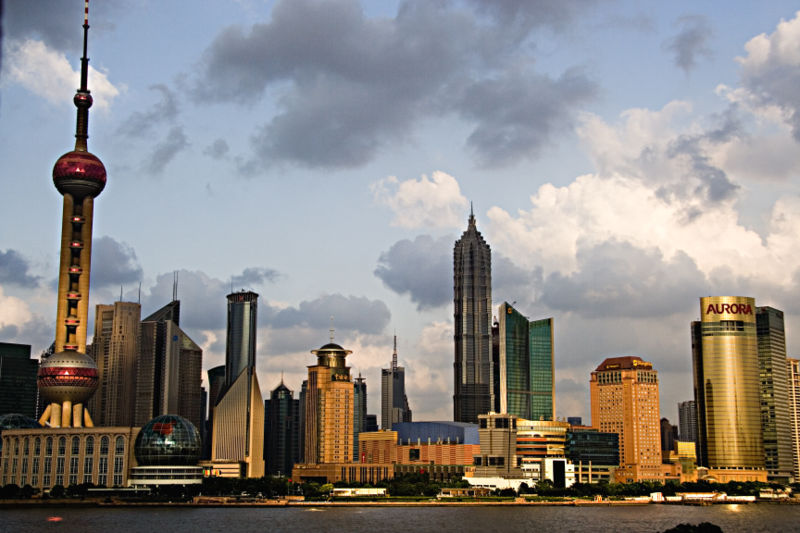 In contrast, when I first visited Shanghai a couple decades ago there were few buildings, commercial or residential, racing skyward. Pudong was mostly empty, with more brush and trash blowing down the streets than buildings with people working in them.

But there is another China. More distant towns offer a vision into the past—more traditional, less advanced, more isolated. Shift to the nearby countryside and incomes drop substantially, averaging less than $2000 per capita. My traveling group stopped by the remains of an ancient fortress and the Great Wall, which required walking along dirt roads lined by homes constructed with bricks taken from the ruins. The primitive toilet had holes in the wooden floor, through which the ground was visible.

However, while poor, the residents, too, were increasingly better off. The main street sported two stores with modern food and sundries. I spotted a farmer leading two cows with one hand while speaking on his cellphone in the other. Now modernity meets tradition even in rural China.

National pride mixes with personal frustration over government restrictions on liberty. Virtually everyone, including CCP officials, publicly affirm the importance of democratic values and human rights. But they soon follow with warnings against threats of disunity and the sort of chaos evident in the Arab Spring.

Younger Chinese speak with horror of what their parents went through during the Cultural Revolution. Criticism of government policy is freely expressed in conversation. Censorship and repression usually appear only when such sentiments are magnified through social or traditional media.

No one outside of government seems happy with internet restrictions. However, some people noted that bans on sites such as Twitter, YouTube, and the New York Times were of interest mostly to elites who speak English. And these people are most able to circumvent such restrictions.

While there are American-style liberals in China, some intellectuals and others view freedom through a different, and they say Chinese, prism. Some reject U.S.-style democracy without exactly affirming CCP-led autocracy.

No one in the PRC wants conflict with America. Although China’s military power is growing, that of the U.S. is unmatched. Moreover, Beijing policymakers are aware of the close economic connection between the two nations which has proved to be so profitable for the PRC. Still, virtually everyone backs their government’s broad territorial claims in the Asia-Pacific.

Despite everything, it’s hard not to come away from visiting China with a sense of hope. The country is so much more prosperous than before, which increases Beijing’s stake in a stable international order.

The PRC also is freer, despite the recent crackdown on dissent. Religion is spreading despite attempts to reduce its visibility. Criticism is widespread, even though such views cannot be broadcast.

As I wrote in Forbes: “While Chinese international power undoubtedly is increasing, Beijing will remain constrained by poverty, demography, and geography. A more assertive foreign and military policy has encouraged the PRC’s neighbors to arm themselves, cooperate with their neighbors, and move toward the U.S., a dubious trifecta for China.”

Both sides need to work to maintain peace. In Shanghai the Chinese have built a modern, world-class city out of colonial humiliation. Yet citizens of the one-time oppressors are joining to create a prosperous city and nation.

Today Shanghai is a natural in its new financial role, just like London and New York. Hopefully its success, and that of the rest of China, will help keep the Chinese people focused on building a peaceful future.