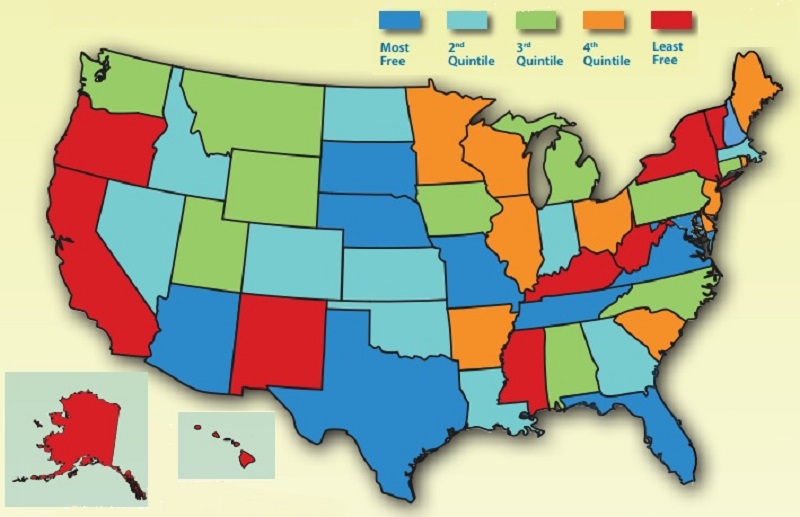 An extensive survey of economic freedom in the United States, Canada, and Mexico shows Hawaii as one of the five worst performing U.S. states, tied for 46th place with New Mexico. The report,Economic Freedom of North America, is published by the Fraser Institute and co-published by the Grassroot Institute of Hawaii, the Aloha state’s free market think-tank.

The comparative survey of economic freedom is based on ten different factors in the areas of government spending, taxes, and labor market freedom. Overall, the report notes that economic freedom has been declining in North America as further constraints are added to the ability of individuals to act in the economic sphere. The localities with the best scores on the Index are Canadian, with New Hampshire coming in as the most economically free state.

Placement on the Index not only indicates comparative economic freedom in a region, but also economic success. The report notes a positive correlation between economic freedom and economic growth, per-capital size of the economy, and entrepreneurial activity. Per capita income also reflected the position on the Index, with the least free quartile having a average per-capita income nearly 8% below the national average, while the most-free quartile was almost 7% above it.

“Hawaii’s abysmal showing as one of the least economically free states in the U.S. is no surprise to those of us who have been advocating for change in the state,” said Keli’i Akina, Ph.D., President of the Grassroot Institute of Hawaii. “It is well-known that the burdensome regulation and taxation schemes of our state discourage investment and entrepreneurship–and are especially unwelcoming to small business.”

“With the legislative session nearly upon us, it is critical that we address the lack of economic freedom with new policies based on best practices and a focus on real reform,” Dr. Akina continued. “In the next month, the Grassroot Institute will be hosting a panel where we will discuss the necessary steps to making our state more economically free and in which we will release a special Hawaii supplement to the EFNA report. We will, of course, be inviting all legislators to join us for that event and we hope they will take advantage to learn more about the policies that can turn around the state’s economic performance.”

The Economic Freedom of North America can be viewed at:  http://www.freetheworld.com/efna.html