Puerto Rico Seeks a Jones Act Exemption. Can Hawaii Learn from their Example? 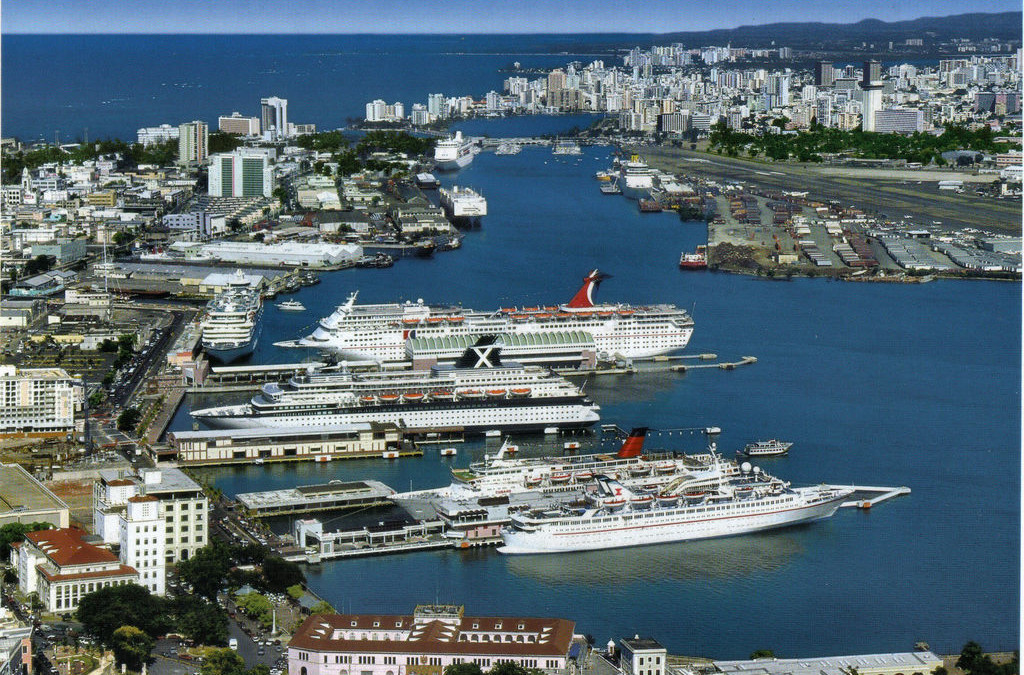 Congressman Pedro Rafeal Pierluisi Urrutia, formally known as the Resident Commissioner of Puerto Rico who serves as the non-voting territorial delegate at large to the U.S. Congress, was instrumental in arranging and gave the Opening Statement of the hearing. The Opening Statement Cong Pierluisi gave at the hearing is the short version of his remarks; the longer version for the record was submitted in text. The Congressman is a member of the Pro-Statehood New Progressive Party of Puerto Rico (Partido Nuevo Progresista) and caucuses with the Democrats in the U.S. House of Representatives.

Cong. Pierluisi noted, “This is the sixth hearing on Puerto Rico that Congress has held in the past 11 months,” and emphasized the need to reduce the cost of electricity in the Commonwealth to improve the economic condition for residents, businesses and industry.

Towards that end Cong. Pierluisi outlined the need for PREPA to inter alia (i.e., among other things) replace outdated generation plants and switch from a heavy reliance on petroleum fuel to a greater dependence on lower cost and lower emissions producing domestic Liquefied Natural Gas (LNG) from the U.S. Gulf. There is a single electric generating plant on Puerto Rico using LNG fuel imported from more expensive foreign sources largely from Trinidad.

In order to facilitate the transportation of LNG from the U.S. Gulf Coast to Puerto Rico an exemption from the federal Jones Act (Section 27 of the Merchant Marine Act of 1920 as amended) as there are no LNG Carriers (highly specialized cryogenic tankers capable of carrying LNG at minus 260° F) existent in the Jones Act fleet. No LNG Carrier has been built in the U.S. since the late 1970’s, and contemporary construction of a LNG Carrier at a U.S. shipbuilding yard to met the domestic build requirement of the Jones Act is not considered practical by most objective observers.

Cong Perluisi stated there “. . . . are eight constructive steps the federal government could take,” including the need to “update the Existing Jones Act LNG and LPG Exemption in Puerto Rico” to allow foreign built LNG Carriers operating U.S. flag to be employed in the Puerto Rico trade. This kind of Jones Act exemption would facilitate Puerto Rico taking advantage of the new liquefaction export terminals on the U.S. Gulf Coast. In fact, as of the instant hearing date, the LNG Carrier ENERGY ATLANTIC was anchored off Sabine Pass, Texas, in anticipating loading the first LNG shipment from the contiguous U.S. since 1964.

In 1996, an exemption from the Jones Act was enacted to allow foreign built gas tankers registered U.S. flag to carry gas cargoes between the contiguous U.S. and Puerto Rico (P.L. 104-324,Title VII Sec. 1120 (f), Oct. 19, 1996, codified at 46 USC 12120, Liquified Gas Tankers). However, this exemption was restricted to gas tankers built prior to October 19, 1996 and too restrictive to be of any practical value as the ships would be over 20 years of age and nearing the end of their useful life.

Cong. Pierluisi proposes in his opening statement that the 1996 statute for liquefied gas tankers be updated by passage of his Puerto Rico Interstate Commerce Improvement Act of 2013 (H.R. 2838) introduced on July 25, 2013. The later legislation provided a exemption for self-propelled foreign built dry and liquid bulk carriers registered U.S. flag to engage in the domestic Puerto Rico trade, which would provide a broader exemption that the 1996 statute.

In comparison to the Hawaii Congressional Delegation, Cong Pierluisi is actively dealing with the high cost of living in the Commonwealth by addressing the costs of electrical generation on Puerto Rico and the cost of ocean shipping between the island and the mainland. This active role despite the fact that the electricity and shipping rates are lower in Puerto Rico than in Hawaii.

Compare. the residential electricity rate on Puerto Rico was 19.3 cents per Kilowatt Hour (KWH) in December 2015 versus on Oahu Island 25.67 cents/KWH in December 2015. The distance between the primary mainland port of Jacksonville, Florida, and San Juan, Puerto Rico, of 1121 nautical miles (nm) is half that from Los Angeles, California, to Honolulu, Hawaii, of 2233 nm. This difference in distance inter alia makes freight rates lower in the domestic Puerto Rico than Hawaii trade.

Key excerpts from Cong Pierluisi’s opening statement for the record include:

This is the sixth hearing on Puerto Rico that Congress has held in the past 11 months. Later this month, another subcommittee of the Natural Resources Committee is expected to hold a seventh hearing about Puerto Rico. During the time period in which Congress has debated this matter, but done nothing, the situation in the U.S. territory has gone from bad to worse.

The Puerto Rico government has been unable to pay hundreds of millions of dollars in tax refunds it owes to taxpayers, in payments it owes to private-sector companies that sold products to or rendered services for the government, and in contributions it is required to make to its various public pension funds.

On December 16, 2015, Speaker Ryan issued a public statement, noting that he had instructed the committees of jurisdiction in the House to develop a “responsible solution” to the crisis in Puerto Rico by March 31, 2016.

The most pressing energy-related challenge in Puerto Rico is the high cost of electric power. Puerto Rico is an island jurisdiction that produces no petroleum, natural gas or coal, and that relies heavily on imported fuel—mainly petroleum—to generate electricity

In Puerto Rico, the high price of electricity is compounded by the low ability to pay.

The goal, then, must be to reduce the cost of electric power for the residential sector, the commercial sector, and the industrial sector in Puerto Rico.

Puerto Rico’s electricity is supplied by the Puerto Rico Electric Power Authority, known as PREPA, a public corporation established in 1941.

According to the latest statistics published by the U.S. Energy Information Administration within the U.S. Department of Energy, in 2013 Puerto Rico generated 55 percent of its electricity from petroleum, 28 percent from natural gas, 16 percent from coal, and 1 percent from renewable sources.

First, operations at PREPA must be fundamentally reformed.

Second, PREPA must diversify its fuel supply, reducing its reliance on petroleum (which is not used in the 50 states to generate electricity) and increasing its use of natural gas and renewable energy sources. With respect to natural gas, it must be emphasized that the United States became the world’s largest producer of natural gas in 2011, and the first export terminals necessary to deliver that gas to other jurisdictions (whether non-contiguous states like Hawaii, U.S. territories like Puerto Rico, or foreign nations) will come online later this year. Puerto Rico should have the option of purchasing natural gas from the states, rather than from foreign countries, because it may be able to do so more efficiently and at lower cost. However, there are no Jones Act-compliant tankers available to transport natural gas from the states to Puerto Rico, which is why I introduced legislation to authorize modern tankers built outside the U.S. but otherwise compliant with the Jones Act to fill this gap.

Hopefully, one purpose of this hearing is to explore ways in which the federal government—both the executive branch and Congress—can help Puerto Rico improve its energy system and provide affordable electricity to consumers.

Update the Existing Jones Act LNG and LPG Exemption in Puerto Rico: Congress should enact my legislation, the Puerto Rico Interstate Commerce Improvement Act, in order to increase the number of maritime vessels authorized to transport LNG and liquified petroleum gas (LPG) from ports in the U.S. mainland to ports in Puerto Rico. The Jones Act has three main pillars. It requires that products transported between ports in the United States be carried on vessels that are predominantly owned by U.S. citizens and registered in the United States, built at shipyards located in the United States, and operated with mostly U.S. citizen crews. In 1996, Congress granted Puerto Rico a narrow exemption from the Jones Act. That 1996 law authorizes two categories of vessels to transport LNG or LPG from ports in the U.S. mainland to ports in Puerto Rico, even though those vessels do not satisfy all three pillars of the Jones Act. The first category are vessels built outside of the United States prior to October 1996. The second category are vessels built in the United States prior to October 1996, but then registered by their owners in foreign countries. Under the Jones Act, once a vessel has been registered outside of the United States, it cannot subsequently be re-registered in the U.S. According to the best available statistics, only about 60 of the 450 or so foreign-built LNG tankers in the world qualify for the 1996 exemption under category one. The average age of those 60 tankers is about 30 years old, while the average age of all LNG tankers in operation is about 12 years old. In addition, there are only about 11 LNG tankers that qualify for the 1996 exemption under category two, and all are at least 35 years old. My legislation would update the 1996 exemption, allowing any vessel built outside of the United States, not merely those built before October 1996, to transport LNG and LPG from a port in the U.S. mainland to a port in Puerto Rico. This will benefit energy producers in the states, who will gain access to an important new U.S. market. It will also provide a direct benefit to consumers in Puerto Rico, who will see their electricity bills decrease and their environment improve.