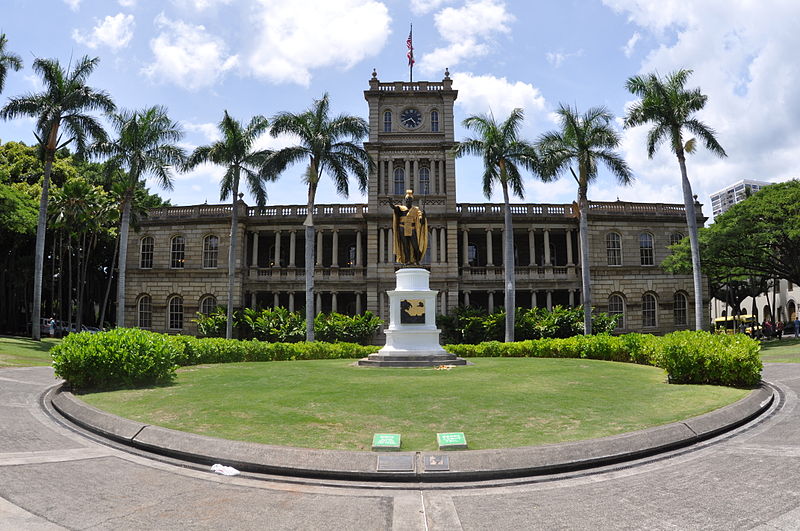 In a ruling that no one who was paying attention could claim to be surprised by, the Hawaii Supreme Court yesterday issued a 4-1 memorandum opinion holding that the “agricultural lands” section of the Hawaii Constitution isn’t self-executing, and which approved the State Land Use Commission’s reclassification of land on Oahu from agricultural to urban uses for the “Koa Ridge” master-planned community:

its constitutional history as well as the legislative history of Act 183 do not reveal an intent to require the LUC to delay reclassifying agricultural land pending formal designation of [Important Agricultural Lands].

Slip op. at 3. Justice Pollack, as he did in a prior case on the same issue, dissented.

We say no surprise, because only a few months ago, the same majority (Chief Justice Recktenwald, and Justices Nakayama and McKenna, joined by a circuit judge sitting for the recused — and now retired — Justice Acoba) held the same thing in a published opinion in Sierra Club v. D.R. Horton-Schuler Homes, No.SCAP-13-0002266 (Dec. 22, 2015) (the case involving the Hoopili development). The court in that case reached the same conclusion as here: because the provision isn’t self-executing, the legislature didn’t intend to hold up reclassifications while the IAL designation process was not complete. The issue here was virtually the same as in that case, and there were no personnel changes on the court to have caused us to expect a different result. Our coverage of the oral arguments in the case are posted here, along with analysis by guest-blogger Paul Schwind.

“Act 183” was the statute in which the legislature created the “Important Agricultural Lands” framework. These are lands, either designated by the property owner itself, or, in some cases, by the counties, that are for actual agriculture. As Hawaii land users know, back when the new state was adopting the statewide land regulation regime, “ag” designation was the catch-all zone, and lands that they couldn’t figure out where else to put were designated as agricultural. Which means that a whole lot of land so designated isn’t really suitable for agriculture.

The court noted in a footnote:

The majority opinion relied on Save Sunset Beach Coalition v. City & Cnty of Honolulu, 102 Haw. 465, 78 P.3d 1 (2003), as well as the Horton-Schuler decision, which means that for the time being, this issue is pretty well-settled.

No Judicial IAL Designation Where County Has Not Done So

The memorandum opinion didn’t even analyze the issue, again. See slip op. at 3 (“Therefore, this opinion does not further address Appellants’ first and second points of error; rather, this opinion focuses on Appellants’ third point of error, whether the reclassification violated HAR § 15-15-77(b)(6).”). The court also made fairly short work of this claim, concluding that the Land Use Commission’s factual findings were supported by sufficient evidence. In effect, the plaintiffs were asking the court to preempmtively designate the land as “IAL” even though neither the landowners nor the county has done so, and the court — correctly, in our view — refused to do so.

The remedy the objectors asked of the court was “to ‘stay’ the reclassification of the potentially important agricultural land at issue pending formal designation of Important Agriculral Lands (‘IALs’) in each county.” Slip op. at 2. While couched as a “stay,” what the objectors really sought was a sweeping judicially-created blanket moratorium on the reclassification of any ag land that might (in the objectors’ views) be subject to a future IAL designation. The legislature didn’t buy it, nor have the courts.

Politics By Other Means

Highlighting the political nature of the lawsuit, one of the two plaintiffs was a former Hawaii state senator, who, for some odd reason, is named as a party as “Senator,” even though we presume he was suing in his personal capacity. The former senator was also a plaintiff in the earlier Horton-Schuler/Hoopili case.

So in other words, this case represented a swing for the fences, a Hail Mary pass, and an attempt to maybe get from the courts what they couldn’t achieve politically. With those type of nakedly political goals, is it any wonder the court rejected the overreach? But given their amazing success rate in Hawaii’s appellate courts, we suspect their motto on these type of overreaching cases is “nothing ventured, nothing gained,” and this type of loss only represents a temporary setback in their efforts.

Land use lawyers take note: we think this is a closer issue than the 4-1 outcome might suggest, because Justice Wilson did not participate in the case (he wasn’t on the court yet, and Justice Acoba recused), and there isn’t much doubt in our minds that were he to have taken part in the decision, he would have joined Justice Pollack’s dissent which concluded that the LUC needs “further guidance” in these type of cases. See dissent op. at 1-2 (“I would vacate the approval of the petition and remand the case to the Land Use Commission so that it may discharge its duty to find, by a clear preponderance of the evidence, whether or not the proposed reclassification is violative of Part II of Chapter 205. I would also provide further guidance to the Land Use Commission with regard to its review of the petition on remand.”).

Justice Pollack faulted the LUC for not adopting an express conclusion of law in its written order which so concluded — a result which the majority viewed as harmless, more of a scrivener’s error, because the other parts of the LUC’s written order adequately addressed the required issues, and “recognized the significance of important agricultural lands[.]” Slip op. at 21.

Justice Pollack, by contrast, believed that the LUC did not necessarily take into account the policy statements in the statutes which charge the commission with an affirmative duty to “conserve and protect agricultural lands.” This is entirely consistent with his views, expressed in other cases (see here and here, for example) that agencies are not supposed to defer to other agencies or even to the evidence presented by the parties, but must be active. And the project here is so large (768 acres and 3,500 homes) that it just can’t be “harmless” error for the LUC to not have made an express finding. That hook would have been enough for Justice Pollack to send it back down for a do-over to apply his “guidance” that the LUC needs to take its own look, and not just consider what the parties introduce. See dissenting op. at 10.

Thus, we think this issue isn’t resolved fully, and that the majority rule in Sunset Beach, Horton-Schuler, and this opinion, are only as safe as a single vote in future cases. The Koa Ridge project has made it past this hurdle, but the issue may be revisited in the future.