Why it’s so expensive to cool Hawaii’s schools 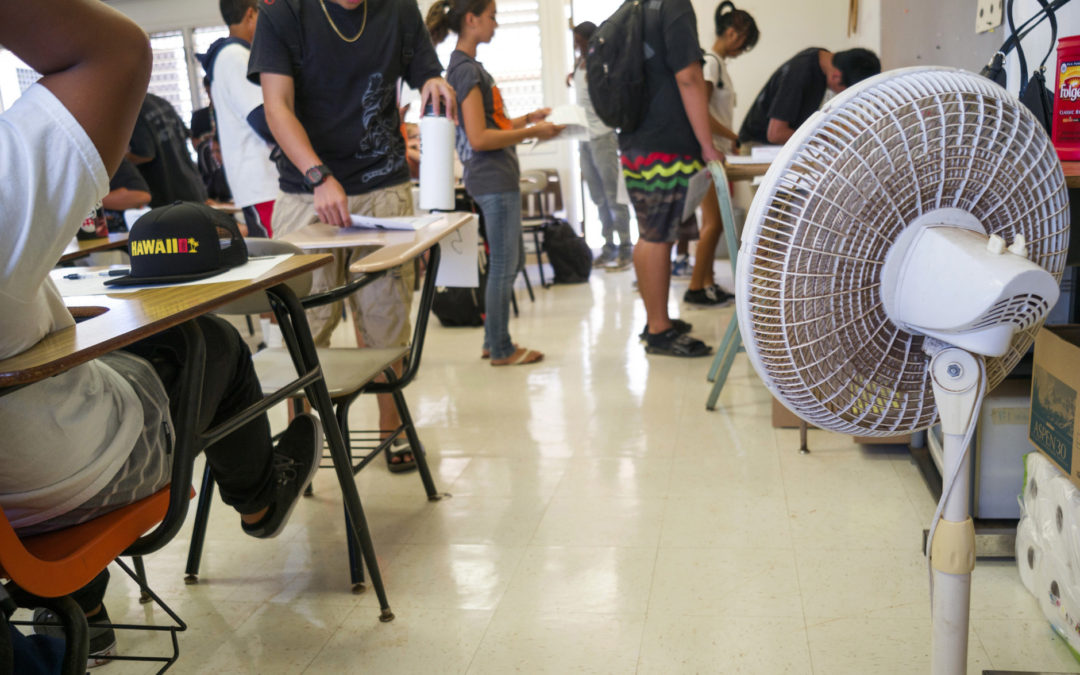 Nalu is a 5th grade student in Hawaii. Like all kids growing up in the islands, she’s used to wearing shorts & t-shirts every day, and having perpetual summer.

During the “cooler” months of the year, Nalu has no problem going to school. But something changes during the hotter months. Nalu tells her parents she can’t concentrate at school.

Her parents ask her if it’s the curriculum, or perhaps a conflict with a student. No – it’s just too hot in the classrooms.

Nalu faces the same problem that 180,000 students in Hawaii do each fall at the start of the school year, and again when the school year comes to a close in May: it is too hot in the classrooms to concentrate.

After backlash from parents and keiki across the islands, the Hawaii state government finally decided to address the lack of air conditioning throughout state schools in an initiative dubbed the AC Project. In May of 2016, the legislature passed a bill which authorized $100 million to “Provide for air conditioning, heat abatement, and related energy efficiency measures.”

However, when the Department of Education (DOE) received bids in June, the costs estimated by private contractors had skyrocketed – in some cases nearly 100 times as high as the original estimates. This meant that the approved $100 million was no longer enough to pay for the AC Project, and the entire process was put on hold.

So, why were the bids so high? Was this a case of private corporations taking advantage of the government at the expense of Hawaii’s keiki – or is something else going on here?

A quick look at the 283 page bid sheet, overflowing with requirements and guidelines, tells a different story. Buried in the bid sheet is an energy infrastructure project disguised as the solution to Hawaii’s hot classrooms. This has led to expensive, unnecessary mandates, which have contributed to the project delays.

An earlier version of the bill gives insight into the real intent of the AC Project, which required the DOE to “Establish a goal of becoming net-zero with respect to energy use by January 1, 2035.” Originally, the project would have been a joint effort between several departments to cool Hawaii’s classrooms while also taking the first step towards an expensive new green energy infrastructure.

However, as the bill progressed, legislators appeared to move away from a combined air conditioner/energy infrastructure project in an attempt expedite the process. In fact, the final version of the bill contained no energy mandates, and steered away from using green energy funds because they would be “limited to energy efficiency and conservation projects.”

Although the final version of the bill may lead taxpayers to believe that this is no longer a green energy infrastructure project, some bid sheets issued by the state contain the very same green energy requirements from earlier versions. What started as a cry for help from Hawaii’s students and teachers has left the DOE with a bloated bid sheet containing a hidden energy agenda that has halted the entire project; a project that lawmakers were adamant “must proceed as quickly as possible.”

Andrew Santos, President of Admor HVAC, was skeptical of the very specific requirements outlined in the bid sheets. Mr. Santos, whose company has donated AC systems to several local schools, proposed dividing the project into an AC portion and an energy portion. This would greatly reduce the per-classroom cost–allowing the quick installation of AC in Hawaii’s classrooms–while a simultaneous solar project could offset the inevitable electricity costs. Had lawmakers considered this plan initially, the AC units could already have been installed at $6,000 per room.

Though intentions may have been good, the goal of this initiative has been hijacked by special interest groups, exploiting the situation to further a long-term renewable energy agenda. As long as the AC Project continues to contain an energy infrastructure initiative, rather than focus on a solution to the problem at hand, we must ask ourselves: who exactly benefits from this? Certainly not Nalu, and the students and teachers who have recently returned to Hawaii’s sweltering classrooms.