In The Bluest Of Blue States, 9th Circuit Rebuffs (For Now) Attempt To Bar Republican Voters From The Only Election That Matters 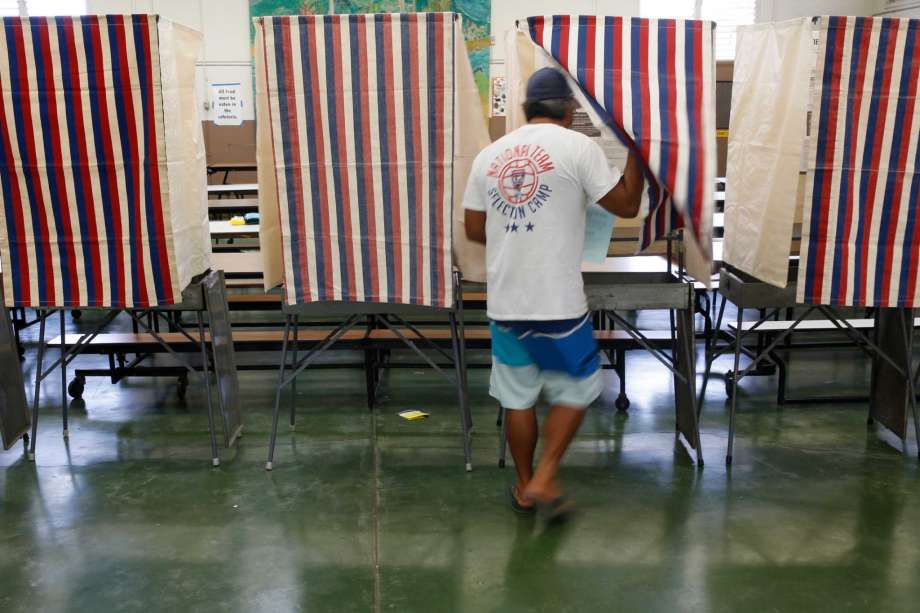 You may call us anti-Holmesian, but we’re wary of any judicial opinion that has “clear and present danger” as its standard of review. Like “shouting fire in a crowded theater,” this legal meme gives more heat than light in our estimation, and doesn’t really tell you much.

But the phrase was at the heart of the Ninth Circuit’s opinion in Democratic Party of Hawaii v. Nago, No. 13-17545 (Aug. 15, 2016), issued in August in the case in which the DPH challenged Hawaii’s “open primary” election.

We’ve been following the case since its inception, and won’t go into the background and details again except to say that Hawaii is really, really blue, and the goal of the lawsuit was to exclude those who have not sworn allegiance to The Party from the only election that truly matters in our one-party state, the Democratic Party Primary. As last Saturday’s primary revealed yet again, choosing the Democratic Party standard-bearer — with an isolated exception here and there — pretty much decides who wins the general election. But that wasn’t good enough, even though elected Democratic officials were not exactly enthusiastic about the lawsuit, at least on the surface, because The Party, apparently, desires a completely closed shop.

The Ninth Circuit rejected the challenge — which was, importantly, a facial attack on the requirements of Haw. Const. art II, § 4 and Haw. Rev. Stat. ch. 12 — concluding that the plaintiff had not introduced evidence (as in actual evidence, not merely its conclusions) to support its claim that an open primary severely burdens its associational rights by allowing outsiders to choose The Party’s candidates. In order to succeed, the plaintiff would need to show that there are no circumstances in which Hawaii’s open primary does not infringe on their associational right of Democrats to decide solely amongst themselves their anointed one. This is where the “clear and present danger” language came in:

Thus, unlike in Jones, the Democratic Party has provided no evidence showing a “clear and present danger” that adherents of opposing parties determine the Democratic Party’s nominees. See 530 U.S. at 579. As explained above, the lone statistic the Party cites is ambiguous at best. Likewise, the Party has not shown that Hawaii’s open primary system causes Democratic candidates to moderate their policy stances. See id. at 579–80. Absent evidence that Hawaii’s system affects the Party’s ability to select its nominees, the Party’s facial challenge fails.

To reach this ruling, the Court relied on data showing that in California, 20% of registered Democrats and 37% of registered Republicans planned to vote in the other party’s primary in 1998. Id. at 578. An expert testified that it was “inevitable” under California’s system “that parties will be forced in some circumstances to give their official designation to a candidate who’s not preferred by a majority or even plurality of party members.” Id. at 579. According to the Court, the evidence showed a “clear and present danger” that adherents of an opposing party would determine their rival’s nominee. Id. at 578.

Lawprof and election law guru Rick Hasen views it a bit differently. On his Election Law Blog (a must-follow for you election law junkies), he writes:

I had always read Supreme Court cases like Tashjian and CA Democratic Party v. Jones as standing for the principle that if the party objects to the open or closed nature of a primary, it is unconstitutional for the state to use that form of the primary for that party.

But today’s opinion says it is up to the party to provide actual evidence that the law severely burdens the party, namely with “evidence showing a ‘clear and present danger’ that adherents of opposing parties determine the Democratic Party’s nominees.”

So keep an eye on this case.

So which is it: the actual evidence standard that the Ninth Circuit discerned from Jones, or Professor Hasen’s read of Tasjian and Jones?  As someone with only an academic stake in the case, we’re of two minds (or at least we can see both arguments). As we wrote back in 2007 when the challenge to the open primary was first floated, “[t]he question posed by the lawsuit being considered is whether the U.S. Constitution mandates a particular form of primary election, one that allows the parties to determine who votes in their primaries, rather than having the state dictate the process. The Court has held that California’s blanket primary system unconstitutionally restricted political parties’ First Amendment freedoms of association. California Democratic Party v. Jones, 530 U.S. 567 (2000). However, the Court has also held that a closed primary system was unconstitutional, since it infringed upon the associational rights of a party that wished to open its primary to non-party voters. Tashjian v. Republican Party of Connecticut, 479 U.S. 208 (1986).”

On one hand, it makes sense to require some kind of proof and not invalidate a state constitution and statute upon mere allegations, even in the context of a facial challenge. This is a publicly-funded election, after all, and the public should be able to set the standards of who gets to vote, especially where the primary for all intents and purposes selects the eventual winner. On the other, shouldn’t a private political association be free to select its own standard-bearers?

As we wrote earlier, we think this turns on the mandatory nature of the open primary. If there’s no other way than the open primary for the Democratic Party to choose its candidate for the general election, there may be a problem: “The philosophical heart of the case is whether a primary election is about a voter’s choice or a party’s choice, but nothing we’ve read in the briefing so far has changed our initial prediction that the case is going to turn on the mandatory nature of the open primary. Our read of Hawaii law is that there’s no other way for a political party to choose its general election standard-bearer. Thus, however odd it may seem in an overwhelmingly Democratic state where the primary in many cases serves as the de facto general election, the Party’s right to pick whom it wants as its candidate to stand before the public in a meaningless election has a good shot at winning out over the State’s argument for a voter’s choice of whom he wants to serve as his representative.”

Finally, this was only a rejection of a facial challenge. Can the Democratic Party come up with the necessary evidence and try again? Will it take the case up to the Supreme Court, as Professor Hasen suggested might be fruitful?

Stay tuned folks, this one isn’t likely over.