US policies may hurt Micronesians more than they help 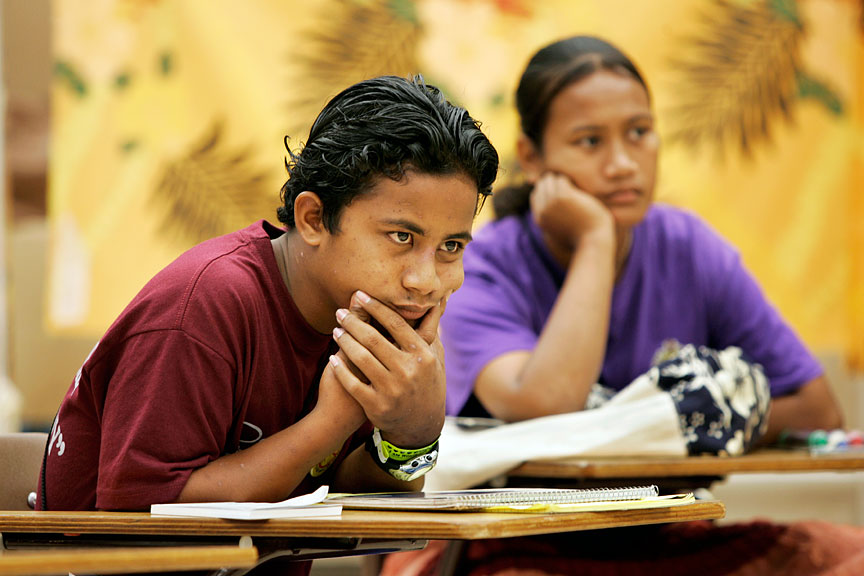 Many people in Hawaii care deeply for the plight of Micronesian immigrants arriving in the islands, but current efforts by the US government to fund education and healthcare initiatives may be hurting the people they are supposed to help.

To understand why these policies may be doing harm, it’s important to understand why Micronesians come to Hawaii in the first place. Immigrants from Micronesia come here for many reasons, including the promise of a better life, more opportunity and access to social services. This has been made possible because of a little known agreement called the Compact of Free Association.

In addition, Micronesians arriving in Hawaii cite three reasons for leaving their home islands: access to healthcare, education, and employment. However, US taxpayers spend a great deal to fund these issues, both locally and in Micronesia, and it’s not clear whether the money is spent wisely.

US FUNDED SCHOOLS AT HOME

Public schools in Micronesia are also eligible for US Department of Education funding of Special Education, bilingual education, professional development, college transition and other initiatives. These total millions more beyond the annual grant payments.

Despite the money flowing for decades, more than half of Micronesian students perform below their K-12 grade level. The government reports that nationwide, fifty percent of adults never finished high school.

THE COLLEGE OF MAKE-BELIEVE

Although only 1/5th of students at the College of Micronesia complete their course of study, nearly all students receive full US tuition assistance through PELL grants. The College of Micronesia’s appetite for the scholarship money is so great that federal auditors have found over a million dollars in overpayment errors as well as academically disqualified students receiving scholarships.

The College of Micronesia

Beyond subsidized tuition revenues for students, the College of Micronesia also enjoys contracts and grants from the US funded Micronesian government. The college reported $20 million in total revenues in 2015 while enrolling less than 3,000 students. Roughly 500 of those students will go on to graduate or transfer.

Precious few private sector jobs exist for these young people either way. One former US instructor at the college famously described its lack of organization and outcomes by terming it “The College of Make-believe.”

A further $20 million will be provided by the US, under the management of the Department of the Interior, for Micronesian health care this year. The sum places the Federated States of Micronesia among the world leaders in healthcare spending as a percentage of total GDP. The money is not used for training, planning or capacity building, but primarily supports regular recurring operations of the four barebones state in-patient facilities.

This healthcare spending is set to decline subtly, year by year, until 2024 at which point the Micronesians hope to negotiate a third round of aid. The Department of the Interior’s own officials have described the immediate response to these modest annual reductions as, “budget decline, congestion, and ad hoc cuts,” noting an absolute unwillingness to, “implement programs that trim inefficient and ineffective activities and raise fees for service.”

Lacking clear reporting on the tens of millions in annual aid, the US Government Accountability Office declared that data is so entirely absent and unreliable that Micronesia can neither demonstrate, nor assess, any progress toward goals in the fields of education or health care at all.

US money spent in Micronesia is supposed to, “improve the quality of life, expand economic opportunity and promote efficient and effective governance,” according to the Department of the Interior. But individual Micronesians don’t need government reports to quantify the lack of development and opportunity in their home islands. They live that sad reality each day. Their tragedies far exceed the heavy costs borne by US taxpayers. That makes migration to Hawaii and other US jurisdictions an understandable choice, and seemingly the only measureable achievement of the DOI’s costly work since the 1950s.

Neil Mellen is a Grassroot Institute Scholar, and was a Peace Corps volunteer in Micronesia (Yap, 2002-05). He leads Habele, an all-volunteer nonprofit based in Columbia, S.C., serving low-income and rural K-12 students within Micronesia.