Is the Hawaii wharfage increase needed? 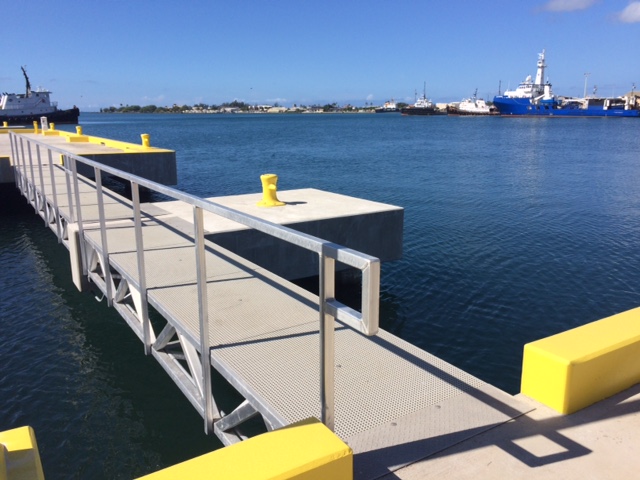 Offutt states ”wharfage rates would jump 47% over three years,” but when the compounding effects of the three consecutive annual increases (proposed for the fiscal years 2016, 2017 & 2018) are accounted for, the cumulative effect is 54.8%, which the Star Advertiser’s  Andrew Gomes reported as 55% on October 30th.

KCT was planned in the 1990’s as a reliever terminal for the heavily used Sand Island container terminals with the intention that the secondary ocean carrier in the Hawaii trade using the State container terminal at Pier-51A Sand Island would relocate to KCT and the primary carrier Matson Navigation Company Inc. (MNC) would expand from its terminal at Piers 51B, 52 & 53 on Sand Island to occupy the Pier 51A area. When Harbors began KCT planning, the secondary carrier was Sea-Land Service Inc., which became successively CSX Lines LLC and Horizon Lines Inc.

Although his comments are somewhat veiled, it appears Offutt is alluding in his six points to unconfirmed reports that KCT may have become a financial burden for Harbors both currently in terms of construction costs and in the future whether or not there is a customer for the facility once it is completed meaning it could become a White Elephant. This understanding gives the necessary context to Offutt’s critique, and makes them understandable.

When Pasha Hawaii Transport Line LLC (Pasha) acquired the Hawaii service of Horizon Lines Inc. on May 31, 2015 for $141.5 million, Harbors assumed Pasha would follow the lead of their predecessor companies and commit to relocate from its current location at Pier-51A on Sand Island to KCT.  However, there are unconfirmed reports that Pasha has so far declined to relocate and Harbors has quietly been attempting to solicit another party to undertake the obligations of becoming the operator of KCT.  It may just be a negotiating position on Pasha’s part, but either way, Harbors is unlikely to receive the revenue from the new terminal they were once counting on. Besides Pasha, there is no other likely customer for KCT.

Pasha would be facing major relocation expense including in all likelihood the need to replace the two container gantry cranes it acquired from Horizon Lines and which were originally installed at Pier 51A by Sea-Train Lines Inc. in the late 1960’s. Pasha is also in the process of replacing the four very old containerships it acquired from Horizon Lines, which it must build in a U.S. shipyard at extraordinarily high Jones Act prices, placing demands on its resources.

Offutt contends that Harbors could have used the roughly half-billion dollars being spent on KCT more efficiently for other needed projects, and the undeveloped KCT area could have been offered to potential operator to develop at container terminal under a long term arrangement with the State.

Among the projects Offutt thinks Harbors should have pursued instead of KCT is an “intermodal rail connection to carry chassis’ to/from West Oahu during nonpeak times to reduce truck traffic and congestion”  and “replacement of the fixed Sand Island Bridge in order to reopen a critical ‘back door’ in the event the sole harbor entrance is blocked.”  These would both be major projects.

Replacing the Bascule Bridge to Sand Island and upgrading Kalihi Channel through Ke’ehi Lagoon as a second entrance to Honolulu Harbor would be beneficial on several levels but faces many technical and fiscal challenges.

Likewise an intermodal rail link between the Sand Island container terminals and Kapolei in West Oahu would be technically difficult as the Oahu Railway & Land Company Ltd. (ORAL) right-a-way from Ivilei through Pearl City has been largely obliterated and the proposed rail link would need to bridge Kalihi Channel. A more direct alternative would be to operate a container-on-barge service from the Sand Island container terminals to the State’s Kalaeloa Barbers Point Harbor (KBPH) where West Oahu consignees could pick up their cargo.

On Nov. 25, the state Department of Transportation (DOT) Harbors Division will decide whether to raise fees (tariffs) to redevelop the former Kapalama Military Reservation (KMR) in Honolulu. Wharfage rates would jump 47 percent over three years.

>> Return on investment. What do Hawaii’s consumers get to justify consecutive, double-digit increases?

>> Affordability. Can Harbors fund both Kapalama and vital energy needs at Kalaeloa?

>> Alternatives. Could an operator develop the site at its own expense in exchange for a long-term contract? What options are there to building a nearly half-billion-dollar yard? Did DOT explore an intermodal rail connection to carry chassis’ to/from West Oahu during nonpeak times to reduce truck traffic and congestion?

>> Opportunity cost. What is the total of backlogged capital and maintenance requests from managers on neighbor islands?  Does the project include funds for planned obsolescence (and replacement) of the fixed Sand Island Bridge in order to reopen a critical “back door” in the event the sole harbor entrance is blocked (as recommended in past studies)?

>> Sustainability. Who signed a lease or permit to use the new yard, and was this redeveloped property made available to all through an open, transparent process? With the demise of Horizon lines, and ongoing consolidation of lines worldwide, is additional yard space needed most?

>> Buy-in. Is the proposal supported by a current Harbor Master Plan and by all of the diverse stakeholders in the last plan?

There are many wise, experienced and expert opinions on port development within the international port community. They would likely offer a better assessment of the potential and pitfalls of such a costly project; their insights should be consulted and openly shared.