The Jones Act and other regulations are sinking the shipping industry 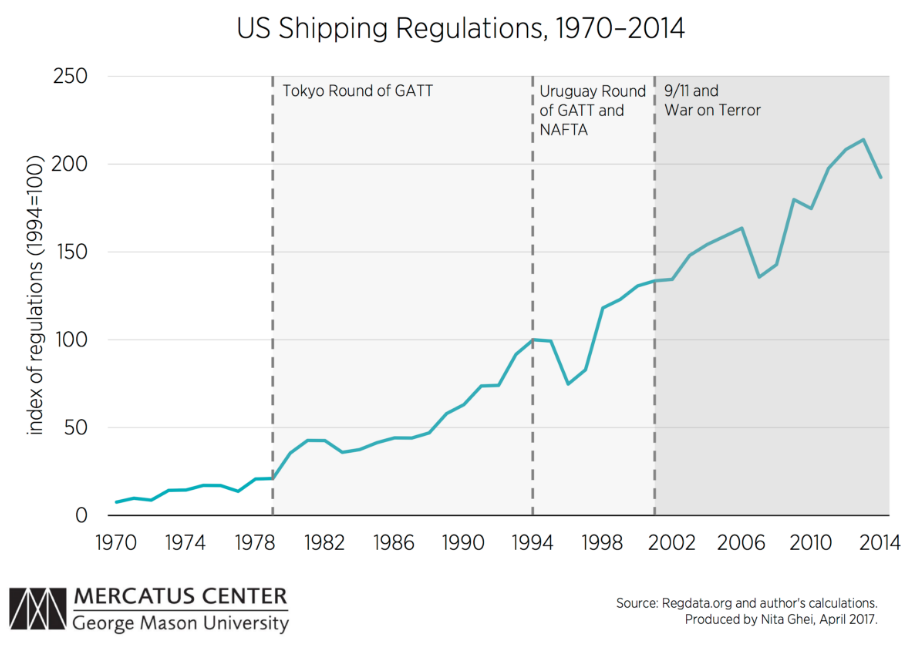 Through his campaign rhetoric and his actions since taking office in January, President Donald Trump has come out strongly as an alleged protector of American jobs, a so-called defender of the average American worker. At the same time, his administration has positioned itself as supporting a free economy and business deregulation.

The problem is that these lofty goals don’t perfectly align, resulting in Trump protecting some American jobs at the cost of many others.

Such is the case of the Jones Act, an archaic law that has long been touted as a cornerstone of American industry — or as a model for the economic failure that results from government regulation, depending whom you ask. Trump has yet to take a public stand on this prime example of protectionist legislation, but our hope is that he would call for its elimination or reform.

The Jones Act, or the Merchant Marine Act of 1920, is a protectionist shipping law that citizens of non-contiguous states and territories are all too familiar with. Claiming to protect the U.S. shipbuilding industry and national security, the Jones Act mandates that vessels carrying cargo between U.S. ports must be built in the U.S., be 75 percent American-owned and crewed, and fly the American flag.

Such regulations might have made sense 100 years ago, when the Jones Act was enacted; the outcome of wars back then were often decided as a result of battles on the high seas — but that threat has faded and these days the morass of rules that comprise the Jones Act have become the epitome of failed regulation.

Not only does the Jones Act massively drive up shipping costs, leading to crippling consumer prices, but studies have shown that it has failed to protect the U.S. shipbuilding industry and it also does not add to U.S. national defense efforts.

Today, the U.S. has fewer shipyards than any time in the recent past. Between 2006 and 2011, the Jones Act-eligible fleet shrank by over 17 percent, indicating a failure to maintain the health of the commercial shipbuilding industry. And of that eligible fleet, old and, in some cases, rotting ships have led to the Department of Defense using foreign vessels during wartime. There is also a question of whether the Merchant Marine Sailors who operate the ships on a daily basis would have the training necessary to operate the ships in a time of war.

Still, the law persists, due in large part to the massive influence of the shipping and labor union lobbyists, who have long had their hands in the cookie jar that is Congress.

Despite their too-often-successful, self-interested pleadings, backed by the considerable campaign donations they are able to marshall, the reality is that the Jones Act is a threat to American jobs, American companies and the American economy overall.

According to a recent study on regulatory barriers in the United States by the Mercatus Center at George Mason University, restrictions on the shipping industry increased from just over 300 in 1970 to almost 8,000 by 2014, an increase of more than 2,400 percent.

That’s right: In less than a quarter of a century, the U.S. government piled more than 7,000 regulations onto just one single industry.

These regulations provide the domestic shipping industry with “protection” from foreign competitors, but they come at a massive cost, including hindering new domestic companies from entering the marketplace, and decreasing incentives for existing firms to lower their costs, negatively affecting, among other things, the ability of U.S. ship builders to compete in global markets.

In other words, the very regulations enacted in the name of “protecting” and “advancing” the American economy have been simultaneously shooting it in the foot.

The U.S. industry now is simply unable to compete in global markets, resulting in instances such as buyers in Puerto Rico, for example, importing jet fuel from companies in South America rather than sellers from within the contiguous U.S. States like Maryland and Virginia import road salt rather than buy it from sellers in Ohio, and it’s more cost-effective for American livestock farmers to purchase grain from overseas rather than from domestic sources.

Instead of protecting and advancing the interests of American workers or the American economy, the Jones Act and other shipping regulations are handcuffing American industries and raising costs for consumers.

It’s true that even if the Jones Act were repealed, or even simply reformed, thousands of shipping regulations would still exist. The shipping industry still would not be able to compete on a global level, but its condition would improve, and the likelihood would increase that the industry could, one day, finally deregulate.

In the meantime, the American economy would reap the benefits of the economic liberalization. Yes, some job loss would occur in the cabotage, repair and other service sectors, but these would be outnumbered by the employment gains in agriculture, trade, manufacturing and other sectors.

If Trump really wants to help American workers — all of them — and truly advance America’s economy, he could start by removing barriers to competition such as the Jones Act. Doing so would allow more companies to enter the shipping market, thus creating more American jobs and lowering costs for American consumers. It would go a long way toward helping America be great again.

It’s time to stop pretending that the Jones Act’s perceived benefits outweigh its crippling costs. The American people should not have to wait another hundred years for relief.