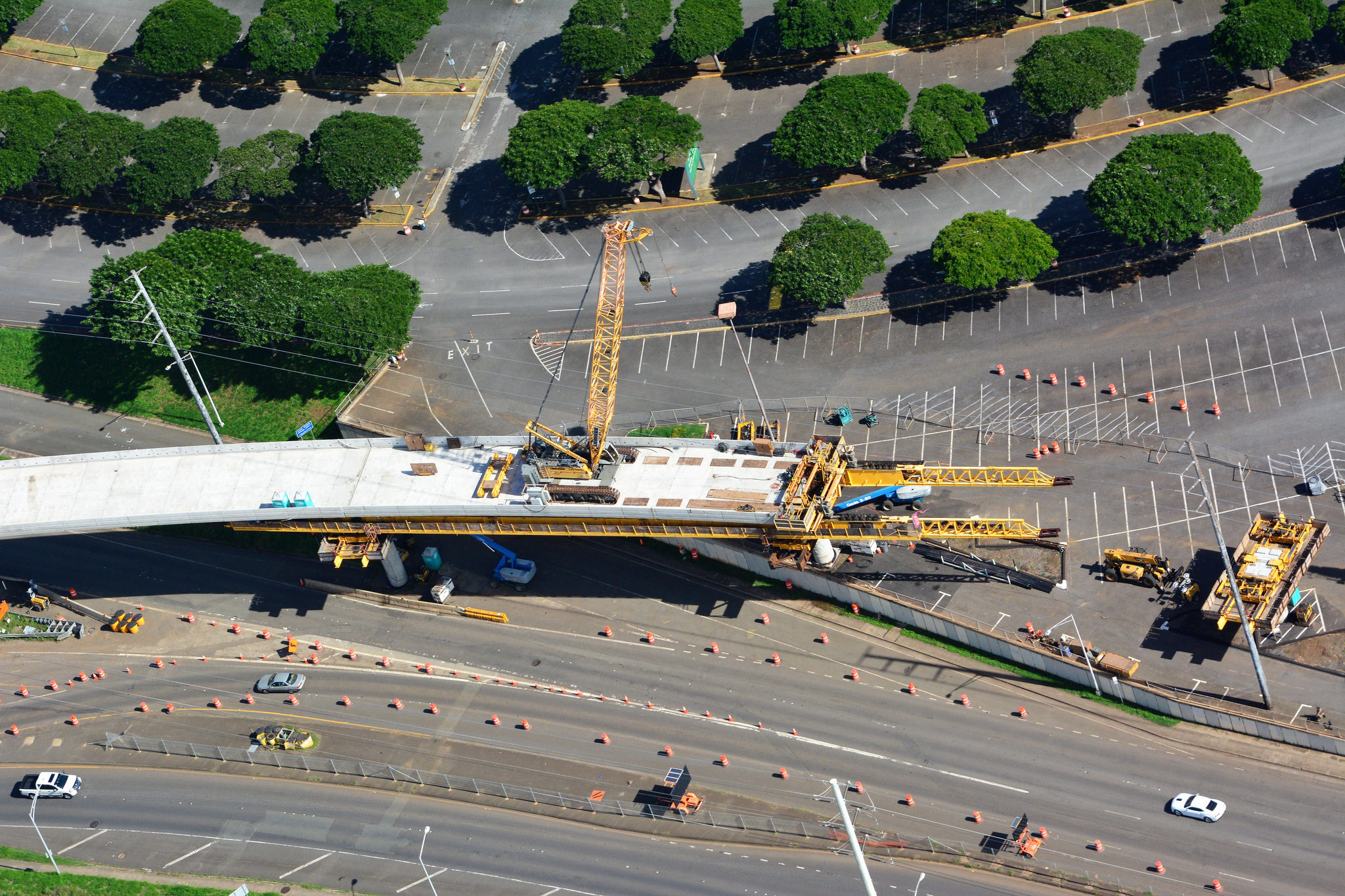 There so many good reasons to be skeptical about Honolulu’s still-under-construction rail project that it’s surprising the City and County of Honolulu was even able to get this wildly over-budget undertaking off the drawing table.

What are some of those reasons?

Well, to start with, it has long been known that large public infrastructure projects (“megaprojects”) often well exceed the official estimates of how much they are expected to cost. And by now, of course, the barely half-completed Honolulu rail venture is expected to cost at least three to four times more than was originally estimated by its proponents, with the most difficult stretch of construction still looming ahead. [1] [2]

Among other reasons? How about that:

>> It’s been a colossal traffic and business nightmare for West Oahu residents for years as its construction has slowly snaked toward Downtown Honolulu from empty former sugar lands in Kapolei. [3] [4]

>> It will do very little, if anything, to solve the horrible freeway rush-hour gridlock between West Oahu to Downtown Honolulu, which was the initial reason it for being built. [5]

>> It has encouraged suburban sprawl rather than mitigated it, as was promised. [6] [7]

>> All efforts so far to have the rail help pay for itself via so-called transit-oriented development (TOD) have failed to produce even just one commitment from private developers, nor have any private investors expressed interest in helping with construction costs. [8] [9]

>> It is unlikely to reduce Oahu’s carbon footprint, despite the best efforts of the few environmentalists who supported the project to suggest that it will. [10] [11]

>> It has been seizing private property along the rail route from innocent owners whose only crime has been to be in the way of this mammoth public works project, and whose only solace has been that their hardship of losing their lands, homes and businesses has supposedly been that it’s all for the greater good. [12] [13]

>> It will be a burden on Oahu taxpayers for decades to come, even if the project were to be cancelled tomorrow, considering how much it’s already cost, and how long it it will take to pay off rail bonds or end the special taxes that have been imposed to help fund it. [14]

>> The money spent on rail has represented lost opportunities for both Oahu taxpayers, who could have been spending their money more wisely for their own personal needs, and the city, which could have been focusing more on improving the delivery of its other municipal services. [15]

>> It has destroyed — and promises to further destroy — Oahu’s natural beauty and likely many cultural landmarks from Kapolei to Ala Moana. [16]

And those are just some of the reasons to be skeptical about Honolulu’s still-under-construction, wildly over budget rail project.

But, of course, we live in a democracy, more or less, and all it takes is 50.1 percent of those who vote on any issue or for any candidate to call the shots.

And that’s almost exactly how it happened: Just a tad more than half of those who voted — who themselves consisted of only 32 percent of all eligible voters and 22 percent of all voting-age Oahu residents — cast their ballots in favor of the charter amendment authorizing rail. Suddenly, the massive infrastructure project was off and running. [17] [18]

And it wasn’t even a fair election!

And, too, once that city charter amendment was approved, more political shenanigans occurred during the campaign leading up to the 2012 Honolulu mayoral election, in which whether to cancel the rail project was a key issue. [20]

As many of us remember, anti-rail candidate Ben Cayetano seemed to have an excellent chance of prevailing in that contest over pro-rail candidate Mayor Kirk Caldwell … until the nonprofit Pacific Resource Partnership, representing the state’s largest construction union and more than 200 construction contractors, starting attacking Cayetano through an expensive advertising and publicity campaign alleging improprieties by the former Democratic governor. Cayetano subsequently lost the election, but later sued and won a legal settlement from PRP, which without admitting guilt publicly apologized to Cayetano and agreed to pay $125,000 in damages. [21]

But the real damage was to the future of Honolulu, whose residents now can plainly see that everything all the rail opponents warned them about has come or is coming true.

Sadly, things could have turned out differently, and for the better.

Decades ago, there was a movement called “small is beautiful,” epitomized by a book of the same name by economist E.F. Schumacher and another book called “Human Scale,” recently reissued as “Human Scale Revisited: A New Look at the Classic Case for a Decentralist Future.”  The complete title of Schumacher’s book was “Small is Beautiful: A Study of Economics As If People Mattered.” Neither of the two books was particularly pro-free enterprise, but they did suggest, as their titles imply, that focusing on individuals and the little things is a better way to solve social problems than through size-large, centralized policy making. [22] [23]

This view aligns roughly with the views of “free market” theorists such as Friedrich von Hayek, Ludwig von Mises, Murray Rothbard, Milton Friedman and many others, who have always believed that working from the ground up, from the grass roots, is the preferred, more ideal way to accomplish goals that serve both individuals and society. [24]

And so it is that the most dubious thing about Honolulu’s proposed rail system is that it is, and always has been, a top-down, government-knows-best affair that has made it incredibly more difficult for real solutions to emerge from the grass roots that could address the complex problems it was intended to solve, but most likely won’t.

[15] Claude Frédéric Bastiat, “That Which Is Seen, and That Which Is Not Seen,” Articles of Interest, Mises Institute, Feb. 16, 2006: https://mises.org/library/which-seen-and-which-not-seen.

[23] Kirkpatrick, “Human Scale Revisited: A New Look at the Classic Case for a Decentralist Future,” Chelsea Green Publishing, May 3, 2017: www.amazon.com/Human-Scale-Revisited-Classic-Decentralist/dp/1603587128.