State government at work: This is not a drill 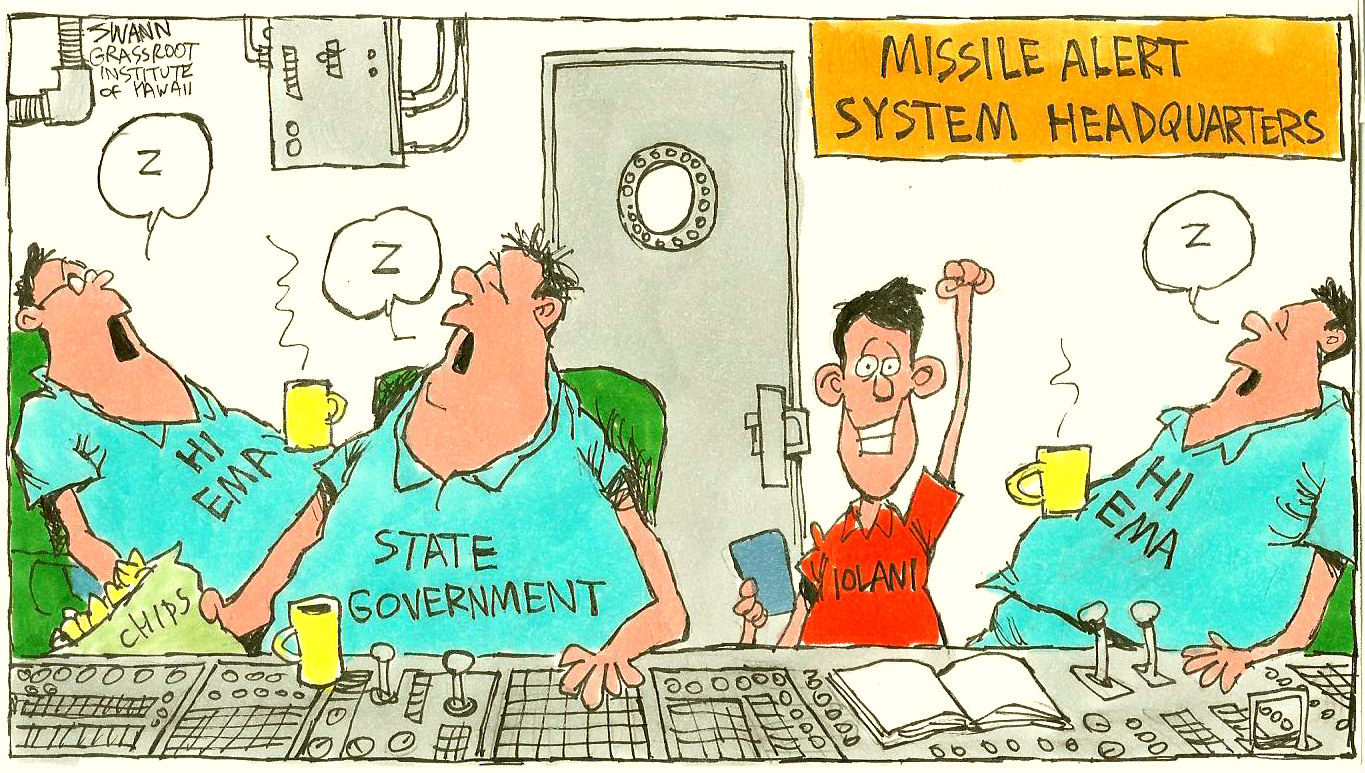 Like so many of you, I was awakened last Saturday morning by a text message with a heart-stopping warning: “Ballistic missile threat inbound to Hawaii. Seek immediate shelter. This is not a drill.”

Despite the unequivocal wording of the message, my first instinct was to see if it was true. As I sat there, wondering whom to call first, a teenage boy had the same instincts — and was quicker as well.

William Heyler looked in the phone book for the number of the Hawaii Emergency Management Agency. (Why the phone book when he had a smartphone? Because Google would take too long to load.)

He got through to the agency before the lines were jammed with other panicked calls and was told it was a false alarm.

Within five minutes of the erroneous missile alert, Heyler had tweeted to the world that it was a mistake. He beat a tweet from HI-EMA by eight minutes and the message from Gov. David Ige by 12 minutes.

In other words, a 17-year-old student from ‘Iolani School managed to reassure our citizens that they were not being targeted by a missile quicker and more efficiently than the state government.

Heyler beat the government to the punch, despite having fewer resources and less information at his disposal.

This speaks well for ‘Iolani School and young Mr. Heyler, but it doesn’t say much for our state government. As the story has spread, it has become increasingly obvious that the false missile alert was a fiasco. Not only is our state government poorly overseeing our economy, it’s even bad at carrying out basic government functions.

Imagine if we could contract out some of the services that the state has proven itself error-prone and inefficient to operate. I’m not necessarily saying it would be a good idea to put Google in charge of the missile alert system, but after what we have seen, it’s hard not to argue that it would be more competent and efficient at it — and less prone to scaring the beejeebers out of all of us.

Acknowledging that government is bad at doing its job — and worse at doing everything else — is why the Grassroot Institute of Hawaii is your partner in getting government out of the way.

Government is a bad doctor, so we helped push for privatization of Maui’s state-run hospitals.

Government is a bad financial manager, which is why our lawmakers seem to always need more money to balance the state budget.

These are just a couple of the issues that we will be emphasizing in 2018, and your support is crucial to changing the culture of our state.

For too long, we’ve seen Hawaii’s citizens accept government corruption, inefficiency and incompetence as “the way things are” in the Aloha State. But it doesn’t have to be that way.

The alert that woke us all up last week should really be considered an alarm clock. It’s time we said “Enough” to a state government that lacks the initiative and decision-making ability of a teenager.