Rosy assumptions could be thorny for Hawaii ERS 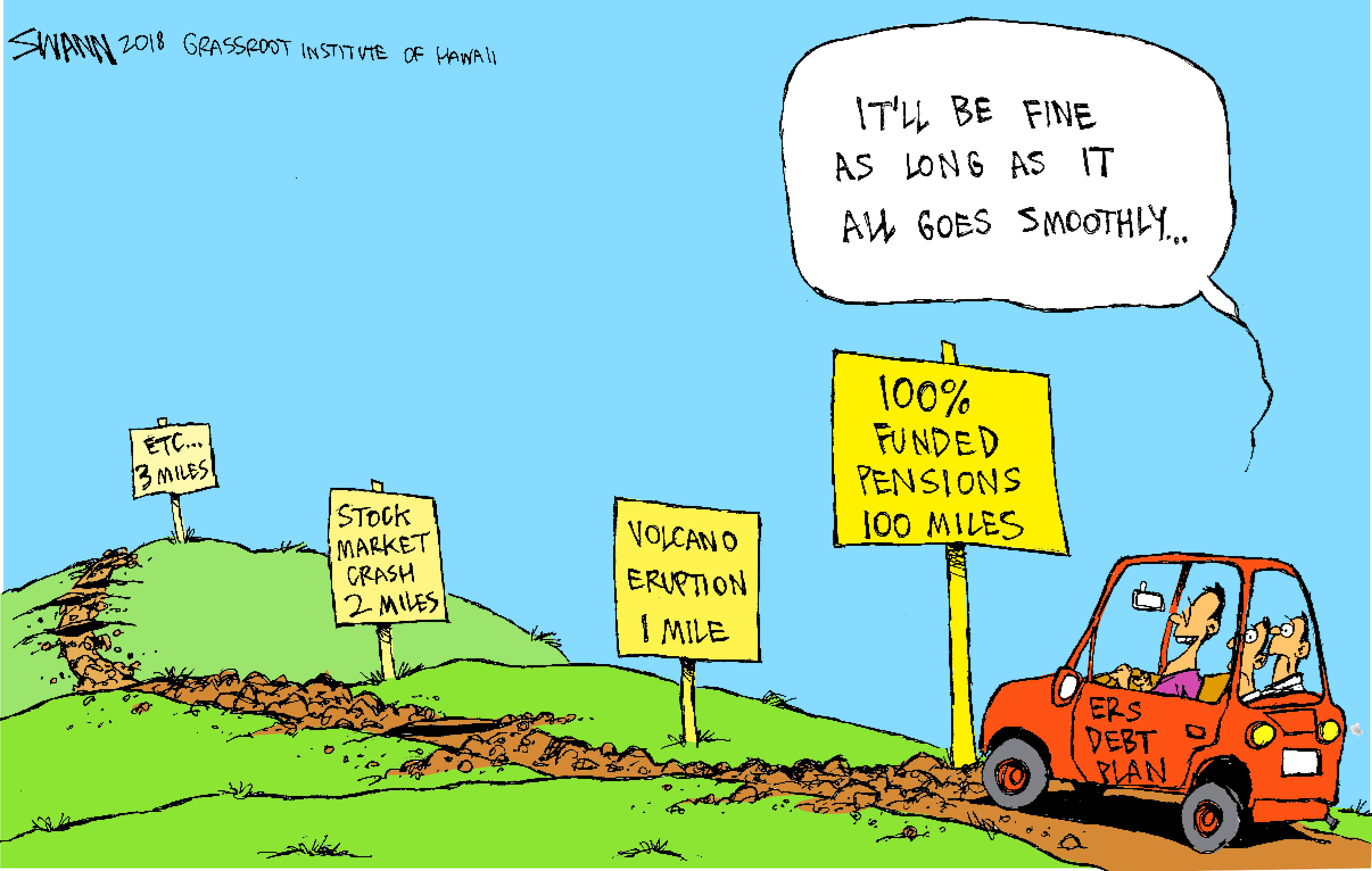 Hawaii’s public pension unfunded liability, conservatively estimated at almost $13 billion, is projected to be paid off by the year 2043, but that end date could drag out far longer if the investments of the state’s Employees’ Retirement System (ERS) do not perform as well as expected. A way to avoid the shock of such a scenario would be for the system to use less-optimistic investment estimates.

Last year, the state Legislature, at the urging of the ERS, required more taxpayer and public employee contributions to the retirement fund to help pay down the debt. This, indeed, will have a positive effect of paying down the debt over time, according to the ERS’ numbers, which estimate that the unfunded liabilities will be completely paid off by the year 2043. (See chart below.)

Unfunded liability with 7% rate of return 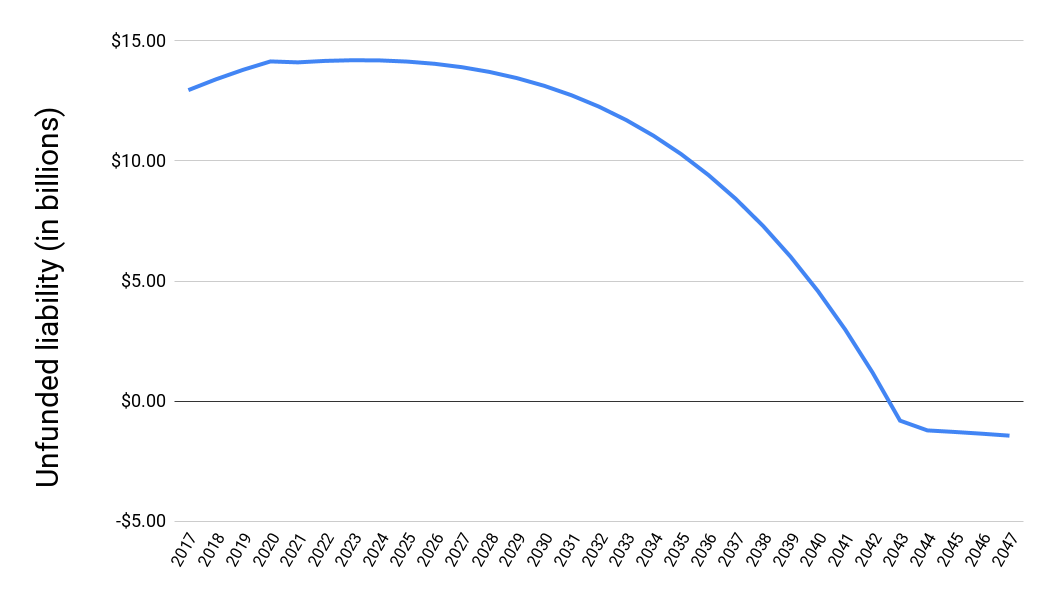 Paying off the unfunded liability would mean that the state could stop asking for millions of dollars from taxpayers to make catch-up payments on the debt. These annual required tax contributions currently amount to at least $829 million annually.

However, if investments floundered at 5 percent on average, then the unfunded liability would mushroom to $27 billion by the year 2047. Worse, if there were a series of natural disasters or a stock market crash, and the investments tanked with a negative 20 percent return the first year, followed by 5 percent returns in following years, the unfunded liability would reach $40 billion by the year 2047.

Unfunded liability with -20%, followed by 5% returns 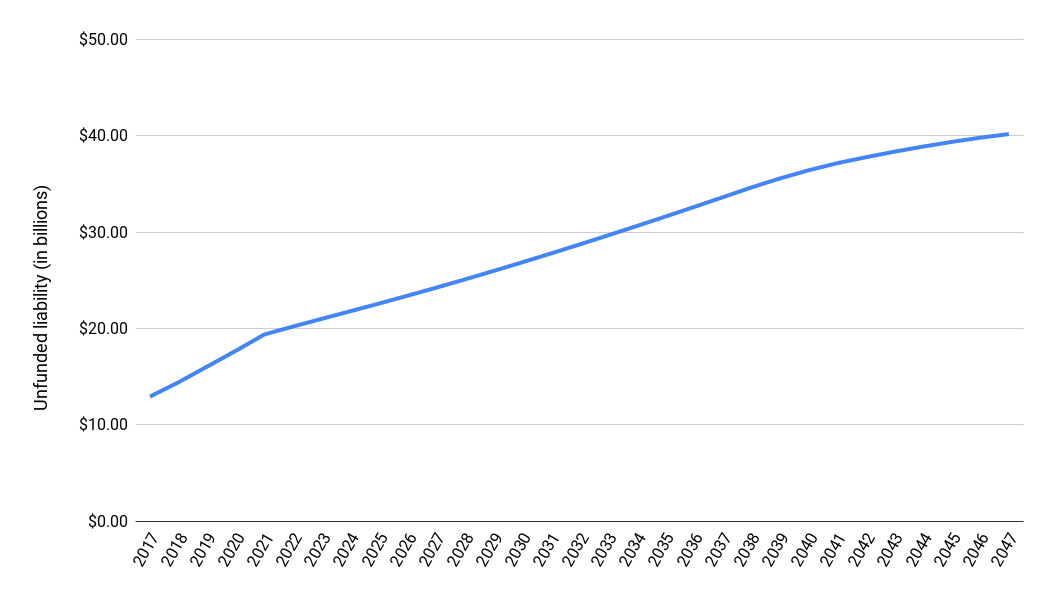 Since the fund was created, ERS investments have performed moderately well, averaging a 7.91 percent return rate. But these days it is more difficult to reliably reach the investment return rates that were common in the past.

Thom Williams, executive director of the ERS, noted this at a presentation in 2017 when he said that in the past it was fairly easy to invest the system’s money.

“You could invest in bonds, and you could achieve a 7 or 8 percent return,” he said. “It’s significantly more difficult to accomplish that today.”

For example, in 1995, a 7.5 percent return was achievable with nothing but a 100 percent portfolio of bonds (as shown in the chart below). But today, such a return requires more complex and riskier investments. 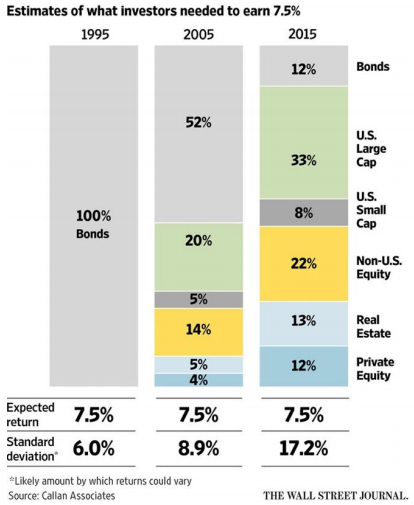 By 2015, it was much more difficult to reliably reach a 7.5 percent return rate, which is why the ERS board of trustees in 2017 lowered the estimate to 7 percent. Lowering the rate has probably helped the ERS operate with more realistic numbers, but it still might not be low enough, considering that investments have become significantly more risky.

A 2015 report from the Reason Foundation, written by Troung Bui and Anthony Randazzo, made the case that assumed rates of investment returns are typically too high in public pension plans, and should be lowered to less optimistic levels. Optimistic investment assumptions can help the unfunded liabilities vanish on paper, but won’t actually wipe out the future debt, because the market could still perform below rosy expectations.

Bui and Randazzo contended (on page 2) that fund managers should use a “risk-free” rate, based on an average yield of its own issued bonds — especially in states such as Hawaii that constitutionally protect public pension benefits and place taxpayers on the hook if their investments go south.

According to the ERS, a “risk-free” assumed investment rate of 3.55 percent, based on a 10-year average of 30-year treasuries, would result in a $30.5 billion unfunded liability this year. That’s discouraging to contemplate, but being confronted with more realistic, conservative assumptions could induce state lawmakers to select better remedial policies, such as those listed in a recent report by the Grassroot Institute of Hawaii.

Under lowered assumptions, any windfall money could go into the fund to help pay off the debt during the good investment years. During bad investment years, the state would still be better prepared to deal with the situation.

The other option is to continue to operate under optimistic assumptions, knowing that if investment yields were lower than expected, that would significantly prolong the unfunded liability debt and likely result in higher taxes for Hawaii’s already beleaguered tax-paying residents, or else cutbacks in government services.

Bui and Randazzo suggested that public pension systems should dial back their assumed rates of return, phasing in the changes over time so as not to shock state and county budgets, since higher employee and taxpayer contributions would most certainly be called for in such a situation.

Short of revising the state Constitution to allow for pension fixes that would not require raising taxes or reducing needed government functions, the case is strong for simply lowering the ERS’s investment return estimates, which would give policymakers and the public a better impression of the system’s strength or vulnerability.

Planning for worst-case scenarios would help the state be better prepared — and be pleasantly surprised if its public pension investments yield better returns than expected.