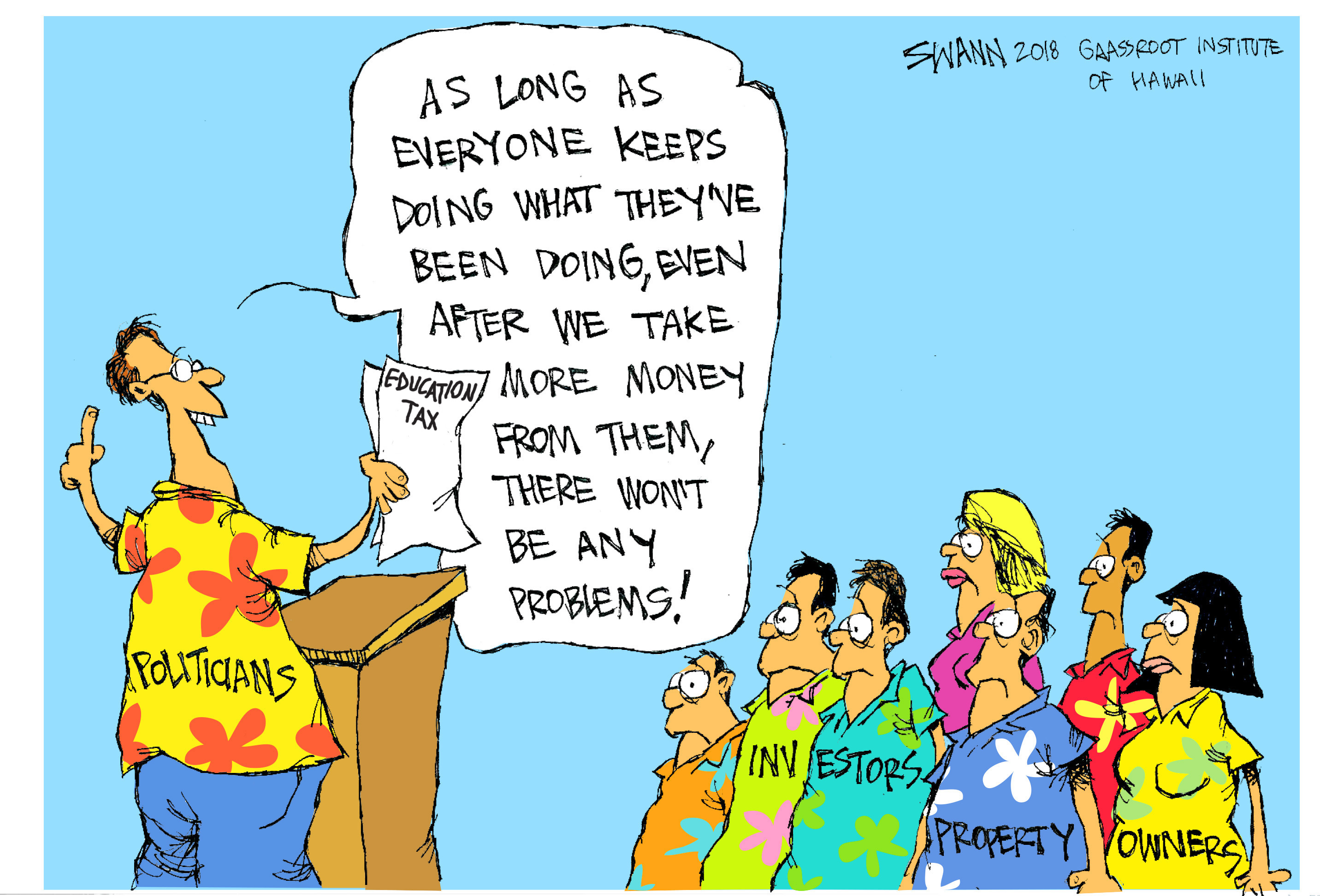 The best laid plans, we are told, often go awry. But the saying should come with an asterisk that adds, “Especially when it comes to politicians counting on revenue from tax hikes.”

Come this November, Hawaii voters will consider whether to approve a state constitutional amendment that would allow the Legislature to levy a “surcharge” on “investment real property,” ostensibly for the purpose of funding public education.

But would that proposal work as planned?

Proponents have been vague on which properties would see a tax hike and by how much. We do know, however, that its supporters hope it will raise hundreds of millions of dollars a year.

This seems like a good time to point out that it’s one thing to raise taxes enough to produce certain amount of revenue, but actual results can vary.

Consider the Philadelphia excise tax of 1.5 cents an ounce on sugar-sweetened and diet sodas that went into effect in January 2017. The new tax was projected to raise $46 million for pre-K public school programs. But just a few months in, revenues were 14 percent lower than expected, endangering the very programs it was meant to fund. In simple terms, the tax changed people’s behavior. Soda sales inside the city fell dramatically, while just outside its borders they increased by 38 percent. Philadelphia residents became 40 percent less likely to drink soda, choosing water instead.

Of course, a soda tax isn’t the same as a property tax. For one thing, it doesn’t encourage higher rents or population flight.

Which brings us to Chicago.

In 2015, Mayor Rahm Emmanuel proposed a $588 million dollar property tax increase for the purpose of funding Chicago’s police and fire department pensions. In a city where high prices already had seen many renters paying 50 percent or more of their income on housing, the property tax hike was considered a catastrophe for renters. As one economic analyst told Chicagoist:

“The bottom line is, an increase in property taxes increases the cost of holding the asset, which in this case is real estate. The owner will need to cover that additional cost, and increasing the rent is the swiftest way to do it.”

Today, Chicago leads the nation in population loss, as residents flee to escape the high cost of living.

Defenders of Hawaii’s proposed property “surcharge” say it is intended to apply to only high-value properties. But that doesn’t mean it would yield the revenues desired. Evidence shows that people often respond in ways that tax and regulation proponents hadn’t anticipated.

In Hong Kong, a premium property tax on “millionaire” properties incentivized buying homes just below the cap and then renovating them without reporting the increased value of the property. Carl Bonham, executive director of the University of Hawaii Economic Research Organization, warned the Hawaii Legislature that in the case of Hong Kong, the market responded to avoid the tax: “Home prices in the $800,000 to $900,000 range suddenly became the hot item.”

Why does it matter that Hawaii property owners and investors might not respond as anticipated and thus defeat the intent of the education tax? Because the vague wording of the proposed amendment suggests a blank check to the Legislature.

If the proposed surcharge were to not raise as much money as hoped, the Legislature wouldn’t have to stop at $1 million dollar homes. There are, in fact, no limits stated in the proposed amendment regarding which properties could be considered an “investment.”

Which means that state legislators would have to choose between expanding who gets taxed or accepting that the tax didn’t raise as much money as planned.

Which do you think they would choose?