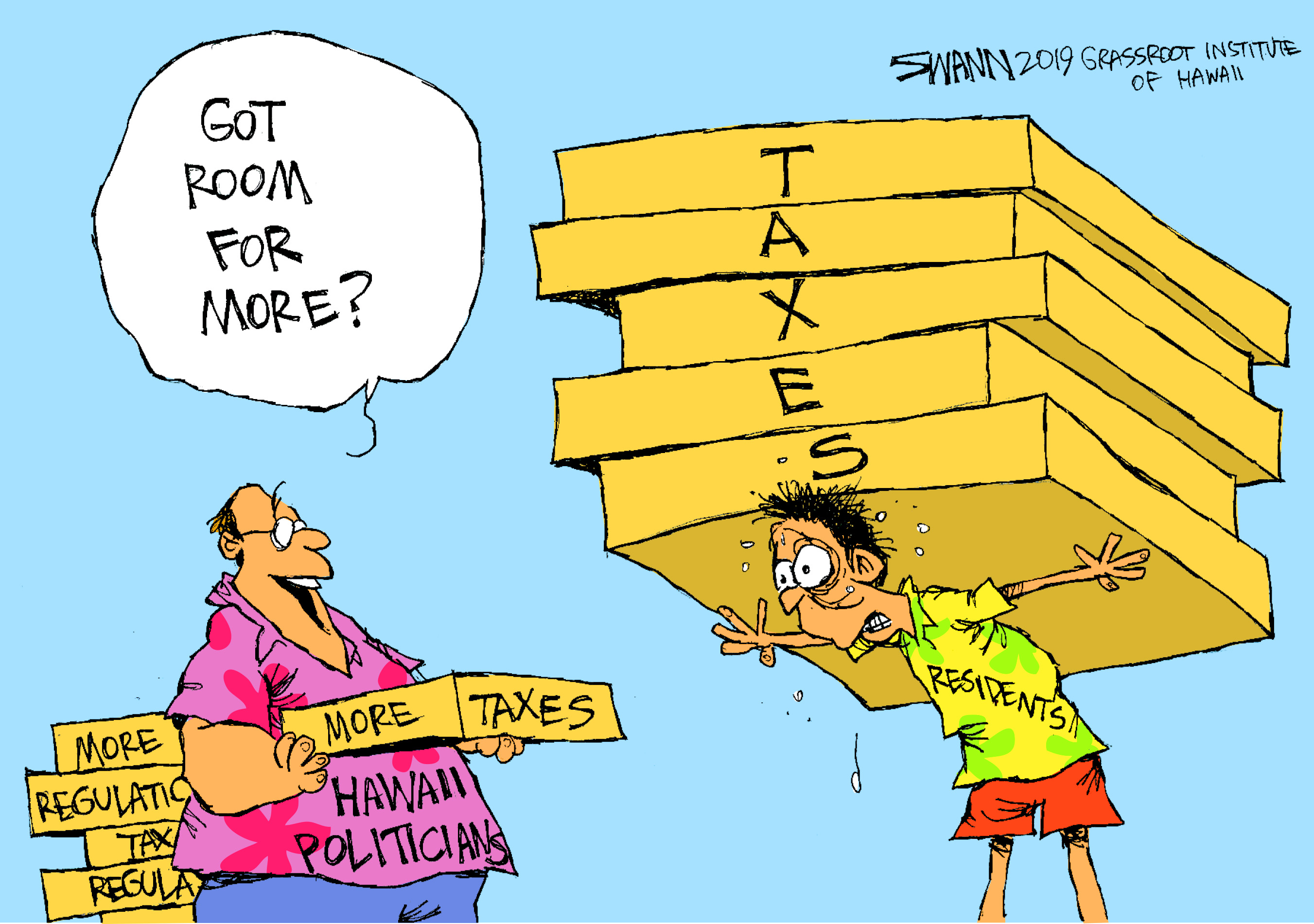 It doesn’t rank up there with trees, gifts and turkey dinners, but New Year’s Day does mark an annual tradition: increases in our taxes.

Perhaps most notable are the increases in the general excise tax on Kauai and Hawaii Island. These took effect after the state Legislature decided to let all the counties levy a transportation surcharge on the 4 percent state GET, similar to that imposed by Honolulu County for its over-budget and behind-schedule rail project. Like Honolulu, Kauai imposed a 0.5 percent surcharge, bringing the total to 4.5 percent, while Hawaii County added a more modest 0.25 percent surcharge, bringing its total to 4.25 percent.

Maui now is the only county in which the GET remains 4 percent, but don’t give ‘em any ideas, eh?

It’s worth noting that even before these new surcharges, Hawaii had one of the worst sales/excise tax burdens in the nation.

But wait, there’s more: In their efforts to meet rising costs, the counties have been increasing taxes and fees left and right.

On Oahu, Honolulu County’s vehicle weight tax went up by 1 cent a pound, or roughly an additional $30 a year.

On Hawaii Island, the gasoline tax has increased 21.1 percent to 23 cents a gallon, the third year in a row that it has gone up; in 2016, it was only 8.8 cents. Garbage fees there also are going up, thanks to a multi-year plan to increase tipping fees at the island’s landfills.

And that’s unlikely to be the end of it. All of the counties are pondering increasing their property taxes, which would be especially hard on residents who already have seen their property tax bills go up due to recent increases in property values.

When we talk about the high cost of living in Hawaii, people usually think of the big things: how much it costs to buy or rent a home, what the income tax rate is, how many jobs are available. But for some people, it’s not about the big expenses so much as the constant pile-up of fees, surcharges and higher prices.

It might look like just half a percent here or 3 percent there. But for a working family on a budget, it becomes death by a thousand cuts. It’s not one thing that makes Hawaii unbearable; it’s the belief that government can keep heaping new taxes and fees and expenses on residents who already are under strain.

If we cannot reduce spending and bring taxes and regulations under control, then next year we will see a repeat of an all-too-familiar tradition: taxes going up and more of our family and friends leaving Hawaii for better opportunities elsewhere.