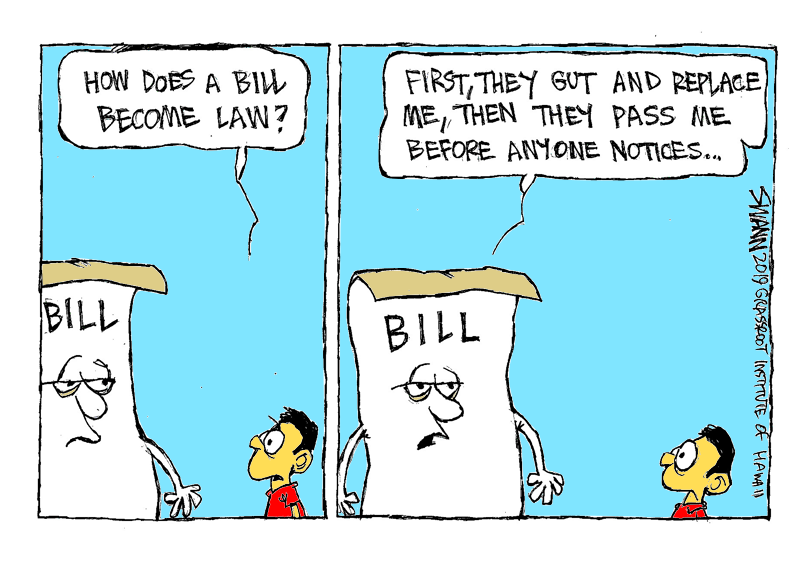 This is the time of year when the Hawaii Legislature switches into high gear. As the last day of the session draws near, its focus switches to getting bills through the conference committees and to the governor’s desk.

This is also the time of year when we realize just how far some legislators will go to get their proposals passed — even if the public gets left out of the process.

We’ve written before about the practice of “gut and replace.” That’s when a legislator takes a bill with a vague title, like “relating to taxation,” removes whatever language was in there before, and replaces it with something new and completely unrelated to the previous version of the bill.

Technically speaking, this is just an amended version of the previous bill. Amendments happen all the time. But practically speaking, “gut and replace” violates the spirit of amendments and the legislative process. This isn’t asking the waiter to bring you a bit of ketchup for your fries. It’s having the waiter replace your saimin with a prime rib dinner and pretending it’s the same meal.

A cousin of “gut and replace” is the so-called Franken bill, named in honor of the legendary monster Frankenstein. That’s when legislators don’t necessarily remove all the old content, but stuff in bits and pieces of other bills they liked. Then, the bill lurches along toward the governor’s desk with its stitched-on additions.

What makes the gut-and-replace and Franken bills especially objectionable is that they appear near the end of the legislative process, when there is little time left to do anything about it.

The victims of these tactics usually are bills that have been passed by one chamber and are waiting for hearings in the non-originating chamber. This makes them ripe for tinkering because they no longer require hearings or votes in the original house, even though the content is drastically different. The bills can then quickly be moved on to conference committee and signed into law.

Sometimes, the gutted bills don’t even pick up their new wording until they’ve moved through one or more committees in the non-originating house. So the public may not get more than one chance to testify on them, assuming people even learn of the bill’s new wording.

That’s the big problem with the gut-and-replace and Franken bills. Not only do they violate the spirit of the legislative process, but they are the epitome of non-transparent, unaccountable government. Unfortunately, they are also very common.

This year, the Grassroot Institute of Hawaii has tracked 14 gut-and-replace and six Franken bills that have survived to conference committee. Two have already been sent to the governor.

And gutted bills can have controversial contents. One of this year’s gut-and-replace measures, HB820, began its life as a bill to establish operating budgets for certain housing programs. The Senate removed that language and inserted the ALOHA Homes proposal that had stalled in the House. Another, HB1274, started as a bill about implementing computer science professional development courses for teachers. The Senate changed that to a bill that would establish a collective bargaining unit for University of Hawaii graduate student assistants.

The point is not whether the gutted or Franken bills have merit. The point is that they allow the Legislature to push through legislation outside of the public eye, with minimal debate or discussion. The public is being left out of the process.

Last year, a lawsuit was brought against “gut and replace” that argued it violates the Hawaii Constitution. The Legislature defended the practice. But it shouldn’t take a court decision for legislators to see how this tactic violates democratic principles and undermines public trust.

Legislators have the power to eliminate gut-and-replace and Franken bills. All that’s required is for them to pass a procedural rule against them.

Why not start the next legislative session with a commitment to transparency and a guarantee that every bill will get a fair, full hearing by both chambers without any sleight of hand?