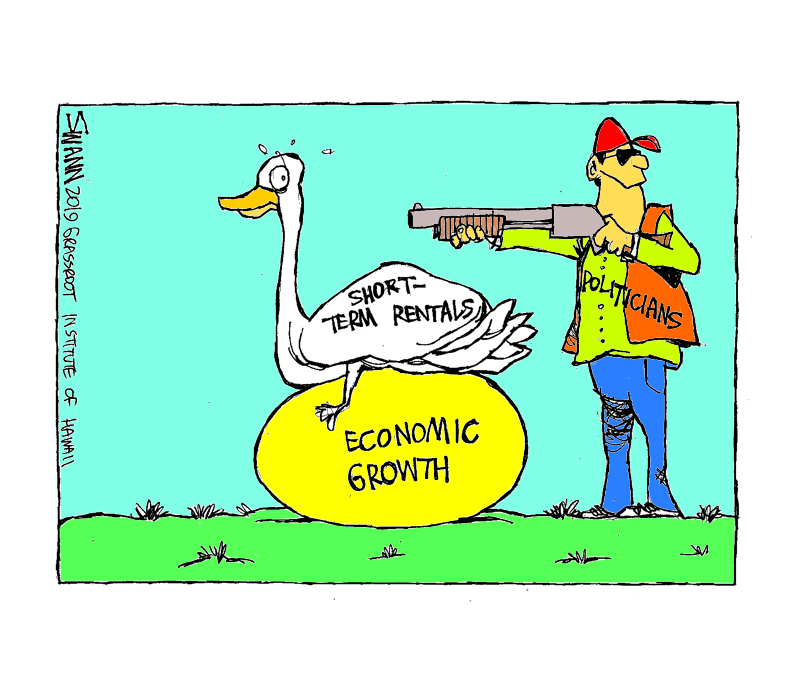 The Honolulu County Council this week approved two bills that will impose tough regulations on short-term vacation rentals, pending final approval by the mayor, and this is a cause for worry.

The regulatory scheme of these two bills is so strict that it could be called a de facto ban. If signed by Mayor Kirk Caldwell, the measures will drastically cut the availability of short-term rentals on Oahu, currently estimated to be as many as 10,000, not counting 816 that are legal. One of the bills would authorize an additional 1,175 legal units, but only bed-and-breakfast rentals with onsite hosts.

What does this mean for the state’s economy? In short, banning short-term rentals could hurt Hawaii more than people realize.

Hawaii hosted almost 10 million visitors in 2018, and, without a doubt, vacation rentals comprised a significant portion. Hawaiian Airlines CEO Peter Ingram, whose job puts him on the front lines of Hawaii’s tourism economy, told Honolulu Civil Beat in January that short-term vacation rentals are why tourism here has continued to grow, despite little growth in hotel rooms and timeshare units.

Airbnb, one of the largest short-term lodging brokers in the world, estimated that people who came to Hawaii in 2016 through its website dropped $649 million in the state’s economy —  and Airbnb is only one of the many online hosting platforms that feature Hawaii lodgings.

Opponents of short-term vacation rentals have tried to discount the significance of short-term vacation rentals by pointing out that the visitors who use them spend less than those who stay in hotels. Indeed, Hawaii Tourism Authority data that found that these visitors spend between $30 and $60 less per day on lodging than hotel visitors, and between 24% to 37% less per day in total spending, including food, car rentals and other items.

However, spending less per day isn’t the same as spending nothing. Tourists who stay in rentals are still putting money into the local economy — money that would probably disappear if we no longer had the rentals.

Why would that money probably disappear? Because we can’t assume that the visitors who stay in short-term rentals would visit Hawaii and stay in hotels instead. According to a 2016 study from the HTA, 15% of respondents said they would not have visited Hawaii at all if they could not have used alternative accommodations.

Another 2016 study, this one from the Travel Technology Association, estimated that Oahu could lose as much as $336 million in household income, 7,000 jobs and $1.2 billion in economic activity per year, if there were no accommodations outside of hotels and resorts.

That’s not just lost income; it’s lost tax revenue as well. Airbnb told Gov. David Ige that, had it been authorized, it could have collected $64 million in taxes for the state in 2018. Other home-sharing platforms also could have contributed. Given the state’s obligations and spending levels, that revenue could have been put to good use.

Yes, there are concerns about the impact of short-term rentals on our communities, in terms of traffic, noise and other considerations. However, these problems can be addressed by enforcing existing laws and, perhaps, enacting additional regulations, all while taking into account the rights of Oahu homeowners who wish to share their homes with guests.

Strict legislation that could wreak havoc on Hawaii’s economy is not what we need at this juncture. What we need is a balanced approach to regulating vacation rentals in Hawaii, and the two measures being considered by Mayor Caldwell do not fit that bill.