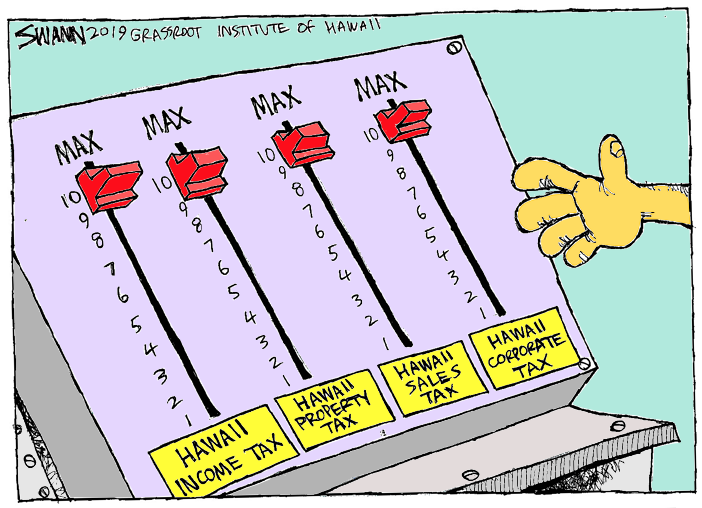 I just gave Hawaii the best economic outlook in the country, and all it took was a few mouse clicks.

Typically, Hawaii ends up in the bottom half among all states in the many surveys of economic freedom and outlook. For example, the Economic Freedom of North America report, issued annually by the Canada-based Fraser Institute, placed Hawaii at 37th among the states for economic freedom in 2018. The national Tax Foundation’s 2019 State Business Tax Climate Rankings listed Hawaii as 38th. And the 2019 edition of Rich States, Poor States: ALEC-Laffer State Economic Competitiveness Index, issued by the American Legislative Exchange Council Center for State Fiscal Reform, ranked Hawaii at 45th.

These ranking systems weigh different factors, but they all come to one conclusion: Hawaii’s tax policies and regulations affecting business, labor and the economy discourage economic growth.

The same problems are pointed out over and over again: its high top marginal income tax rate, regressive general excise tax, extensive regulation and general lack of labor market freedom.

These studies are meant to show policymakers how taxes and other government policies and programs can affect the economic outlook of a state. Sometimes, however, the results can be a bit abstract.

So the Rich States, Poor States index did something interesting this year: It added a feature that gives you the opportunity to see what happens when you change a state’s policies. Every state’s page on the Index website has an “Adjust policies” tab that lets you change everything from the state’s income tax rates to its legal minimum wage.

So I decided to see what I could do to put Hawaii in the top 20.

That took the Aloha State to 17 overall, and I did it without cutting government jobs or touching the minimum wage.

Getting Hawaii to No. 1 required more radical action. I had to significantly reduce the tax burden across the board, roll back all newly legislated tax changes and reduce the heavy proportion of public employees per 10,000 population.

Obviously, these weren’t realistic changes, considering the current political climate, but they helped demonstrate how Hawaii has slowly been shackling itself with policies that hamper its economic outlook.

So I tried something else: I enacted some of the changes the state Legislature has proposed in recent years.

I bumped up the general excise tax burden slightly to mimic the surcharges that have been proposed to fund education or kupuna (elder) care. I raised the minimum wage to $17 an hour and added more public employees to mimic the state’s barriers to privatization. I nudged property taxes and corporate income taxes up slightly, and added a few more minor taxes — think of it as contributing to the highway fund or other projects.

The results? Hawaii slid down to 49th overall in economic outlook. It might have been worse, but in some of those categories (like “sales tax” burden), it was already 50th and couldn’t lose any more ground.

As fun as it was to play with the policy adjuster and make Hawaii into a richer or poorer state, there is a lesson to be found here.

Hawaii’s economic outlook isn’t something that comes from a single big gesture. The state’s prosperity is based on hundreds of intertwined laws and regulations, touching everything from labor to fuel supply. They all affect whether Hawaii residents will be able to thrive and enjoy living in what many consider to be “paradise,” or they will cause lower economic growth and a higher cost of living, forcing ever more people to leave the state, as they have been doing in greater numbers for the past several years.

The next time Hawaii’s legislators start looking at a new tax or regulation, I hope they break out the Rich States, Poor States policy adjuster and see if they would be sending us in the right direction.