‘Gut and replace’ should be gutted 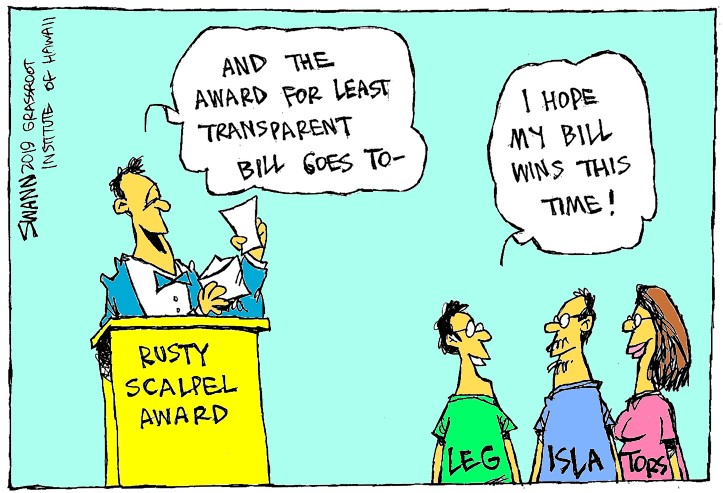 It’s that time of year again when the infamous Rusty Scalpel Award is given to some deserving bill from the most recent state legislative session, and this year the winner is House Bill 1586, blandly titled “Relating to the Structure of Government.”

The bill was introduced and passed by the House as a bill to transfer state agencies to a newly created Department of the Environment, but in the Senate it went through two makeovers and emerged as a bill authorizing the Hawaii Community Development Authority to redevelop Aloha Stadium and the stadium property, which by the time Gov. David Ige signed it carried a price tag of $350 million.

The means by which HB1586 was transformed into an expensive public works project is known as “gut and replace,” a practice that not only is a betrayal of political transparency but also a means by which the Legislature can raid the public treasury while avoiding public scrutiny.

Specifically, “gut and replace” refers to when a one chamber of the Legislature takes a bill that has already passed through the other chamber and replaces its wording with language that bears little or no relation to the original content. The new bill is often then passed through the remainder of committee hearings and signed with minimal opportunity for public input.

Which brings us back to the Rusty Scalpel Award. Initiated in 2014, it has been presented each year since by Common Cause and the League of Women Voters to the most egregious example of “gut and replace,” which this year, as I mentioned, was HB1586. In 2018, the winner was SB2858, which started in the Hawaii Senate as a measure to establish performance indicators for a post-incarceration inmate re-entry system, but when it got to the House was transformed into a bill about hurricane shelter rooms in new state buildings.

That bill was also the impetus for a lawsuit by the two groups challenging “gut and replace” per se. Nancy Davlantes, president of the League’s Honolulu chapter, explainedthat they took legal action because neither the Rusty Scalpel Award nor public shame had persuaded the Legislature to curb its abuse of the practice.

The plaintiffs lost in the lower court, but have filed for appeal. In their complaint, they argue that gut and replace thwarts the constitutional requirement of three readings for each bill passed by each chamber. What’s more, the intentionally vague titles of these gutted bills obscure the real subjects of the legislation and mislead the public.

Defenders of the practice claim that the Legislature needs the flexibility of “gut and replace” to deal with emergency situations. But that argument falls apart when you consider the winner of this year’s Rusty Scalpel. Over the past few years, multiple bills proposing different stadium development plans have been introduced. Some had hearings, some did not. But had it been vital to act on the stadium issue, the Legislature had ample opportunity to do so. Instead, it resorted to “gut and replace” tactics to push through an expensive public project while taxpayers weren’t looking.

Ideally, the courts will agree that “gut and replace” violates the state Constitution by frustrating public participation in the legislative process. However, the Legislature on its own could choose to enact new rules to stop the practice — in other words, do the right thing.

There is a compromise that would allow some leeway for emergency action while stopping the worst examples of “gut and replace”: Simply follow the example of the Nevada Senateand make a rule that no bill or resolution can be amended by incorporating irrelevant subject matter or by associating or annexing another pending bill or resolution.

The public should be outraged that the Legislature pulled a bait-and-switch to advance the stadium project. Unfortunately, we have no assurance this will be the last time the tactic is used to green-light a big expense.

If the Legislature wants to restore public trust in its governance, it should end “gut and replace.”