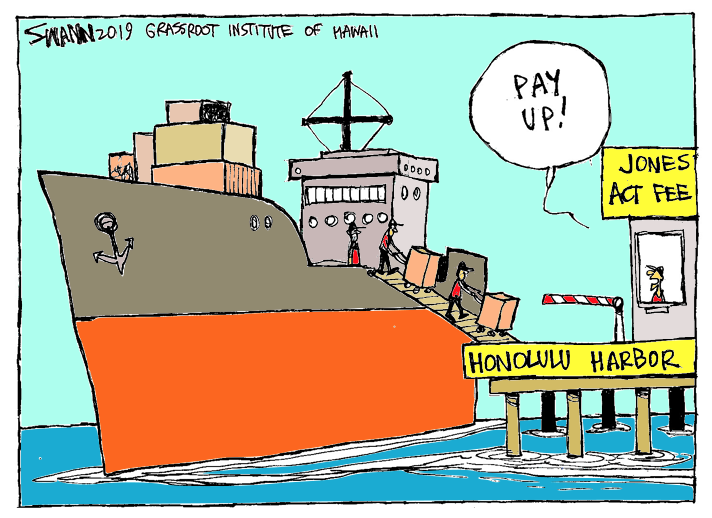 HONOLULU, Oct. 1, 2019 >> Congressman Ed Case said Monday that Hawaii is “more expensive than other areas, but it doesn’t mean that we have to extort money from the folks that live here because of an excuse like the Jones Act.”

The Jones Act, also known as the Merchant Marine Act of 1920, is a federal law that requires all goods shipped between U.S. ports to be transported on ships that are built, owned and operated by U.S. citizens.

Case spoke about the federal maritime law on Keli’i Akina’s “Hawaii Together” show on ThinkTech Hawaii. The discussion focused on many aspects of the Jones Act issue, including its costs to Hawaii and its impact on the U.S. military.

“Our military operates military sealift ships which it has at its disposal, and those are built overseas. So our military gets it that the cost of building ships for our military is probably one quarter of what it costs to build it here,” Case said.

Akina, who also is president of the Grassroot Institute of Hawaii, asked Case what he thought of the argument that “if we change [the Jones Act], we will end up with massive losses of union jobs.”

“Well, I don’t agree with that,” Case responded. “The hundreds of thousands of folks that are working in Hawaii, and their families, including the 20% that are unionized in Hawaii, all pay for Jones Act shipping.”

He said the number of workers protected by the Jones Act is actually “a very, very small number of Jones Act workers. It’s probably 3,000 Jones Act seamen across the entire country [who] are really, from my perspective, harming them [the people living in Hawaii]. Not them themselves, but the Jones Act, and the implications of the Jones Act in Hawaii, are harming hundreds of thousands of workers, unionized or not. They’re the ones that are suffering as well. Their jobs are at risk because prices are too high.”

Reflecting on the prospects in Congress for Jones Act reform, Case said, “The Jones Act lobby in Washington, which is a very powerful one, basically views any exemptions to the Jones Act as a slippery slope. So they’re not willing to simply say, ‘Yeah we understand Hawaii’s problem; we’ll go with you on that one.’

“Some of my most powerful political opponents throughout my career have come from this particular issue. These are folks that don’t like me talking like I’m talking on your show. They don’t want the public to think about the consequences of the Jones Act or the high prices. Their remedy is to keep people like me out of office, and when I get in office, they keep me from continuing in office.”

After hosting Case on his “Hawaii Together” program, Akina said, “As we near the 100th anniversary of the Jones Act, it’s important to have open and honest discussions about how the law impacts Hawaii, and what can be done about it’”