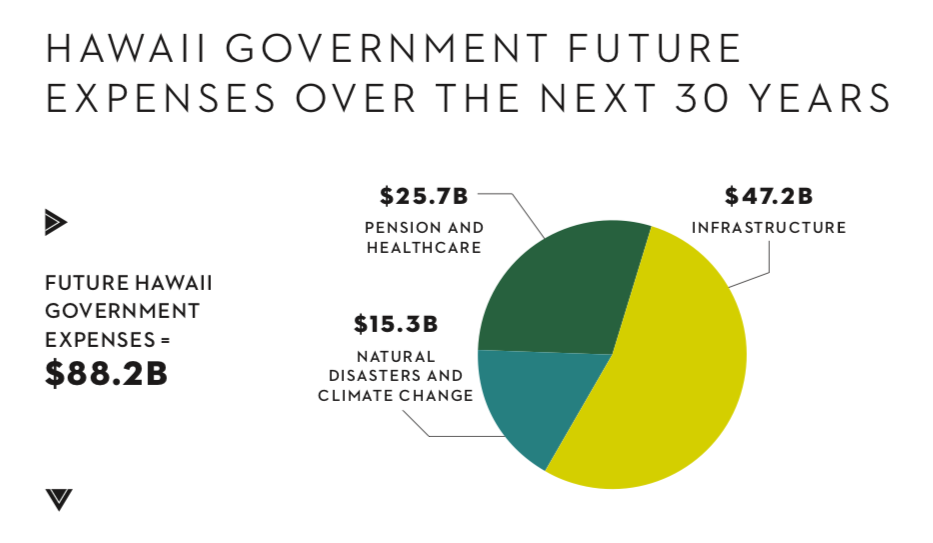 HONOLULU, Oct. 10, 2019 >> Hawaii’s state and county expenses and investments over the next 30 years are estimated at more than $88 billion, according to a new report by the Hawaii CHANGE Initiative, which points broadly to how those expenses might be handled.

WIthout going into specifics, the report recommends generally committing to “public investments in order to “build and maintain infrastructure, prepare for natural disasters and sea level rise, and meet public employee retiree and health care obligations.”

Titled “Troubled Waters: Charting a New Fiscal Course for Hawaii,” the report was presented on Hawaii Island last week at the annual Hawaii Executive Conference, which was established in 1963 to provide Hawaii executives and regional leaders a forum for exchanging expertise and ideas.

“Facing these three challenges will cost over $88 billion,” the report says. “Overcoming these fiscal challenges with limited financial resources will require strategic vision, collaboration, and innovation … The broader community needs to recognize that the status quo cannot be maintained. Change will happen whether we like it or not.”

Keli’i Akina, president and CEO of the Grassroot Institute of Hawaii, applauded the report for being a wakeup call to Hawaii residents.

“Hawaii’s future debt is unsustainable,” Akina said. “Hawaii leaders will need to make tough decisions about where to spend our limited resources.”

He added, “Hawaii’s long-term expenses will ultimately be paid for by young people, who already find it difficult to live in the islands because of the high cost of living. Reducing taxation and removing economic barriers would help lower our cost of living and grow our economy so we can better address the state’s financial problems.”

The report was produced by the CHANGE Committee on Government & Civic Engagement, led by Colbert Matsumoto, founder and chairman of Tradewind Capital Group and a former trustee of the state Employees’ Retirement System.

Matsumoto wrote in the executive summary that “the extent of future costs that state and local governments are required to meet will strain their capacity beyond any prior experience.”

In addition to Matsumoto, principal authors of the report were Sterling Higa and Jeff Laupola.

Joe Kent, executive vice president of the Grassroot Institute of Hawaii, also contributed to the report.