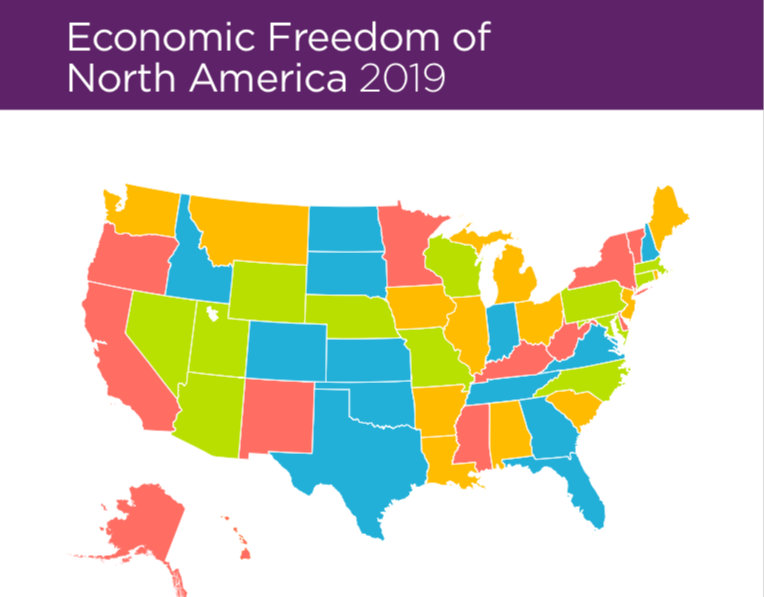 HONOLULU, Nov. 7, 2019 >> Economic freedom in Hawaii dropped three notches to 40th place among all 50 U.S. states, according to an index published annually by the Fraser Institute based in Canada and released publicly today.

The index, supplemented with information provided by the Grassroot Institute of Hawaii, shows Hawaii’s score for economic freedom dropping from 5.48 the year before to 5.41 in the latest period for which statistics are available, with a score of 10 being the most free.

Keli’i Akina, president and CEO of the Grassroot Institute of Hawaii, said, “Hawaii residents are losing their economic freedom, and would be better served if lawmakers would reverse that trend by reducing spending, taxation, and burdensome or counter-productive regulations.”

The study derived its scores and rankings based on three main categories that relate to economic freedom: government spending, taxes and labor market regulations. In all three of these policy areas, Hawaii fared worse in the latest period than in the previous year, which helps explain the state’s lack of economic mobility and notoriously high cost of living.

Among the three categories, Hawaii fared best in government spending, ranking 18th among all the states. That was a decline, however, from the previous period, when Hawaii ranked 15th. Government spending includes general consumption expenditures, transfers and subsidies, and insurance and retirement payments, all as a percentage of income.

As was the case last year, it is clear that the state requires stricter budgeting before it can move into the upper echelon of economically free U.S. states. Government spending that goes beyond what is necessary to provide essential government services shrinks economic freedom, which in turn reduces economic opportunity and prosperity.

In terms of its tax policies, Hawaii ranked as low as one can go without being last, dropping from 48th the previous year to 49th. Elements of tax policy include income and payroll tax revenue, sales tax revenue, and property tax and other taxes, all as a percentage of income, and “top marginal income tax rate and the income threshold at which it applies.”

Like last year, Hawaii ranked worst in terms of  “sales tax as a percentage of income.” The score was 0.0, just as it was the year before. To clarify, Hawaii doesn’t have an actual sales tax; rather it has a pyramiding and regressive state general excise tax, which bears heaviest on low- and moderate-income residents.

Hawaii was second-worst in terms of its top marginal income tax rate, its score holding steady from the year before at 5.0, ranking behind only California, at 3.0.

One tax category in which Hawaii improved was “property tax and other taxes as a percentage of income,” increasing from 6.93 to 7.25. But that was still worse than in the 2017 report, when the score was 8.7.

To clarify, Hawaii’s property taxes are nominally low, mainly because, unlike most states, public education is funded by the state’s general fund, not property taxes, which are left to the counties to levy and spend on their own needs. At the same time, the state’s high property values often equate to tax payments that are equal to or higher than what property owners in other states with higher tax rates would have to pay for the same amount of property.

The state actually improved slightly in the area of government employment as a percentage of total state employment, from 7.44 to 7.59, but declined from 7.44 to a second-lowest 0.66 in “union density,” which refers to how many workers belong to unions.

Akina said ideally Hawaii’s status in all these categories will eventually improve, but as this year’s report demonstrates, the state generally has a long way to go.

“Hawaii should follow the example of 39 other states that have more freedom,” Akina said. “Doing so would foster a healthier economy in which local residents could prosper.”

HAWAII’S STRENGTHS AND WEAKNESSES
(On a scale of 0 to 10, with 10 being the most free)

8.83 — Transfers and subsidies as a percentage of income

7.59 — Government employment as a percentage of total state employment

The content above was originally issued as a media release on Nov. 7, 2019.