‘Gut and replace’ has got to go 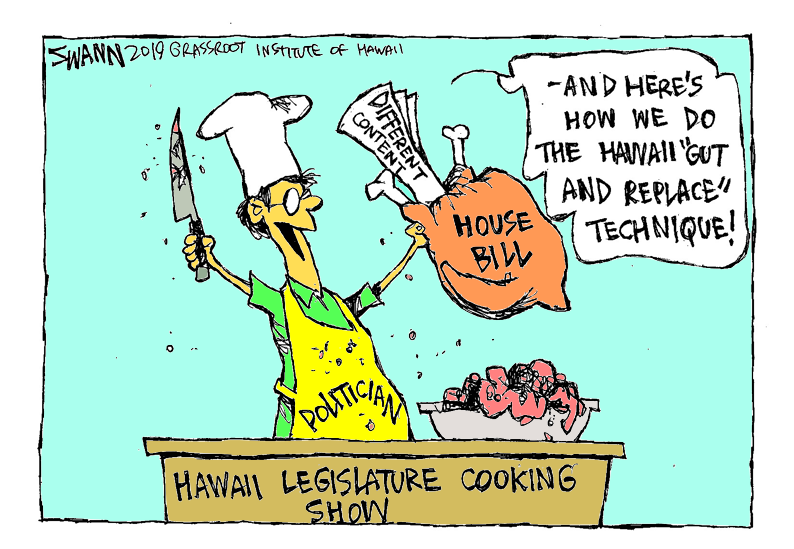 Shakespeare once wrote that, “A rose by any other name would smell as sweet.” But in the Hawaii State Legislature, the name of a bill is everything.

In fact, the name game is at the heart of the Legislature’s practice of “gut and replace,” under which an approved bill’s title might be the only relationship it has to its originally introduced version. This makes a mockery of the democratic process and undermines the people’s faith in open, accountable government.

Fortunately, the movement against “gut and replace” is gaining steam. Earlier this month, former University of Hawaii regent Jeff Portnoy filed a lawsuit against the state for gutting at the last minute the language of a bill about distance-learning programs and replacing it with a provision to change the composition of the UH Board of Regents.

As reported in the Honolulu Star-Advertiser, Portnoy’s lawsuit “argues that passage of Act 172 was unconstitutional because the contents of the measure didn’t receive three readings in the House and Senate as required under the Hawaii Constitution.”

Portnoy’s complaint comes on the heels of another lawsuit aimed at gutting “gut and replace,” filed last year by the League of Women Voters of Honolulu and Common Cause. Their legal effort was rejected in Circuit Court, but they have now applied to the Hawaii Supreme Court to hear the case.

And that’s where the Grassroot Institute of Hawaii comes in.

This week, we filed an amicus brief in support of that League of Women Voters and Common Cause lawsuit. As we explain in the brief, the important question is whether the title of a bill is everything, or whether the public deserves a real chance to weigh in on a bill’s substance.

“Gut and replace” frustrates the intent of the state’s constitutional requirement of public hearings and readings, and prevents full public participation in the legislative process. Those who wonder why voter apathy in Hawaii is at an all-time high only need to look at practices like “gut and replace” to understand why Hawaii’s voters have so little faith in government.

The Hawaii Legislature could end “gut and replace” on its own, by passing rules that prevent substantial changes to a bill that has passed in one house. It could also require more specific titles for bills and ensure that the public gets the opportunity to weigh in on the substance of every bill considered.

However, if the Legislature won’t take action, then it is up to us, “the people,” to ask the courts to uphold transparency and protect the democratic process by putting an end to “gut and replace.”