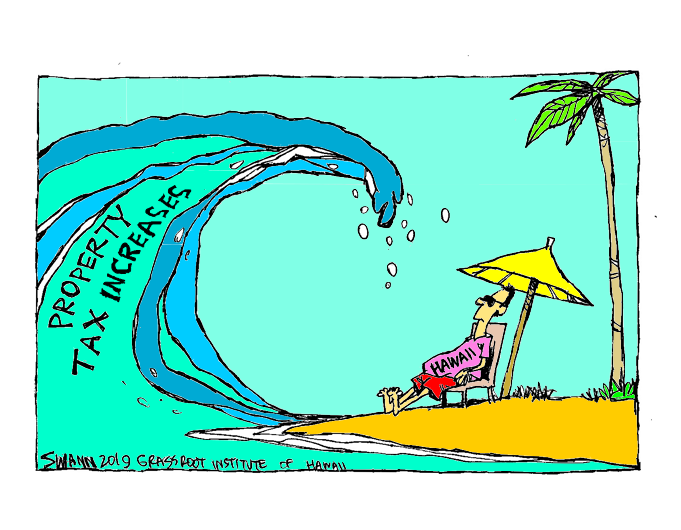 Then they came for the TVR owners, but I didn’t speak against it because I did not own a bed-and-breakfast or short-term vacation rental.

I’m sure you see where this is going …

Perhaps I should apologize to Martin Niemöller for lightheartedly applying his very serious poem to local politicians and property taxes, but there is a fundamental truth behind “First they came.” The warning signs are always clear, if you choose to see them.

Meanwhile, those political promises to not increase our property taxes are eroding as the counties find ways to nudge them up. They’ve simply chosen a strategy that generates less outrage than across-the-board tax hikes.

Last year, the state was prevented from raising taxes on “million-dollar homes” by only a lawsuit that challenged this proposed ballot measure. The Grassroot Institute of Hawaii was among those that filed an amicus brief in support of the challenge.

Now, the counties of Honolulu and Kauai are wading deeper into the property tax waters, with both moving to tax transient vacation rentals as hotels and resorts.

Until recently, people in Honolulu who occasionally rented parts of their homes — but still lived in them — were able to pay a residential tax rate. This week, however, Honolulu’s mayor signed Bill 55, which classifies legal B&Bs and other vacation rentals as hotels for the purpose of property taxes, nearly quadrupling their property tax bills. Remember that these are the legal rentals that have been abiding by the law for years.

On Kauai, the recently introduced Bill 2767 threatens to make a similar change, nearly doubling the property tax for TVR owners by forcing them to pick a commercial or hotel classification.

So why should you care if you don’t own a B&B or TVR?

Because this won’t be the end of the property tax hikes.

There is no shortage of political justifications for the hikes. We are told that higher property taxes for TVRs will help create more housing, or help curb excessive tourism, or provide funds for much-needed government programs. Those are all intangible promises, easily made and easily forgotten.

The truth is there is only one thing guaranteed by higher property taxes: They make owning property and living in Hawaii more expensive.

When raising taxes on TVRs and pricey investment homes don’t produce the results that have been promised, the next step will be other tax hikes.

It’s only a matter of time before we have a mayor or Council member trying to sell Hawaii residents on a “modest” across-the-board property tax increase, just the one time.

And you know what comes after that.