Exodus from Hawaii continued in fiscal 2019 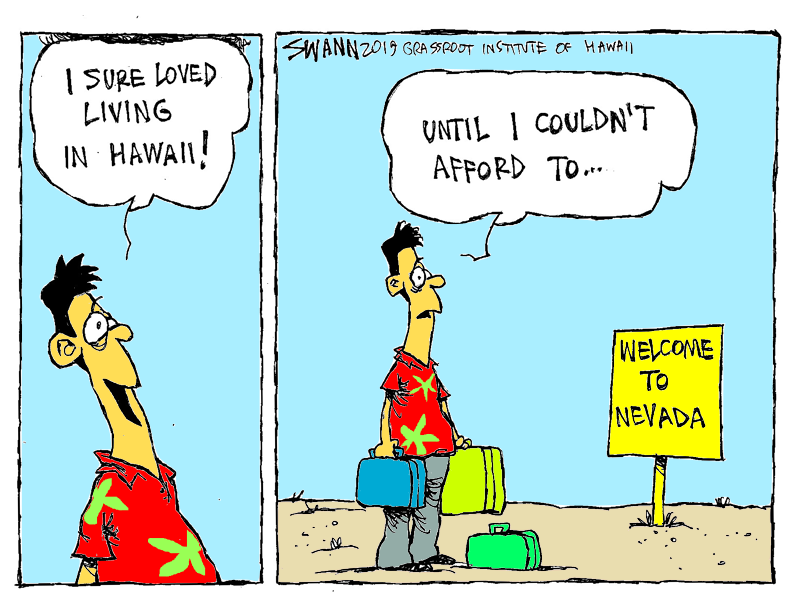 HONOLULU, Dec. 30, 2019 >> Hawaii once again suffered an annual population decrease in fiscal 2019, with a record 13,817 residents moving away, according to numbers released today by the U.S. Census Bureau.[1]

Since fiscal 2015, 49,805 isle residents have moved to the mainland, and the Grassroot Institute of Hawaii says the state’s high cost of living and lack of opportunities are major reasons.

“Our state’s population is spiraling,” said Keli‘i Akina, president and CEO of the independent, nonpartisan policy research organization. “Yet, as people are leaving, Hawaii’s government still is spending and taxing more, which further increases the cost of living. This trend bodes poorly for Hawaii’s financial future.

“Former residents tell us they leave because of Hawaii’s high cost of living, high housing costs and better opportunities on the mainland,” said Akina. “The result is that Hawaii is losing its most valuable resource: people who seek economic opportunity. Our friends and family members are leaving Hawaii and building economies elsewhere.”

For example, Ashlynn Sakaria, a former resident of Waipahu, told the Grassroot Institute as part of its “Why we left Hawaii” series, “In Hawaii, we could never think of owning a home, but here in Arizona we actually have a chance to be able to buy a home. As hard as it was to leave Hawaii, we knew we had to do better for our daughter.”

Tom and Ycrem Holloman, who moved with their three children to Indiana, said, “Hawaii’s cost of housing and food, electricity and food would have to drop drastically for us to live there again.”

Akina recommended that to stop the continuing exodus, “Hawaii policymakers should focus on lowering Hawaii’s cost of living. This could be done by reining in government spending and keeping taxes and regulations low. This would help lower Hawaii’s high cost of living so more locals could live and prosper in the islands.”
_________
1] “Estimates of the Components of Resident Population Change for the United States, Regions, States and Puerto Rico; Table 5,” U.S. Census Bureau, www.census.gov/data/tables/time-series/demo/popest/2010s-state-total.html.